Former Member
Posted on September 15, 2009 Less than a 1 minute read 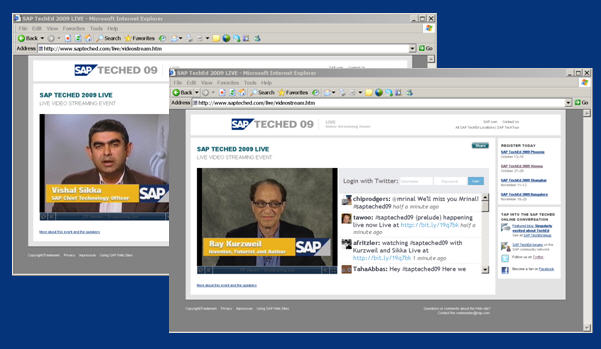 We just posted the replay, so if you missed the live event, check it out at:  http://www.sapteched.com/live/videostream.htm

Thanks to so many SAP Community Network members for joining in to make it fun and interactive by tweeting during the event.  We had a little over 600 viewers and 340 tweets during the event.  To see the conversation, search Twitter for hashtag #sapteched09 and look for tweets from Weds, Sept 9th.

Everything came together with Vishal in Palo Alto, Ray Kurzweil in Boston, and the control room in Philadelphia.  (We had one hair-raising last-minute challenge getting Ray Kurzweil through Boston traffic.  Originally scheduled to arrive at the SAP office one hour before broadcast, Ray arrived just 6 minutes before airtime.)

We’ll do some more live video / Twitter in the near future, so watch for it.