This Saturday afternoon, I saw a post on twitter announcing and linking to my most recent SCN blog post – but not on SCN, but on the front page of a pirate site, ill-formatted and without naming me as the author of the work. Having just put several days of work into this blog post, I was outraged about my content being pirated, and I still am. 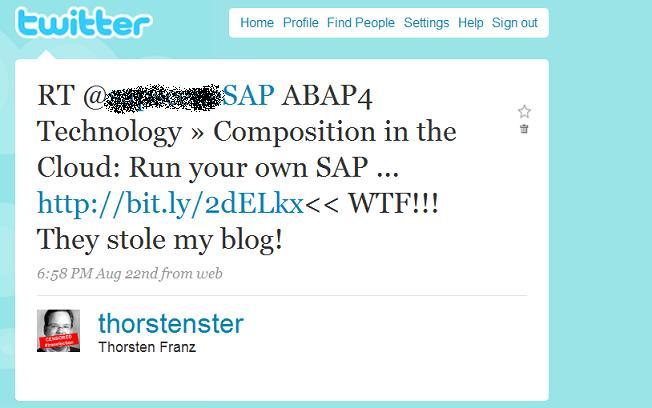 Looking more closely, I noticed that plenty of material – 1,300 blogs, wiki entries and even large parts of the SAP Library (official SAP documentation) – was stolen from SCN and illegally reproduced on the site.

I checked out a number of things: 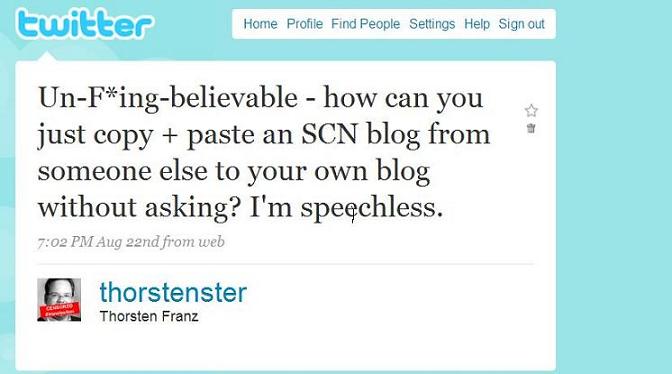 What can we do?

After my rather expletive initial tweet, several members of the SCN community joined in, helped clarify the situation, and took action. We hashtagged the discussion #blogtheft.

(Disclaimer: Surely I have forgotten or missed other contributions to the case. That’s in the nature of twitter, which makes it hard to trace or reconstruct conversation threads. Sorry!)

What can you do?

If you have blogged or contributed to the wiki or forums, find out if you’re also being stolen from, and fight it tooth and nail.

Currently, all I can do is wait. We have got several irons in the fire: SAP legal, vicious IP lawyer, Google AdSense complaint. I hope that one of them will turn out to be the hammer that smacks down the #blogthieves.

If you see this blog anywhere else but on http://www.sdn.sap.com/, you’re seeing a pirated copy. Please appreciate the irony of the situation before notifying me. This blog was written by Thorsten Franz and published exclusively on SAP Community Network.