Diversity as a Chance

In my experience teams are most efficient if their members bring about a diverse mixture of individual skills and experience. However, teamwork only can succeed, if all team members treat each other with respect. That’s what Diversity Management is all about: Employees should be enabled to fully develop their individual skills – and that starts with how people treat each other.

„Your Private Life Should Stay at Home.”

If it only were that way.

It’s not realistic to believe that the private life can be totally separated from work life. More importantly, we should try to achieve that employees are able to work without experiencing discrimination and to enable them to treat each other with respect.

Only then will the private life find its proper relation to work life. Colleagues then may appreciate each other. If that isn’t the case, quickly an atmosphere can develop that’s governed by discrimination and that dampens motivation.

There’s a series of studies in industrial psychology saying that employees who are suffering under discrimination or who constantly have to spend energy to hide their private lives perform 20% below their productivity. Companies thus waste vast amounts of money.

According to the Cologne study titled „Out im Office”, secrecy about the private life and the construction of complex lies is still common – at least in Germany. Dominic Frohn from Cologne University says that half the gays and lesbians hide their sexual identity from their superiors and colleagues. Only about 13 percent are completely open about it.

The Mission of Diversity Management

At SAP staff networks that work on these topics have been around for quite some time: http://www.sap.com/about/company/people/diversity/diversityatwork.epx SAP took this as a prompt to bundle their activities concerning the topic „Diversity“.  Diversity Management is a means to increase staff motivation and to further social as well as intercultural skills.

In 2007 this staff network received a special award for social engagement. With this award a team or a single person gets awarded whose behavior supports and encourages diversity, and whose engagement and effort within SAP furthermore strengthens the positive image of the company as a modern and open employer. 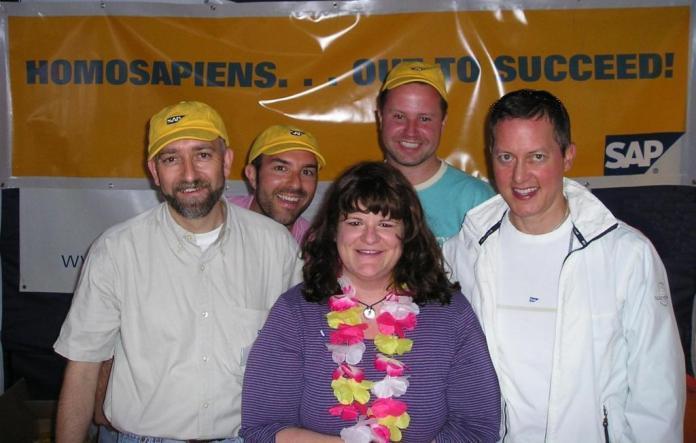 HomoSAPiens@SAP is a contact person for affected employees. It organizes regular meetings and „Rainbow Lunches” and takes part in festivals such as gay pride. The group provides a newsletter and an online collaboration room. It also keeps contact to other networks within the company and to nationwide initiatives such as PrOut at Work. In 2008 they got Max Spohr Award for diversity management activities.

Diversity Management as an Opportunity

In the USA Diversity Management has become common pratice. Especially international companies use it to educate their staff on intercultural aspects. Germany is somewhat backwards in that field.

The German study „Charta der Vielfalt” (Charta of Diversity) from December 2008 asked about the motivation of companies that have Diversity Management programs. The following aims were mentioned:

I believe that these aspects can also be of interest to many German companies, including medium-sized ones. This is in particular important for companies in the public service sector, if there is an image problem.

As I’ve learned from the study mentioned above, companies with Diversity Management are more attractive to university graduates. The same is true for other groups of high performers.

For me this aspect makes sense as high performers often show individualistic traits. That’s no surprise for often to them the success of a project is more important than the process.

At the same time they are the ones who recognize weaknesses in processes and who have the courage to improve them. In turn the company also must have the will to support the individuality and creativity of the person. To me it seems clear that Diversity Management is an important step in that direction. It can also have the effect that a person who deliberately chose an employer, will identify even stronger with the company later.

An important aspect are staff networks. They can support the development of education and development programs for executives and their teams. They also can support internal divisions such as marketing, communications, recruiting, customer contact or human resources. This is an economic factor which should not be underestimated. There are studies that show that a modern, queer-friendly image of a company is a crucial criterion when customers make their buying decisions.

I want to thank the members of HomoSAPiens@SAP. I met them by chance at gay pride (Christopher Street Day) in Frankfurt/Main and they patiently answered all my questions concerning Diversity Management in general and at SAP in particular.

I can only congratulate them, because they have been worthy representatives of SAP as a modern and open company.

Thorsten Franz
July 27, 2009 at 12:06 pm
Hi Tobias,
Thank you for this interesting and convincing presentation of a topic I didn't know anything about. I believe that companies can only benefit from implementing a diversity management program. Even employees who are not part of any particular target group will benefit from the general improvement in work climate that results from a heightened awareness of the diversity and individuality of people.
Cheers,
Thorsten

Jon Reed
July 28, 2009 at 5:51 am
Tobias, like Thorsten I did not know anything about diversity management at SAP, so thank you for this post. I could not agree more with Thorsten's comments that a more open and diverse company culture is of benefit to all employees. Cheers to those who are leading the way.