No type of correction can be released during this phase.

If there are still any open TRs, you have to return to the Development with Release phase and repeat the process including the test phase to ensure that any open requests can be released and transported.

These orders were imported in SMM: 300 when I run task “Import Transport Request” in SMM: 300, production system:

All TRs that were in the production import buffer are imported.

When you import a TR in quality system this order is added to the next import system buffer, usually production system buffer.

How to handle the situation and why can’t it be solved.

The IMPORT into PRD is a pour call of TMS functionality, so we can not manipulate the import queue.

Which this information you should contact the colleague who owns the correction, mainly the SDHF correction and solve this, means forcing the colleague to test his SDHF.

So this means, it is not recommended to switch to status going-live  and import immediately, because you always have to check the import buffer before import, by checking the status of the SDMN transaction.

This describes the process how it should work.

*In the case of these two SDHF corrections  8000001075,  8000001077 and 8000001091, in “To be tested” and “Successful Test” and “Authorized for Import”, after running the Import in SMM:300 I can go with these corrections until Completed status because these TR are already in production.  No new import into production system is done because with the tp import ALL these TR are deleted from the production import buffer.

With these correction statuses I change the phase to from “Go-Live” to “Being Completed” phase: 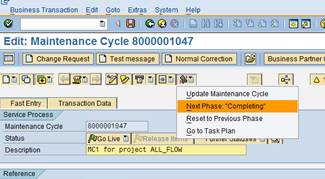 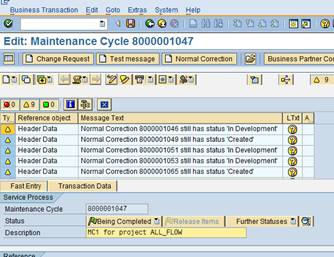 I'm thankful of your existence! I understood better the flow of the ChaRM thanks to you. But now i have a simple question whose i haven't tested yet. What make the liberation to the normal correction (SDMI) to be imported to production environment? Is the action "Production"?