TRs can be released from within a regular correction.

For regular corrections, the administrator has to use the task list to import all released corrections into the test system or he has to schedule regular import batch jobs.

If any regular corrections exist whose status has not yet been set to Tested successfully when the maintenance cycle phase is changed from Development w Release to Test, the system issues a warning in the SDMN document. These corrections are then excluded from the integration test and cannot be released.

With these correction statuses I change the phase to from “Development with release” to “Test”: 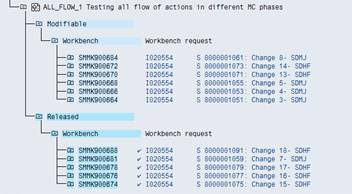 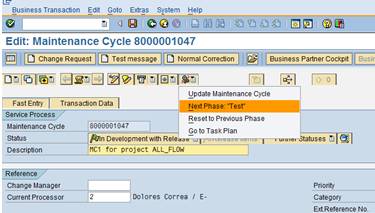 In Test phase the code is freeze, I mean, you can not release any request, so if you want to be able to work with these corrections you should go back to Development with release phase.

If not, only these corrections will be included in the actual test and go-live:

During this Test phase you can work with SDMJ in Status “Consolidated” and with SDHF corrections.

The other will be included in the next test phase, SDN Blog: Change Request Management scenario: Working examples “Test” phase

Former Member
November 26, 2009 at 2:00 am
Dolores, thanks for the helpful blog. One question regarding the comletion of development. How does ChaRm make sure that after a correction has been completed by the developer and released as ToCs no more tasks are added and released until the phase is swithched by the IT Operatoer to the phase 'TEST'?

Dolores Correa
Blog Post Author
December 1, 2009 at 12:06 am
Hello Nico,
You are right, solman can not control this, I mean, this only can be done avoiding via authorization in the development system to avoid a user can add a new task to this transport order.
No way to control this from solman, sorry,
Dolores

Former Member
December 1, 2009 at 2:17 am
Dolores,
thxs for your comment. Yes I would appreciate to do it via authorization. But if you remove the developers authorization to create new transports/tasks in the development system they also cannot do it via Solman/ChaRM or am I wrong?
We are not really happy with this process as it could be an audit issue?
Nico