It was 2005 when I first found myself logging into SDN. It was a time when the first SAP XI project was being taken up in my organization. I remember most of us who were a year or so into their first job were working with ABAP so the new technology in town was pretty much a mystery to us.

When I first saw SAP XI written in an project assignment mail that came to me, I interpreted it as to be SAP Eleven 🙂 Seriously !!

Hey but you cant blame me cos I was more used to people telling me about R3 versions like SAP R3 4.6c, SAP R3 3.0f etc at that time. So here I was thinking to myself, “Gosh from 4 they just took one huge leap to 11??” But I was lucky enough to be corrected by some gem of mentors and seniors. One of them told me to grab the opportunity cos Netweaver was the next HOT thing in town, and I did.

Things weren’t easy back then. If you went into SDN to the XI space you would have found a select number of blogs. The forum posts usually went unanswered unlike today when a post receives at least an average of 5-6 replies. But then even a single reply used to be pointers, and I found that the community actually benefited not only by the answers but from the questions also.

Tip – Search SDN especially the forum area on any question you have before you post. You will find plenty of information already there.

So soon, SDN became part of a day today activity. It became the learning center, the place to go to, the place where you sought information. Eventually we all come to realize that with learning, sharing is also an essential part. That is how I started posting some of my first replies to queries.

Tip – People enjoy reading answers but dont post irrelevant links. It can irk most. Try to be specific to the question. Try to be original.

At one stage you realize that explaining some of the things what you did can help others who have the same requirements. Blogs, found a huge fan following. You could be quite descriptive and explain something extensively through a blog. There wasnt wiki then, so it was all about blogs and articles and so in June’ 2005 I wrote my first blog.

Tip – Try using wikis … they are much ‘cooler’ than blogs

There used to be a reward for each category of contributors who used to achieve certain milestones (250 ,500, 1000, 5000 points etc) over a month. One day reading through a blog I found that SDN was to give out an iPod Mini in a lucky draw to select number of contributor for achieving such milestones. One of the following blogs on the same had my name in it. I received a 4GB iPod mini (my first iPod) with a thank you note from Mark Finnern. Guess they have discontinued such rewards, thanks to Recession and Cost cutting. But then at one stage you realize there is a bigger reward than an iPod 🙂 As you help thousands of user logged in with answers and solutions, some reward you with points. But some go beyond that to personally thank you maybe over a mail or a call…. some of these conversations at times lead to a friendship. Moreover, there might be times when the same folks help ‘you’ find a solution.

Tip – It isn’t about the iPod mini. What can make your day is a thank you mail or a phone call from a fellow SDN’er whom you helped find a solution.

2009 has been a wonderful year. It’s an year of new beginnings for me. It’s an year which saw good times emerge after the hard hitting global recession, it’s an year that saw my country (the largest democracy in the world) vote for stability and growth leaving behind all differences, it’s an year I married the love of my life and it’s the same year when SDN awarded me the SAP Mentor position 🙂

Tip: Consulting in SAP is not only about how much you know about the subject but also about how many contacts you make in the industry. It’s a combination of your technical and social skills, if I may say so 🙂

Today if you ask me, if it really was a good idea to have logged onto SDN? The answer would be a definite ‘YES’.

I wanted to take this opportunity to thank SDN. Hope to continue contributing and keep on learning from others contributions. 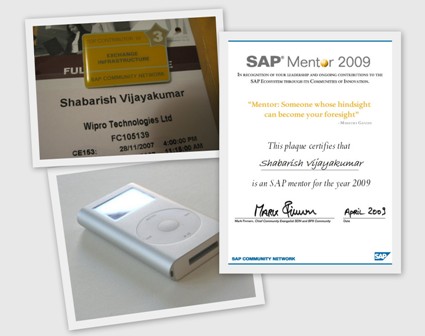 Former Member
July 20, 2009 at 3:16 pm
It's great to hear your story. Thanks for sharing it. I hope you will show many others that it is worth participating.

Former Member
July 20, 2009 at 6:20 pm
Yeah, atleast this would be a driving force for our fellow folks to join the bandwagon.
But I guess most of the folks encounter either of these issues in getting on to SDN.

1. Being Lazy
2. Forgetting the userid and password of SDN(it might sound silly, but I have spoken to many guys who fall in this category)

Shabarish Vijayakumar
Blog Post Author
July 20, 2009 at 6:35 pm
Being Lazy??? 🙂 Well... even if they dont want to contribute at least login in and spending some time might indeed give a 'lil' bit of insight into the happenings of the SAP world ... and forgetting the user id password ... haha ... now that is completely off the hook !!!

Former Member
July 28, 2009 at 2:34 pm
Well done Shabarish.  I like the organization and presentation of your thoughts here. This helps us all understand the value you derive and some of your personal best practice philosophies.

I really feel it is worth to attend SAP TechED every year :). SAP TechEd not only gives an opportunity to meet with others professionals or friends but also it provides a platform where we can learn new products before they come in our organization.

I remember, I never attended PI/XI training in my life:) I totally read SAP PI study material and explored PI Blogs/Forums/Wiki on SDN. So I can say it is a nice example of spending time on SDN and attending TechEd 🙂

Former Member
November 4, 2009 at 10:23 pm
it is true, we can learn anything in SAP with SDN. almost my SAP XI learnings are from SDN only.

I am Really very happy to see how SDN is changing
the people's life.
I also get a lot and performing very well in my profession.
Your way of thoughts and ideas in this mail is very touchy and real.

Thank you so much for your efforts and all.