SAP PI7.1 not only brought a great deal of functionalities but also had some secrets with it. In this blog I will try to unveil one such not so known secret of SAP PI7.1.

Many times we need to route a message to a particular Receiver based on some value in the source message. How can I manage to do this? Simple, by specifying the corresponding condition in the Receiver Determination. But now PI7.1 has its own way of specifying the condition.

More information about Interface Patterns can be found here: 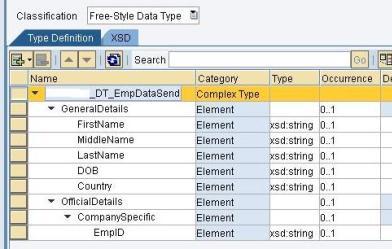 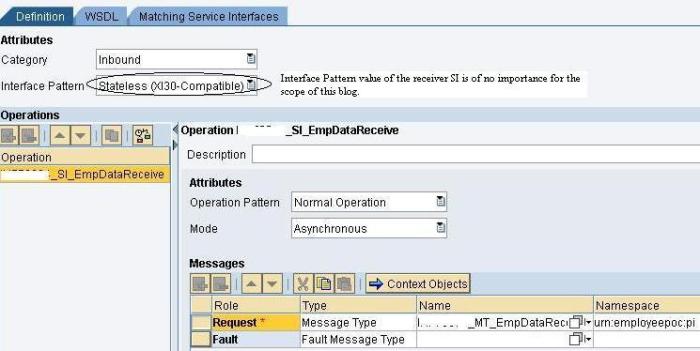 For the scope of this blog there is no restriction on selection of Interface Pattern of the receiver Service Interface.

A simple mapping program is implemented between the source and target structures: 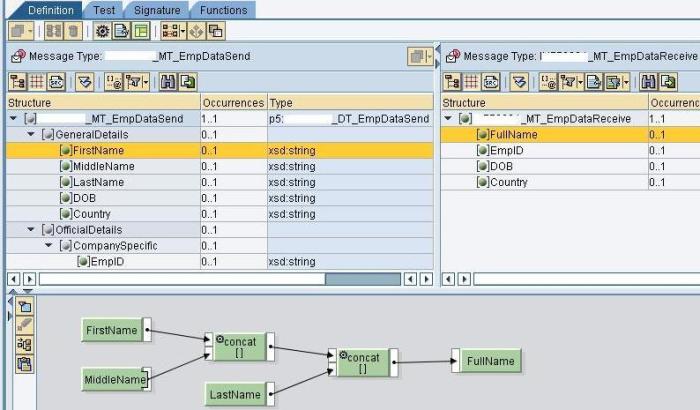 Below is the final list of objects which are created in the Enterprise Services Builder for this interface: 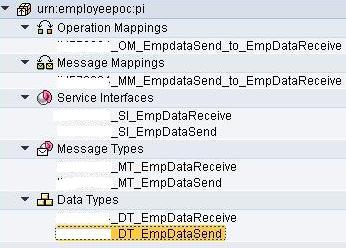 Once all the relevant objects are created, make sure that you save and activate the changes.

In Integration Directory below objects are created for this interface:

All the objects are maintained in the same way as it was for PI7.0 (barring the receiver determination). Below figure depicts the complete list of configuration objects created:

Now we move on to create the condition in Receiver Determination. A logic needs to applied such that the file is routed to the receiver only when the MT_EmpDateSend/OfficialDetails/CompanySpecific/EmpID field exists and is not blank. When you open the condition editor of the Receiver Determination and try to define the left operand, you wont find any message structure available. This is due to the Interface Pattern value that we selected in the sender Service Interface. Below figure will depict how the left operand has to be specified: 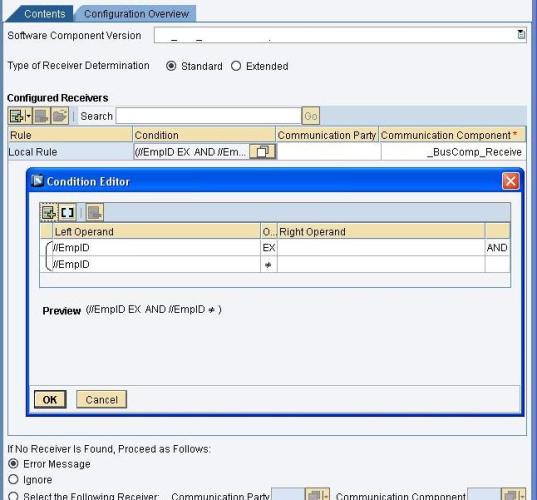 Checkout how the left operand is specified! The actual field name has to be used and needs to preceeded by “//”; so now our left operand becomes //EmpID. Question that should now come to your mind is where should I specify //EmpID? It needs to be specified in the XPATH section of your Expression Editor.Condition definition for Interface Pattern Stateless (XI 3.0 Compatible) remains the same as it was in the earlier versions.

Once the objects are created ensure that they are saved and activated. Now we are ready for testing our scenario. Place the relevant file in the source directory mentioned in the sender FILE communication channel and if all the configurations/ condition criteria are met, then you will find the output file in the configured target directory.

Now the question before me is how should I make you believe that the above mentioned settings worked for me and the file was routed as per the condition? For this you can check the below trace details from SXMB_MONI: 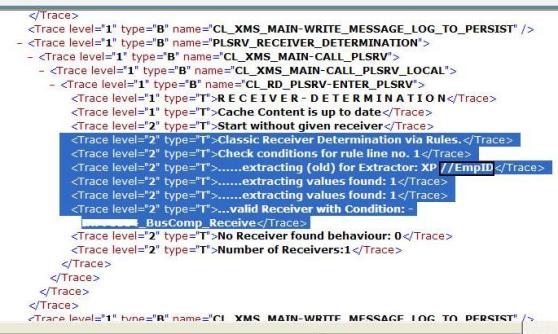 This is all folks! Thanks for taking out time to read this blog. I hope that it will benefit you to some extent.

Former Member
July 15, 2009 at 5:22 pm
During the migration process problems have been reported for this blog. The blog content may look corrupt due to not supported HTML code on this platform. Please adjust the blog content manually before moving it to an official community.

As per SAP Help section, Context Objects can be used in the Condition Editor of a Receiver Determination. Personally I have not yet experimented this option; however will update the blog once a handson is done with Context Objects.

One doubt! You have given like prefix "//" to aaccess the field in source message. What about if we have two fields with the same name in the input data type. There might be ambigutiy while picking up the right field.

abhishek salvi
Blog Post Author
July 16, 2009 at 4:00 am
Hi,
In that case you will have to use Interface Pattern as Stateless (XI3.0 Compatible) and then using XPATH develop your condition; or create a Context Object and use it to define the condition.
Abhishek.

In case of IDOC sender, IDOC structure will be visible in the Receiver Determination, so you need not follow this blog. In Interface Determination, irrespective of the PI version and whether it is an IDOC or not, the entire message structure should be visible in condition editor.
I am not sure of your problem at this moment, however did you make use of Receiver Rules? In that case you would not be able to make use of XPATH. Below is the statement taken from http://help.sap.com
Note that you cannot specify expressions using XPath when you define conditions in receiver rules.

One more point which I would like to highlight is that from SAP PI 7.1 with Ehp1 (SP005) the structure will be visible in Receiver Determination and from this point onwards you need not manually write the content in the expression editor.

Actually I am looking for a condition in Interface determination where in different interfaces will be picked up based on payload values of the incoming messages.

The problem I am facing over here is I am not able to see IDOC structure (in XPATH option) in my Interface determination drop-down and that I had to enter the condition manually.