In the Crystal Reports and SAP BW Hierarchies – Part 1 of 2of this two part blog we created a Crystal Report on top of a BW hierarchy. In the second part we will take the report and enhance it so that the user can use a drill down along the hierarchical structure

Before we are going into the creation of the formulas here the logic:

>>> This means I need a parameter in Crystal Reports

The information we need from Crystal Reports now is:

First of all I go to my Field Explorer in Crystal Reports into the area for Parameter Fields and create a new Parameter to allow the user to enter an initial hierarchy level. 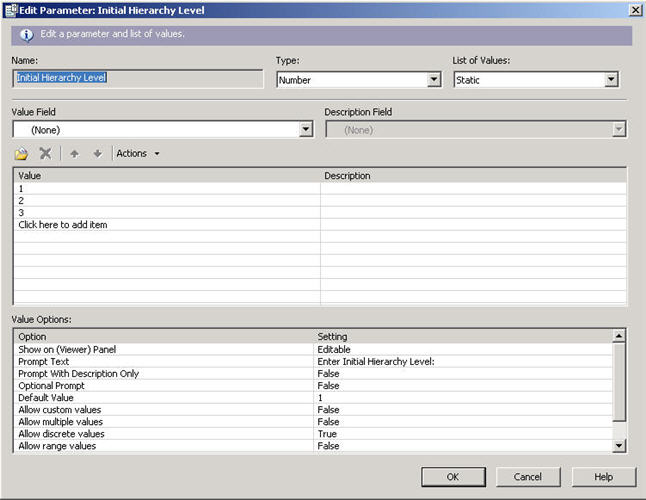 In the next step I create a new formula calledHierarchyLevel with the following syntax:

The part “{0D_DX_C01_BUSINESSOBJECTS_QRY_VAR_HRY.[0D_CUSTOMER]-NodeId}  ”  in the syntax is the Node ID of the characteristic of your hierarchy – so the syntax might be different in your case based on the BW query you created. This formula will return the level of the item in the hierarchy.

The second formula that I create is called “Drill” and only contains one line :

Here the details to the function DrillDownGroupLevel:

The next formula that I create is called GroupNumber and contains as well only one line:

The formula will return the GroupNumber of our report and I will show how we will use that information.

On the formula GroupNumber there is one important behavior that you need to recognize.

The formula is creating a variable and stores the hierarchy level from the Group where GroupNumber=1 in the variable. So now we can use this logic and use the formula in the condition for the suppression of our Group Header. 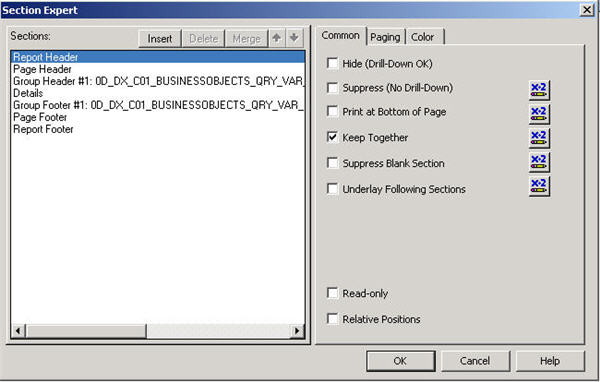 Click on the symbol next to the option “Suppress (No Drill-Down) and enter the following formula:

Drill is the formula we created to show if a drill down was performed.

HierarchyLevel is the formula showing the hierarchy level

Initial Hierarchy Level is the parameter we created to ask for the initial drill down level.

So the formula is checking in the first part if no drill was done (Drill=0) and sets the suppression level to any level higher than the selected level via the parameter (HierarchyLevel>Initial Hierarchy Level).

In the second part the formulachecks if a drill down was performed and the sets the Hierarchy level to any level higher than our formula Suppress Level we created previously.

Now your report should behave as follows:

This is excellent Blog but just for your FYI, it is not posted in 'Business Objects' area. Currently it is posted only in areas 'BI Accelerator', 'Business Intelligence (BI)', 'SAP NetWeaver Platform'.

Once again thanks for such nice blogs.

What if I want to open just one subtree of the hierarchy and let the others closed. I will need more parameters, don't I?

drill down directly on the page is not possible.

on the "one subtree" - could you be  a little bit more specific and perhaps provide an example based on the items mentioned in the blog ?

thank you for the really good and again useful blog!!!

Concerning this theme we need to know, how BW hierarchies can be displayed in reverse
presentation (Position of lower level entries Up)

This kind of presentation is often needed within standard reports (f.e. balance sheets, DB II,
et cetera). Thats why I think this question could be of general interest.

I have a P&L query in BEX with one structure and a profit center hierarchy in the rows. There are some key figures in the columns also.

How can I combine this structure and this hierarchy in Crystal Reports?

Former Member
April 7, 2011 at 7:33 pm
Hi. Ingo
first let me thank you for this blog. This blog is quite informational and sorted out many of my issues.

But just wanted to know is it possible to carry the headings of main report to the drill-down levels also, if yes how to we do that.
Thanks&Regards
Neeraj

Can we have similar to this in the new version of Cyrstal Report Enterprise 4.?

i like to do the same in some of my reports

this one helped me a lot today!