Over the past years, the integration of Wireless Sensors Networks (WSN) into Business Applications attracted a lot of researchers. Wireless Sensor Networks are composed of sensor nodes capable of measuring the physical world. Those nodes can sense a large diversity of physical information such as light or temperature in a room. With their ability to control and monitor physical environment, WSNs raise the interest of different business domains, ranging from defense, public security [2], manufacturing and traffic control to health care.

In order to demonstrate the feasibility of integrating sensor nodes with SAP technology, SAP Research SRC Sophia Antipolis in France stepped up to build a demo dashboard based on SAP technologies (Event Driven Business Intelligence [3] from BusinessObjects innovation center, and SAP BusinessObjects Xcelsius Enterprise® software [4]) that integrates IP-based sensor nodes across all types of global physical networks, including IPv6 and IPv4.
This prototype has been demonstrated at the Interop 2009 in Las Vegas at the IPSO [5] booth. 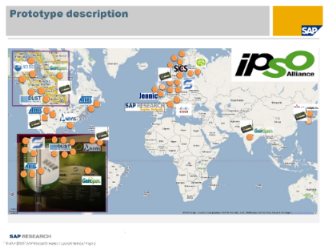 The Internet Protocol for Smart Objects (IPSO) Alliance, is an organization of leading networking technology vendors and users. IPSO aims at supporting flexibility, scalability and low power operation of IP-based smart object networking solutions – all available today. By using Internet Protocol, devices from multiple companies, and using different physical communication links, can easily interoperate without the need for complex gateways and other redundant infrastructure.  Intended to complement the efforts of entities such as the Internet Engineering Task Force (IETF) and the Institute of Electrical and Electronics Engineers (IEEE), which develop and ratify technical standards in the Internet community, the IPSO Alliance performs interoperability tests, documents the use of new IP-based technologies, conducts marketing activities and serves as an information repository for users seeking to understand the role of IP in networks of physical objects. 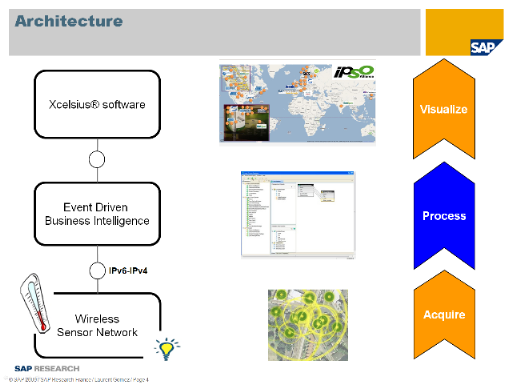