A quick search on SDN for the word “flowerpot” and “DBM” revealed little information of initial relevance. I have not gone mad and we are not talking botany or database management but are talking about aspects of the dealer business management component of the ECC Automotive industry solution. Like many industry solutions, this is fertile ground for developers with many enhancements often being required. This is an attempt to provide a starting point and a cross technical-functional perspective of how you can enhance the order engine (OE), core component of the DBM 6.0 solution.

DBM is part of IS-AUTO however in practical terms it is the SAP ERP industry solution for all things related to the retailing of vehicles. All aspects of a vehicle – the manufacturer, model are created as master data in the system and vehicles can be traded accordingly using solution specific aspects of the standard logistics solution (sales order, purchase requisition, purchase order, goods receipt and billing). The two transactions which form the mainstay to functionality can be enhanced using the action concept.

Order actions are delivered as standard business functionality but new actions and modification to existing actions can be achieved – some examples of which an implementation developers might be involved in:

It should be noted that whilst the order and the vehicle both use a concept of actions, the two are each quite different from one another. This document will just discuss order actions and the information is only relevant to order engine actions.

Within the DBM order an action is defined as a self-contained business transaction. Unlike the VMS action concept, DBM order actions are linked to one or more events. Events form part of a core framework called the order engine which drives processing of the DBM order. This is defined in the customising:

The event, akin to a “process controller” to execute one or more business transactions (actions): 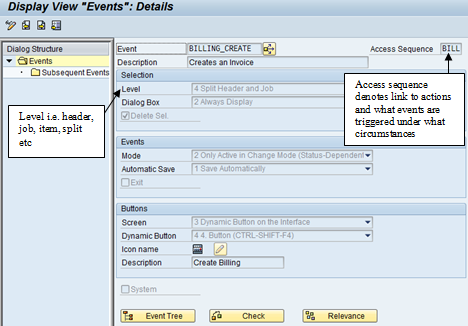 The action should represent a self contained business transaction: 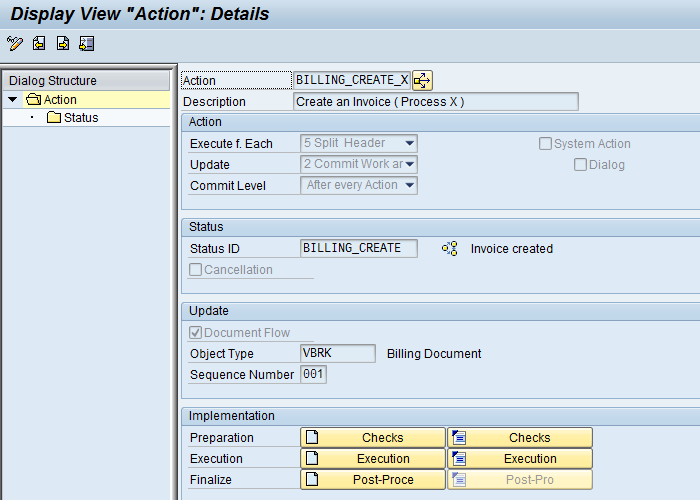 Unlike in the case of the vehicle master, an iOBJECT is not used to store data. Data is stored in transparent tables that are akin to the traditional SD DDIC design. The tables are within the /DBM/ namespace and include /DBM/VBAK_DB (order header) and /DBM/VBAP (order item).

SAP produce a very useful cookbook which can help guide enhancements to the order engine. The latest version can be found under note 1105899:

There are a number of enhancement spots available throughout the DBM order transaction – search from transaction SE18 using the prefix /DBM/ORDER* for a full list and the corresponding BAdI’s.

From an order action perspective three of the main BAdI’s can be found within the action customising:

The 3 levels of implementation form the core of the DBM order engine. The order engine is a central framework around which the DBM order transaction UI has been built. See function module /DBM/OE_MAIN_CONTROL or crucially static method /DBM/CL_ORDER_ENGINE=>RUN(). The event is executed from within this method (see method PROCESS_EVENT) and thereafter the action(s) (method PROCESS_ACTIONS). You can use checkpoint group /DBM/OE_ACTION to debug the order engine ahead of actions being processed.

Although BAdI’s can be placed in any action you are advised to steer clear of any actions where the “system action” flag is checked in the configuration. These actions are core to the standard working and processing of the DBM order and although can be enhanced should be treated with further respect.

TIP: standard implementations e.g. see enhancement implementation /DBM/ORDER_ACTIONS_IMP are not shown by default in the order action customising however these can be shown by typing =SAP in the transaction code box when viewing action configuration detail.

There are many attributes to the /DBM/CL_ORDER class however data is split in three principal areas with following prefixes:

Everything to do with the order is stored within this class including:

A new item level Z event and action called ZSTORAGE_LOC_CHA have been created in the configuration and linked together:

The standard criteria table /DBM/OE_EVAC_DEF is used to define a new custom event and action. Within the action ZSTORAGE_LOC_CHA, click on the execution button to see the BadI that will be executed when the event and action are executed:

Within the respective method you may see the “raw” code or a public/static method call to pass a function module name. The interfaces for preparation, execution and finalize BadI’s are each slightly different – I have created class ZCL_ASG_DBM_ORDER_UTILITY which has static methods to cover all 3 scenarios:

TIP: create a generic bespoke class, in this case ZCL_ASG_DBM_ORDER_UTILITY with 3 static methods to handle your new action functionality whether it is preparation, execution or finalize implementations. Copy the standard code from the respective standard class/methods into your static methods e.g. class /DBM/CL_ORD_AX_ACFMOD / method CALL_ACTION_FM for the execution implementation. The advantage of using this approach is:

In our example the code in the BAdI is:

The code to do this in the function module:

CHECK LV_LGORT IS NOT INITIAL.

Other Sources of Information

Although DBM is very much a niche solution there does exist some sources of other information. In addition to the vehicle and order cookbooks you should consult:

The Automotive forum on SDN

We have barely scratched the surface from an enhancement perspective and what can be achieved – whilst the vehicle master offers significant opportunities, the DBM order engine offers a developer even further opportunities and challenges for development. The order engine framework is an ideal mechanism for developing enhancements and you can re-use many of the standard methods within the flowerpot – class /DBM/CL_ORDER.

…a word of caution however – whilst the scope of this should excite you it can also be the cause of its own downfall. It is possible to trigger actions which result in the abrupt termination of the order engine in certain circumstances which can be extremely hard to scrutinize. I have heard examples of the order transaction being “down for days” in extreme cases where a rogue action has done something but nobody can work out where the actual rogue code is. In the order engine you have immense power and control to enhance, however just be respectful of that!

It should also be pointed out that although you can use any of the standard methods and concepts described in this document you should understand that you do so at your own risk. Methods such as ITEM_CHANGE are not released APIs and as with all standard code subsequent changes to them can occur in later versions without notice or warning. From a technical perspective this can mean something working one day and not the next – even with this in mind however many meaningful and significant enhancements can still be achieved.

Former Member
November 26, 2009 at 8:36 am
Thank you for focusing on the DBM Order engine in such a detail. I need your help regarding the appointment sheduling. I did all HR, MRS and WFM configuration but still not able to fine reason why i get error 1. service advisor is not relevant. 2. I do not get appointment sheduling button on the screen.

I dealt with scheduling on the same DBM project as David. We actually ended up using our own bespoke scheduling solution, so I can only give my best guess as to what might be causing your problems. I think you are going to need to do some debugging!
#1 Perhaps somewhere in master data you can specify the possible list of service advisors from the org structure, and you've tried to use someone else?
#2 We encountered a similar problem to this. In our case it seemed to be down to the task data on the order. It looks like tasks were largely designed to drive scheduling, and so if you don't have a valid task, then it doesn't think you need to schedule anything. We're not actually using tasks, but we create dummy ones to keep the standard button on the screen.

I hope that's of some help.

Problem 1:  I found that availability data for employee in HR is not transferred  incorrectly to WFM by report   “/MRSS/HCM_RPTWFMIF “  I don’t  know why  it is transferring availability data with very old dates ( e.g 1970 ) So I made manual changes. And it is ok for time bing.

Problem 2: for “Appointment Scheduling” button not visible in service advisor.

As per SAP     - If the Event can be executed (at least one action assigned to this event can be executed) the button is shown. I made all check and found I have made the action entry for corresponding access sequence in table.  Can you tell what is the exact customizing for this  ( Event , Stats ID, Action Control Matrix, and Action etc.) .  As you suggested that can you please what is exact way to maintain dummy task.

If you want any information please mail me at below email
1.     Ganesh_Sawant@satyam.com
2.     GSAWANT@NISSAN-EUROPE.COM