With help from SAP (more on that later), one of our Solution Manager systems was patched to Enhancement Package 1 [EP1] while I was out of the office in June. As far as I knew, it went pretty well, with new features activated including root cause analysis, intended to assist us in tuning our BW 7 upgrade that exposes a whole new universe of Java performance risks.

I’ll detail version specifics later, but first, one of my old-school rules is to look at the semi-automatic Early Watch report(s) to find any burning issues, or just smoldering ones, that need a closer look.  The chart below should overview what Solution Manager is analyzing in our landscape.  It shows 2 systems are up so far with RCA (root cause analysis) and/or there are 10 systems considered production.  I didn’t think we had that many, or maybe they grew when I wasn’t looking. To let this image fit in the blog size limits, I shrunk a couple empty parts, including System Monitoring, Business Process Monitoring and Open Tasks.  Perhaps they should not be empty, but that’s where we are today. Looking at several of the reports generated after EP1 went in, I saw nothing new, yet a couple old charts had altered.  I was expecting, but only half hoping, to get a new and revised Early Watch report that deleted useless trending, let me drill into good data, and drew conclusions I could agree with.  Telling us to upgrade R/3 is nice to know, but hardly revolutionary.

We have “old” plug-ins now.  The EW report says we need to get to the December 2008 version.  Of course, I should have expected that an upgrade to one system would trickle down to being required to patch the rest of the world.  In addition to the plug-ins, I would not be surprised if the CCMS agents we have running, and the SAP OS collector, also need work.  It’s like going in for an oil change and finding out your radiator is leaking.

Looking at the analysis of user activity: BW looked different than the R/3 systems.

I’ve shrunk these charts to pare down non-essential data; look at the last third of each picture.  Somehow, EW believes our BW active users reached a historic plateau, just after the Solution Manager upgrade.  I don’t think so.  What happened, I don’t know yet, but now I need to find out (“not in the plan”). 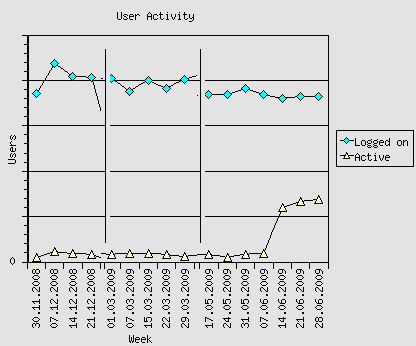 While this is not a critical metric (we’re more concerned about query times and loading times), the fact that this chart also behaved in a different manner after the EP1 patch means I need to find out why.  The R/3 and SCM systems did not act this way, which is another puzzle clue.  My next step will be to look at the underlying ST03 data to try to understand whether the past or the present has the right values. 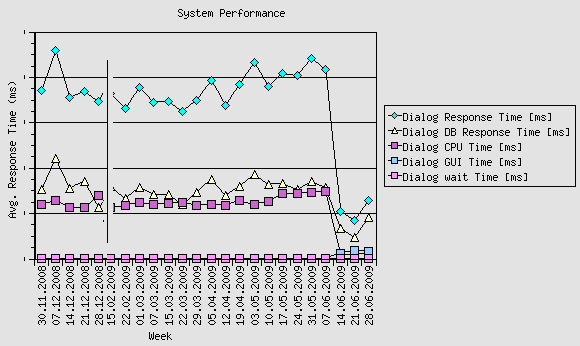 Lastly, all of our systems exhibit the same behavior for the hardware capacity chart.  They have flat-lined, which must be a problem with Solution Manager, because I think someone would have mentioned if all of our production systems had been at 0% CPU for 3 weeks while I was out of the office.  I’ve opened an internal ticket on this issue, and found several SAP notes that may apply. 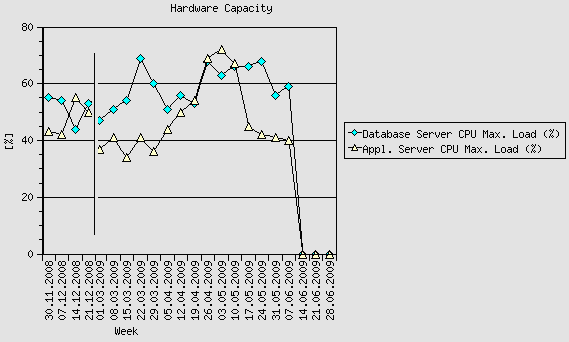 Maybe next week.  As of now, I’m regression testing.

Fixes for the lost hardware scans: 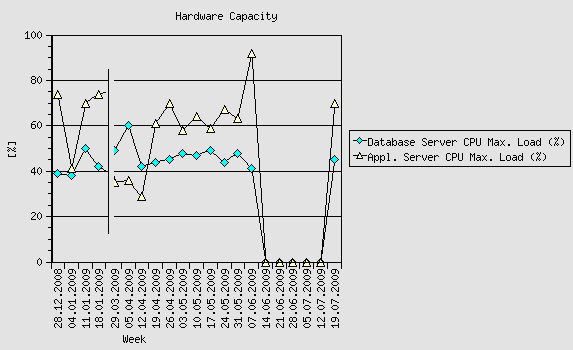