A Brief History of CRM in China

As we all know, the concept of CRM was introduced in the early 1990’s and popularized in north America and Europe afterward. In this blog entry, I will show you the fast but winding development of CRM in China ten years later.

Call Center, based on CTI and IP technology, emerged in China and was highly developed, with an annual growth rate of 50%. Call center and CRM are two different concepts in Western countries. In China, however, the development of Call Center is a concept directly related to CRM.

CRM vendors introduced the CRM concept to Chinese entrepreneurs by means of summits, forums and seminars.

Besides SAP, Siebel, and Oracle, the first local CRM vendors, such as MyCRM and TurboCRM, were also eager to compete for some of the CRM market share.

In 2000, the majority in China considered CRM to be a software solution related primarily to sales issues, or as cutting-edge call-center technology geared to improving customer service and customer satisfaction. Others simply believed it was a luxury purchase for big, wealthy companies. All these misconceptions indicated that the Chinese CRM market might not grow smoothly.

The Chinese CRM market boomed in 2001, with sales revenue of $7.5 million (source from IDC).

Although CRM products were mostly implemented in Finance, Telecommunications, and IT, at the end of 2003 CRM products covered almost all industries (Figure 1). The IDC reported that the whole CRM market reached as much as $25.80 million. Even the Automotive and Medical industries set up sales force automation (SFA) systems and call centers. More and more cases of successful implementations attracted the rest of the wait-and-see customers.

However growing pains could not be avoided. The discrepancy between the customer and vendor’s understanding of CRM, confusion regarding objectives of CRM, the lack of professional consultancy, services, and industry specific solutions resulted in many project failures. The CFOs found that they were over spending on their CRM projects; the systems did not bring the CEO huge profits as expected, and their sales employees refused to use the systems.

Customers started considering practical requirements: How can I integrate my CRM into my other back end systems? What are the specific requirements in our industry? And how can I manage my sales processes so that I can gain insight into all sales processes in all locations? These questions lead the CRM marketplace in a healthier direction: their call centers were transformed from cost centers into profit centers. 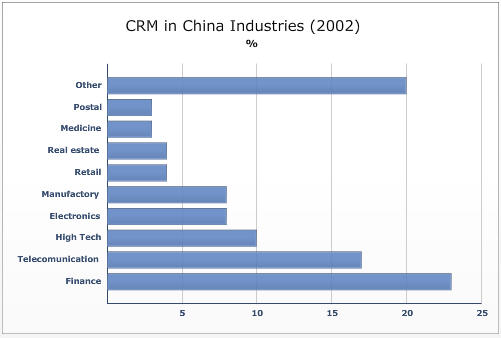 This year clearly demonstrated that vendors come and go, as the so called “CRM Winter” came to China. Microsoft entered the Chinese CRM market in July of 2004. In October, the No. 1 local CRM vendor declared bankruptcy and its product MyCRM was sold to another local company. This news shocked investors and froze Chinese investment in CRM. A couple of months later, Oracle’s acquisition of PeopleSoft, which had not been fully developed its CRM business in China, further shook investor confidence in the solution as a concept.

Fortunately, more CRM players joined the game in 2004. CRM education organizations and independent consulting companies appeared in the CRM business chain. In parallel, the CRM media began shifting from articles about the basics of CRM to in-depth case studies and implementation analyses. CRM kept growing fast in Telecommunications, Finance, Insurance, High Tech, Consumer Package Goods (CPG), and Manufacturing. Continuous call center development in some industries also pushed the implementation of CRM. Because companies had already acquired a great deal of customer information, they needed a solution to leverage this asset across all departments.

Customers became more mature and reasonable. Instead of going to CRM vendors directly, they began by first inviting consulting companies to clarify their requirements, then compare and select the appropriate vendor. At last, they developed implementation plans to ensure the project success. The overall sales revenue in 2005 increased to $54 million (source from China Center for Information Industry Development).

The Chinese CRM business chain became more complete with the emergence of CRM education, system suppliers, implementation consulting, professional sales agents, and partners. This was a landmark for the Chinese CRM market.

In 2007 overall CRM revenue reached around $60 million (source from Allpku Consulting). It is worth noting that 45.6% revenue came from large enterprises. Interestingly, 24.7% enterprises developed their own CRM application. 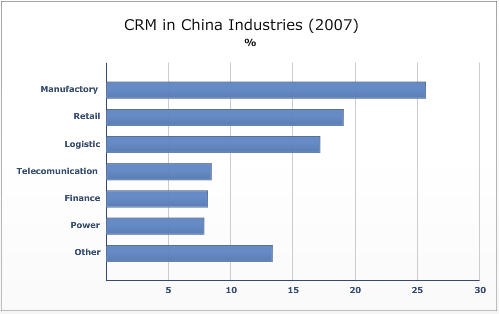 The key phrase in 2008 was “economic downturn”, during a time when Manufacturing was the top CRM implementation industry in China (Figure 2). Retail began to rethink how to do business with their customers. This illustrated that China’s enterprises were moving away from a product centric perspective to a customer centric focus and was starting to focus more on service.

The Chinese CRM market still needs time to become mature, and both vendors and enterprises, and even other players in the chain have to invest more in the market. However the CRM demand in China is always there and continues to grow. (Figure 3). 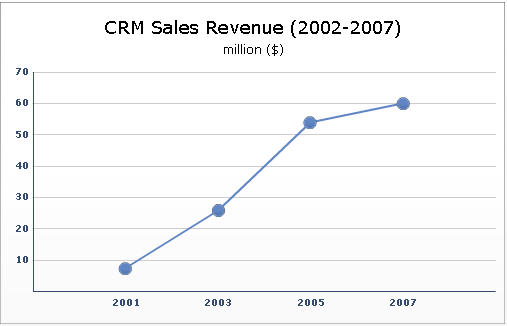 We can see from the line chart above that Chinese CRM market keeps rapidly growing since 2001. But did you notice that the world economic slowed down in 2001 due to internet bubble?

How does the economic crisis, started in 2008, impact Chinese CRM market? I will discuss this in my next blog entry, part 2 of this multi-part series on CRM in ChiI na.