Where to start?  Well that’s what I’ve been thinking for a while.  Where should I start with a blog on the shipment and delivery interfaces using ABAP Proxy.  It’s a long story.  We had many decisions to make prior to even starting to write the code.

So I think I’ll start at the beginning.  Before I start, like any good story teller,  I need to go over some of the acronyms I am using.

Once upon a time, not so long ago, and not so far away,  in a company that made over-the-counter pharmaceuticals (I just said that part very fast),  there was a problem.  The carriages were making stops to many different castles with deliveries but not always in an optimized way.  The horses were wearing out their shoes.  So it was decided to use a product to optimize the coach’s stops, and give our tired horses a break.  Our SAP shipment process had to integrate with an outside system.  The project required the ability to send deliveries and customer master records to the outside system.   The outside system would send the shipments and the “Websettle”.  Websettle feed our A/P and G/L documents.   It seemed pretty straight forward at the first glance.  Our daring team of wizards and one court jester, that’s me, believed we were up to the challenge.

It was not as easy as it sounded.  Dum Dum DUM!  (That’s the scary sound effects)

There were some requirements that made the project more of a challenge.  We needed an immediate response.  Our carriages would be waiting for the shipments.  The outside system could not optimize without the deliveries.  We needed a way to keep track of the information we sent to the outside system.

We gathered our requirements.  Then we had some technical decisions to make based on our need for fast communication with high volumes.  The two different ideas that we had are below. 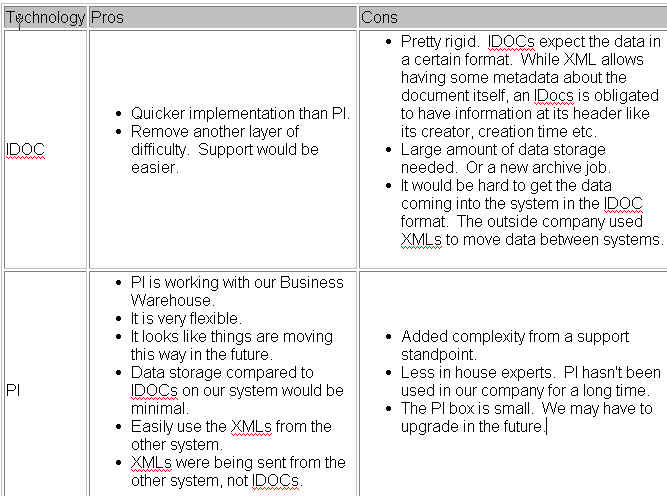 So the king, his wizards, and one the court jester made the decision to go with PI.  For this kingdom it made a lot of sense.  However, that doesn’t mean that it would work for EVERY kingdom.

Our next decision was how we would integrate ECC using PI: 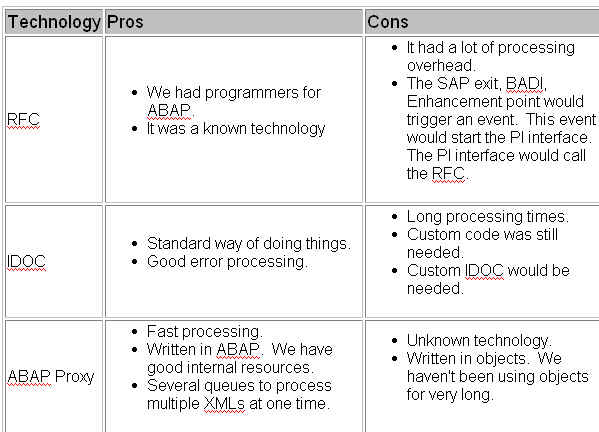 So after a long debate, we decided to use ABAP proxy.  This decision was not a clear path.  It was hard to decide between RFC and Proxy.

After making some of the initial decisions, it was time to create the interface.  I researched XI in the “great library of wise men and women”, or SDN as you would call it.  I read a lot of blogs and help documents.  With the help of a colleague, I was able to create my own data mappings and configuration on PI.

There are many excellent WIKI and Blogs to look at for information about PI.  I’ve listed my favorites below:

Then the hard part started.  We did not have any experience with ABAP proxy.  So it was back to SDN.   There were great blogs and wikis for PI, but there wasn’t any one place to go that explained the Proxy.   There were some code snippets and there were some guidelines.

I added a web page to try to keep everything together for ABAP proxy.  That page contains a lot of the links that I found useful.   I’m trying to add more information to the page, and set up some links to it.  However, lately the king and the kingdom have demanded my attention.   They have these expectations that I will actually work.  So I, of course, have to work.

Well for a person who had no PI experience in January to now, it’s been a short time with a lot of information crammed into it.   ABAP proxies are really very easy to work with.  It just takes a little time to learn.   Take it from me, the court jester.  Now I’d feel comfortable suggesting using proxy data.

I’m planning on setting up a web page for my struggles with creating, changing, and deleting shipments.   Sending data out of the system via proxies is very easy.  Hopefully it will save you some time.  Our system is up and running.  There have been some issues but for the most part it has been stable.

And they all lived happily ever after…   The un-end.  We will be sure to change systems again.