SAP NetWeaver 7.01 SR1 SP3 ABAP Trial Version is the last incarnation of “minisap”/ NSP, can be found on the SDN downloads section, in the main releases section.

Most of the information below is already available on SDN or the internet, but I only found it spread among several pages.

It’s the complete name of the machine on the internet, like mypc.mycompany.com . Asking it at installation time makes perfect sense for real web servers, a little less for our standalone PCs; anyway what I found annoying is that it chokes if the DNS records (even the reverse ones!) are not setup correctly.

We can skip this setting, but to have a working webdynpro setup we’ll need to tune our settings as shown below.

The installer also asks if we want to install an SSL library, which we can safely ignore for our development purposes

After a lengthy system analysis,  the installer chokes again on my OS version, reported as a 5.1 release, while a 5.2 is required.

The insteller is right identyfying my system as 5.1 (is an XP pro), but according to the documentation it should be ok.5.2 is for XP64 and 2003 server.

Anyway, after hitting cancel the installation ran smoothly.Well,perhaps ran is not the right word: it took several hours!

This is the second time I install this release: No mater how hard I tried, I wasn’t able to get a working 3 months license like I used to do with older releases of minisap: everytime SAP sends me a key with the wrong system number.I’ve seen many posts on this issue, but none with a solution.

As Kumar Prashan and Volker Goerickwrote noted below, the solution is simple: just edit the NSP.TXT file you got from SAP and overwrite the system number with the one you find in SLICENSE.Thank you guys.

Getting webdynpro up and running

1)ensure we have a working FQDN

In a Sap system the FQDN can come from several sources:

After a fresh installation of this release (if we skipped the DQDN question) the third one will be active.

For our purposes, we don’t need DNS records, but the FQDN has to follow some naming conventions. Basically, it has to be either something like host.domain.tld (i.e. mypc.mycompany.com) or something containing localhost. Something different will trigger exception CX_FQDN.More details on the naming conventions can be found on the help entry linked above.

If our system is on a domain, the FQDN should work out of the box. If that’s not the case we can either set one of the above parameters (I think this requires setting a system profile with RZ10) or tune our OS setting.I din’t touch RZ10 for a while, so I’ll only cover the OS setting path.

so you’ll be able to tune the hostname through the windows control panel (the screenshots are in Italian but undersrandable): 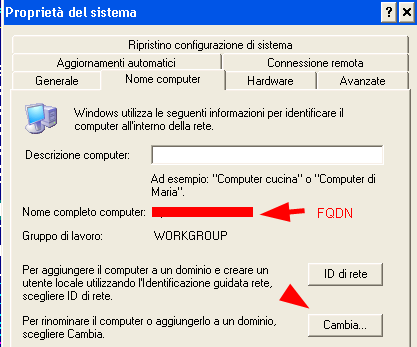 As you can see I’m using a workgroup.Hitting the change (cambia) button I get to the following screen: Hit “Other…” (Altro…) and you get to the last screen, where you can finally enter your domain suffix.You can safely enter some random one. 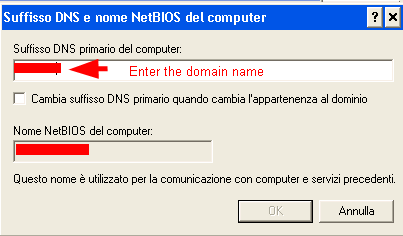 Once we set the FQDN this way the system should work fine locally, at least when connected to a network.

If something goes wrong with DNS resolution, or we want to use another PC as a client, we’ll have to add a line to file C:WINDOWSsystem32driversetchosts :

To make it work without any network, we’ll have to install a loopback device with a fixed IP number.

To make webdynpro applications usable and the graphical editor working, we have to start the following services from transaction SICF:

To do so, run transaction SICF, press F8 and navigate the tree to the required node; use the right mouse button and choose “Activate Service”, you’ll see something like this:

Then choose the single or multiple confirmation.

Sap library has more details on the required services.

Webdynpro applications use quite a bit of support classes, so with our slow PCs acting as server, we’ll get several timeouts the first time we use some WDA application (or even some new component ).I think this can be avoided precompiling everything with transaction SGEN (thamks to Durairaj Athavan Raja for pointing this out), but I’m not sure it’s a good idea to go too far precompiling stuff in our tight memory environment.When using already compiled code the application get quite responsive.

Prashant also pointed me to Part 1 – Netweaver 7.01 ABAP Trial Tips weblog by David Bann that covers some performance tuning tips (including SGEN), as well as instructions on creating other clients and disable FQDN checks.Check it out :).