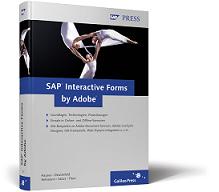 Key experts and architects from Adobe and SAP teamed up and shared their knowledge in a 600+ pages book. It’s a hands-on book. You will be guided through samples step by step. Also, it is described how to set up a SAP NetWeaver 7.0 trial on your own computer and use it for the samples (except for the ISR examples). To get the most out of this book you should be familiar with ABAP programming.

Here are the links to SAP Press pages for the book.

Here’s the link to the English book:
http://www.sap-press.com/product.cfm?product=H3026

Chapter 3, “Installation and Configuration,” describes how you can download and install the software to work with SAP Interactive Forms by Adobe. It also details the configuration of the software components. This chapter guides you through the individual steps and indicates possible problems and their solution.

Chapter 4, “Interface and Form Context,” introduces the print form topic. It uses an example to explain the corresponding procedure, which you can reproduce in your system. You get to know the Transaction SFP, important concepts, and the relationship between interfaces, form context, and form design.

In Chapter 5, “Creating Form Templates,” you begin using Adobe LiveCycle Designer 8.0 to design the layout of print forms. Based on the interface and the context of the previous chapter, this chapter provides step-by-step instructions on how to use Adobe LiveCycle Designer and helps you understand the underlying technology. In this context, it considers critical topics, such as the process of structuring forms by means of subforms and data binding of form fields.

Chapter 6, “Form Output,” introduces you to the development of print programs. Print programs generate the print output using the interfaces and context that were created in Chapter 4 and the form template that was developed in Chapter 5. This chapter requires some ABAP skills.

Now, that you are familiar with designing PDF forms, Chapter 7, “Advanced Form Template Creation,” covers more complex topics, such as output formatting, pagination, and script programming (JavaScript). It also explains the usage of tables in forms and discusses the creation of interactive PDF forms in preparation for the following chapters.

Chapter 9, “Internal Service Requests (ISR),” introduces the ISR framework whose technology is based on Web Dynpro. It describes the usage of this framework within the SAP infrastructure and creates a simple example. In the next step, customizing and programming of complex scenarios are explained. This chapter concludes with links to additional technical documentation.

In Chapter 10, “ABAP PDF Object,” we leave the framework world and introduce you to a deeper level of ABAP programming. This chapter also uses programming examples to show how you can use the functions for PDF forms through the PDF object in ABAP. Among other things, it focuses on the implementation of offline scenarios.

Chapter 11, “Offline Scenarios via Web Services,” demonstrates an alternative method for integrating PDF forms with an SAP system via Web services, which can be used to implement offline scenarios. It discusses the two possible approaches to using Web services: The first approach is directly supported by Adobe LiveCycle Designer; the second approach uses the Simple Object Access Protocol (SOAP) object in JavaScript.

Christopher Solomon
May 11, 2009 at 9:59 am
This looks interesting. I think it will serve as a good overview and reference for many people. However, it seems the brunt of questions that come up are more related to specific scripting scenarios/needs....which reminds me....perhaps I missed it, but I didn't see much mention of scripting (Javascript or FormCalc) in the chapter summaries there. Maybe that's another book! haha Thanks again for the info.