Tasting the mix of Blue Ruby

Have you ever heard of Blue Ruby? No? Well…simply put, Blue Ruby let’s you run the Ruby Programming Language inside an NetWeaver ABAP Stack…good enough? It is for me of course -:)

Those who know me…virtually or personally, already know that I’m very passionate about Technologies and specially, Scripting Languages.

This week, thanks to Juergen Schmerder and The Blue Ruby Team, I  got early access to the WebGui based Blue Ruby IDE.

Of course, the first thing I did was log-in and tried to do some testing…mostly language related testing. Gladly I found that almost everything I could do on Ruby (Core Language) could be done on Blue Ruby.

So, next thing I do was to start working on my always to be example…an SE16 Emulator.

It was fairly easy because I have done a lot of SE16 example using Ruby, Camping, WxRuby, Sinatra, PHP, PHP/Flex.

Anyway…here’s the code. Just to let you know…there’s a way to make much smaller…almost 6 lines long…but I decided to go with the longer version for two simple reasons.

1.- I wanted to keep testing the language capabilities.

2.- Wanted to separate each field and format them invidually.

3.- Wanted to have fun by writing more code -:P 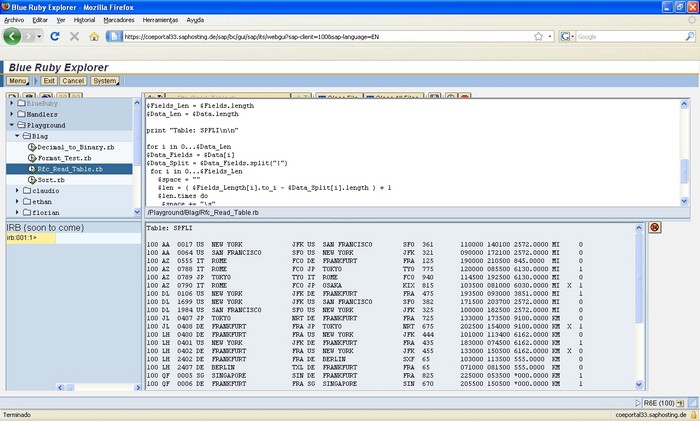 I’m sure you’re going to get amazed with this -:) I’m still amazed myself -:D

So…if you want to learn more about, here are some useful links:

Blue Ruby Demo Video Part 1: How to get started