Business Objects’s semantic layer can expose cubes as OLAP universes to client tools like WebIntelligence (or WebI for short). This applies to OLAP servers like Microsoft’s Analysis Services or Hyperion’s Essbase but also to SAP BW. There is a component called OLAP Data Access (ODA) that retrieves data via MDX – a query language for multi-dimensional data sources. In the case of BW, the ODA component connects to SAP Business Warehouse – OLAP BAPIs (BW-OBI). This connection has now been optimized and streamlined in order to improve the interoperability. This blog gives some insight in what has been done and what the effects are. It complements Better Performance For Universe-Based Access To BW.

Figure 1 shows the improvements that have been implemented with BW 7.01 (aka NW BI 7.0 EhP1). On the left hand side, there is a new option based on the Data Federator and leading to relational universes. Further information can be found in SQL Access to BW via Data Federator. On the right hand side, the existing option based on the ODA connecting to the OLAP BAPI is shown. It has existed for many years and also for earlier releases of BW. However, with BW 7.01 the interoperability between ODA and the OLAP BAPI has been streamlined leading to better performance and less resource consumption – see the discussion on figure 3 below. Please note: for simplicity, non-universe based query access via BICS (for BEX or Pioneer), ODBO (e.g. Native Excel 2007 On Top Of Netweaver BI 7.0) or XML/A is not shown in figure 1. This does not indicate or imply that they will go away. 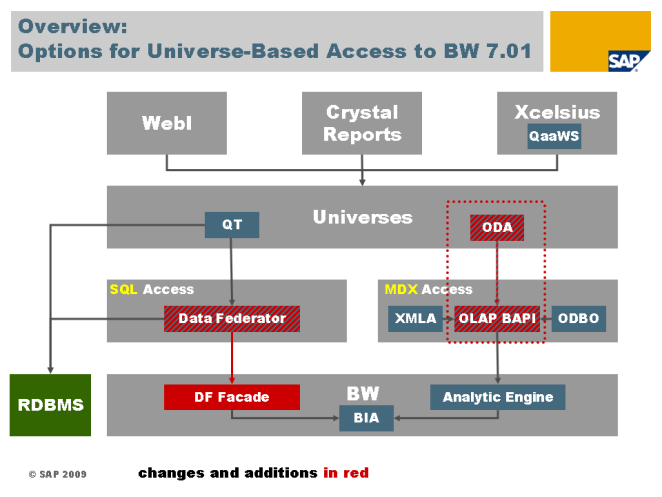 The interoperability has been improved in the following three areas, also visualized in figure 2:

In order to implement these changes w/o affecting the certified partner tools that are based on the OLAP BAPI – go here and search for BW-OBI certifications – a new, so called, rowset API has been created. This API is not part of the OLAP BAPI but is private and proprietary to ODA as it is tailored towards the ODA use case. 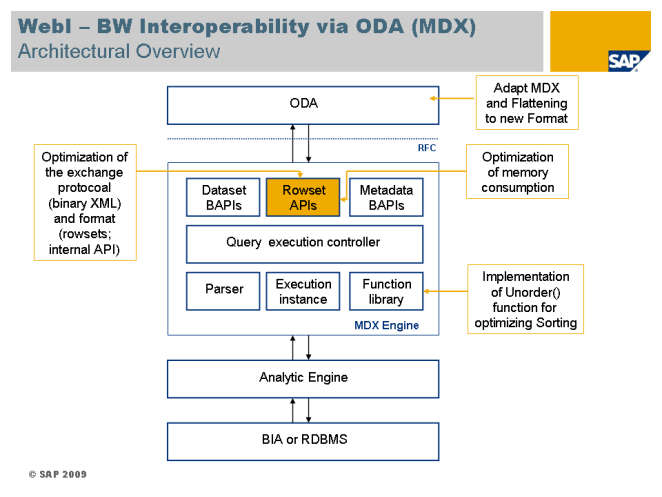 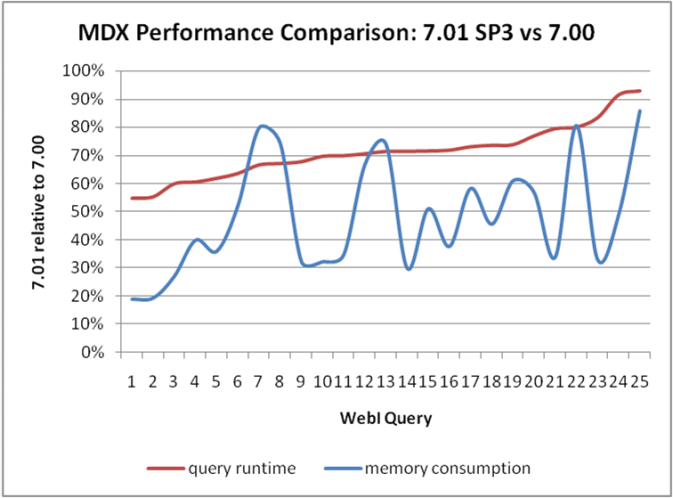 The technical prerequisites for leveraging the improvements are the following:

Can you please tell when EhP 1 (BW 7.01) is planned to be in General Availability?

Thank you for quick response. Unfortunately, link you attached shows "NO DATA" on the page 🙁 How to navigate to your link?

What are the corresponding fix packs for BOE 3.1. is LAFix rolled into Fix 1.3 (highest pack available today) or is the functionality available in baseline 3.1 (BO Enterprise)

Former Member
March 16, 2009 at 6:49 am
SAP Netweaver Version:
We are on SAP Netweaver 7.01 SPS2.  You mentioned this enhancement was available with SPS3.  Is there a set of SAP Notes that we could apply as advanced corrections to our SPS2 system to get the enhancements mentioned in this blog?

a LAFix is basically a pre-delivered fix on top of a FixPack. Think about it like a customer specific correction note.
With FixPack 1.3 you should be on the correct level on the BusinessObjects software.

Check out SAP Note 1293428 including the Release_Notes_ADAPT01085458.zip file, which is attached to it. The file provides the list of prerequisites on NW side.

Good stuff on performance. Now that the sorting of MDX results can be suppressed, it would be great if QaaWS could be changed now to be able to sort results from an OLAP source?  This would be a big help for dashboard design.

I have to scroll back and forth to read this blog.

Former Member
July 22, 2009 at 6:14 am
I've implemented the integration Kit and an OLAP universe query based and it runs.
I've a problem on a report that runs via Rich Client and fails via web client.
We are on BI 7.0 sp 19. Is it necessary to upgrade to BI 7.01 SP03 or SP04 ? We've seen your interesting document about the improvement of perfomance of BI 7.01 SP04 but we'd like to upgrade our BI system 7.0 in 2 months and not now.

may I suggest that you enter the issue into the forums and I am sure people will provide some help to your issue.