Years ago (okay, decades) when I was in high school I heard about this new technology called the ArpaNet; we had a teletype machine hooked up to other school campuses.  A classmate told me about FTP — “file transfer protocol” — with a gleam in his eye.  What was a file, and what would you transfer it for?  I was not quite sure at the time. Here was technology that practically no one knew anything about; it wasn’t long before I learned about helpful tips such as “The Hitchhikers Guide To The Internet.” Fellow students would ask me for help with programming, for I knew how to translate formulas (look up FOR-TRAN).

A year later, in college, I met many electrical engineers (who seemed to know more about the insides of computers than anyone else at the time) who tossed around a baffling mixture of English and gibberish: “Tee-Ko”, “Riss-Tiss”, “Eee-Macs”, “Pee-Dee-Pee”, “You-Nicks” were just a few.  I pretended to be aloof from this insider knowledge training, studying my own interests, yet was fascinated by the mysteries of arcane phraseology.  What was “text editing” and why would one care?  Typewriters with white-out worked for me.

As I progressed through a career outside digital computers, the use of slang, jargon, or shorthand still fascinated me. On my first job, only a select few were allowed to touch the machines; the rest of us were distantly involved, given printouts and rarely asked for input. “Gicks” – the grant information and control system was the business process management used to record money, administrative actions and communicate to headquarters.  Like the fractured golden rule (those with the gold rule), the owners and operators of the machines had insider terms, like “updately”, meaning twice a week when batch files were sent up and down the chain, and in their spare time, they had access to the nascent computer gaming world, with the “Adventure” program capturing the flavor of the evolving Dungeons and Dragons genre.  More buzz words in that subculture that I care to remember.  Points, fame, arcane knowledge were key.

Somewhere along the way, I found the jargon file, or hacker’s dictionary, an online compendium of terminology going back to the “glory days” of MIT, Berkeley and similar computer revolution melting pots.  I threw a few terms I found there into the Geeks and Suits quiz at SAP TechEd ’07, and even Craig Cmehil probably learned about definitions hitherto obscure.

Though I’m an SAP Mentor, I am not as immersed in the online forums of SCN as other Mentors have been, primarily as the ASUG community I’ve been a member of for a decade has its own set of forums.  Thus, I’ve not seen the traffic growth, the points wars, the flame battles, nor other cultural developments that many, many have seen.

Mark Finnern started a new wiki page called the SCN Urban Dictionary only a few days ago; within hours new terms were added. Several dozen edits were quickly made.  Mark seeded one term which has blossomed into many more. The image below shows just part of the development of this fun, yet useful, wiki area.  I found it Friday night, then added my contribution.

Now I know what Marilyn Pratt meant when she said she would “do the needful to guestify” someone.

Is there a word or phrase people use in the SAP Community Network you have not heard or seen anywhere else (it would help if you spend time working outside SCN, of course)? If you can’t find it in a standard dictionary, or even an online slang reference site (like the urban dictionary, which defines guestified, by the way), look for it here.

Do you know how specific slang developed?  If so, add it to the wiki page, using these basic rules:

If you don’t find a definition, yet are unsure of the meaning, add the word(s) to the wiki page, along with a link to the context where it was used.  Chances are, someone has a clue.  Though, for “survivlance”, we’re still looking for our Dr. Johnson. 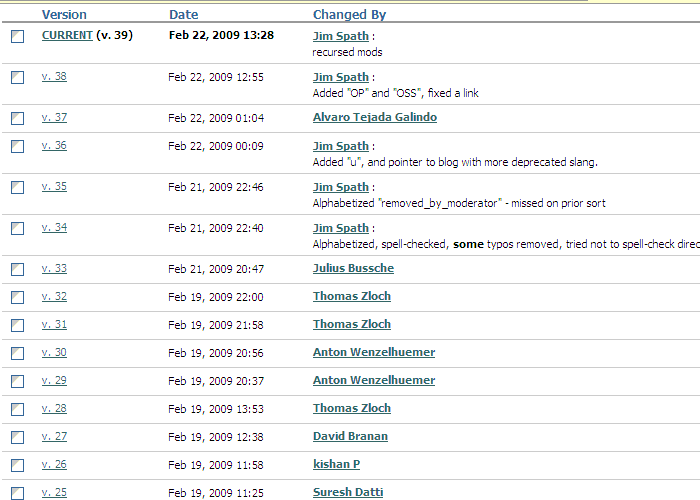