This is probably the highlight for a  lot of form developers. I had the request for this functionality many times. The  following screenshot shows what you get after you hit the button with the green  checkmark. The code line with the syntax error is highlighted and you get  feedback on what is wrong. In this example a semi-colon of a for-loop is  missing. The syntax of JavaScript and FormCalc can be  checked.

This option influences the  performance of JavaScript execution starting with Adobe Reader 8.1 by applying  strict scoping rules. Do not use this option if you are targeting an earlier  Adobe Reader version.

Designer now provides support for  developing a PDF form for a specific Adobe Reader version. This is for example  useful if you want to ensure that you are using only features that are also  available with Adobe Reader 7. You can specify on the Defaults tab in the Form  Properties dialog that the target version is, for example, “Acrobat or Adobe Reader 7.0.5  or later”. You will get a list of warnings as shown in the following screenshot  if you are using a feature that is not supported in Reader 7.0.5. In the  example, locking fields after signing the form is not support with Reader 7, you  need at least Reader 8.0.

Designer 8.1 consolidates all four  patterns in one single dialog to improve usability. You can specify different  patterns, i.e. display patterns and data patterns for print and interactive  scenarios in one location. Additionally, for interactive forms there are edit  patterns and validation patterns. Also, a  “well kept  secret “ that it is possible to handle empty (i.e. null values) and zero  values in picture clauses made it to the UI. 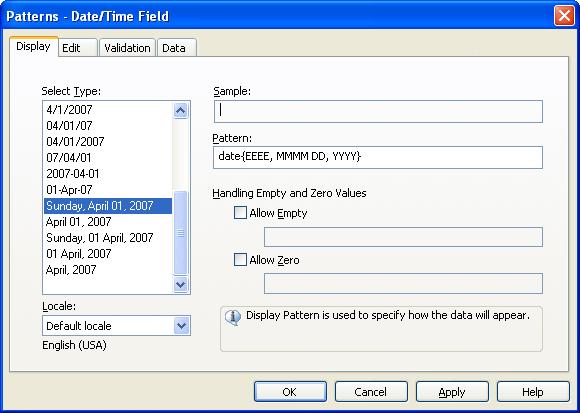 Form metadata entered on the Info  tab in the Form Properties dialog is now transferred to the PDF when rendered  with ADS.

Former Member
February 17, 2009 at 2:04 am
NICE BLOG.
and also am happy to know that these functionalities are there in the new versions...

Thanks and Regards
shanto aloor

The SAP Designer is distributed via SAP Service Marketplace or SAP Solution Manager. For SMP, you need an S-user to log on. In the donwlaod section search for "Adobe Designer".

I had the same problem und could now finally download it.

My problem was, that my s-user hadn't enough privileges to download software from the marketplace. You have to question the Marketplace-Administrator in your company in order to get this privilege.

The second point was Firefox. I couldn't download it with Firefox 3.5. Only with the Internet Explorer 6.0 or above it has functioned.

This is great news - the syntax checker is a HUGE win!

I only see version 8.0 available for download from the SAP service marketplace.  Am I missing something?

Can you confirm the location, please?

My S-User can see Designer 8.1 on SMP (I log on from Germany). I don't know the reason why you cant see it. I'll find someone from SAP to comment on this.

NW 7.01 is still in Ramp-Up. And your company does most likly not participate.

Former Member
March 4, 2009 at 10:30 am
And what about the case of dynamically added/deleted rows that do not reflected in WebDynpro context? Is this problem solved?

Maheshkumar gattu
March 4, 2009 at 9:02 pm
Hi Michael,
even i am also looking facing this issue, i have around 4 tables in pdf and need the dynamic rows functionality. right now i am taking the row count at webdynpro level and updating the table context(but this is not the idle soulution) if you come across with any inbuilt solution please let me know.

Former Member
Blog Post Author
March 6, 2009 at 2:18 am
I consulted experts and they told me that from your statement it is not clear what you want.

For example I was told that UPS (Unite Parcel Service) uses Maxicode and not Datamatrix. Support in Designer is just one thing. You would also have to talk about the actual output (like support in PS output).

If you want to you can send me your request directly.

Former Member
April 15, 2009 at 4:53 am
Additionally there are different types of support for barcodes in Adobe Designer: software rendered and hardware rendered.
Hardware-rendered barcodes (e.g. like Aztec) are available as objects in ALD 8.1 and can be inserted in form as placeholders with data link, but will only print on supporting printers (like Zebra) and will not print on common PCL or PS printers like HP.

Former Member
July 31, 2009 at 12:00 am
Finally ! Wow, the days of whoa ! what happened ! why isn't it working ! is almost over. Thank you for having syntax checking incorporated.

That would be Designer 8.1. You need to access it through the standard software delivery mechanism. We do not have trial versions the provided version can be used by SAP customers/partners.