A tiny get-together [updated: … may not be as satisfying as a full scale event]

In a prior blog post (“Doublespeak“) I talked about a planned charity event that SAP SCN community evangelist Craig Cmehil had planned starting Thursday February 12, 2009. I was pretty enthused about the event, set up a parallel though smaller-scale (1 hour out of 24) event with the Americas SAP Users Group (ASUG), and was working out the logistics of doing simultaneous feeds to and from different media through multiple continents when fate stepped in.  We had shirt text messages (okay, they were tweets; yes Marco Why twitter is not (yet?) all that valuable for BPXers ( and others)) around 2AM (my time) on Thursday February 6th that Craig was in the hospital with back problems.

The normally scheduled Friday Morning Report Craig has hosted for many months to an evolving group of social media misfits did not occur on February 7th.  We were crestfallen, yet optimistic, as Craig’s self-diagnosis was he’d be out “a couple of days.”  It’s human nature to be optimistic and, yes, sometimes laugh in the face of danger.  After those couple of days went by with no updates from Craig, we, his friends and colleagues, knew this was worse than expected.

My plan had been to run a webcast highlighting Craig’s charity drive for Doctors Without Borders, inviting my peers who are SAP customers and partners, and use a network that is available to those in the corporate world who might find sources such as UStream, Facebook, Skype or similar social networking tools blocked by security rules, and to draw in an audience that aren’t as familiar with the SAP Community Network that Craig’s rabid followers are.  Once his absence began to seem longer-term, I was faced with a decision on my webcast.  ASUG peers asked if I would run my event without Craig available, which I considered, but then turned down, manly out of courtesy, but also because the original intent was mutual sharing – ASUG advantages, features and guidelines with Craig’s audience, and Craig’s personality, mission and charm with ASUG members.

Reluctantly, with short notice, I told the ASUG staff we need to postpone (postpone, not cancel) the webcast.  An email went out, informing the 70+ registrants of the delay, telling them we’d announce the rescheduled date and time when we could.  In the meantime, I was hearing second-hand from Craig’s co-workers on the nature and extent of his injuries, and his projected recovery time.  The “couple of days” degraded into “several weeks”.  The charity drive was important, but could wait.

Wait!? Yes, and no.  I didn’t want to be seen as stealing Craig’s ideas, or limelight, but as they say in the arts, the show must go on.  Since I don’t have the technical prowess to run a weekly internet TV show (or the time, or the bandwidth, or the showmanship, or …) I certainly wasn’t going to try to step into Craig’s shoe, but I could do other things.

The online site Craig set up for donations (www.firstgiving.com/fridaymorningreport) continues to operate, accepting contributions through 31-Jul-2009.  As word spread of Craig’s absence, his friends and colleagues stepped up the giving.  He spent his birthday in the hospital, and we continued to highlight his charity drive.

My prior blog mentioned Matching Gifts programs operated by corporations and businesses whose owners, stockholders and employees see value in actions beyond commercial transactions.  I cited SAP’s program, as the ASUG webcast registration poll on donation trends informed me there are SAP Americas workers who were unaware they can increase the power of their social efforts.  I’m sure there is an inside link, but here’s the external link I found:

My company matches donations to charitable organizations, and I had told Craig that instead of donating online (which has immediate impact and feedback) I’d be sending the paper check and paper work through the mail.  Yes, I know, that’s so last century, but even thought it might be slower, it is effective.

During the Thursday and Friday when the 24 hour marathon originally would have occurred, I promoted the online donation site, and we came within $100 of Craig’s second goal–his first goal had been $500 and we nearly topped that in the first hour after his announcement.

Yesterday, (19-Feb-2009) after 2 weeks of regular checking of my online matching gift report, I was happy to see that my company’s donation was recorded.  I sent Craig an email, not sure when I’d hear back.  Though he might be in the recovery room, his response was rapid and to the point (“awesome” was the key phrase).  I’m glad I was able to share this news with him.

The section of the blog that follows (“Program“) was my wiki page outline for topic I was going to try to cover during my one-hour portion of the show.  This is more link an agenda rather than a script, so may seem disjointed.  And, as many of the URLs are for the ASUG site, you need to be a member, and login, to reach them.  Blog narrative continues afterward (“Meanwhile“).

We postponed the ASUG webcast titled “Using Social Networks for the Greater Good”, notifying those who had registered.  Since I had a conference room booked, I thought I would proceed with a small scale rehearsal of the content I had planned, and invited about a dozen ASUG colleagues, including SAP’s Marilyn Pratt and Natascha Schuberth (who ended up stuck in meetings all day).

My goal was mainly to practice my content, and verify the technology I planned to use (web cam, recording, live links, etc.), and to promote charities or causes in addition to Doctors Without Borders.  The conference call service, and the webcast service, each have options to produce recordings, though I opted to try for a “demo tape” of this rehearsal using my MP3 recorder. It does a great job when two people are conversing in close proximity, though when one is in the room and several others talking at the same time on a speaker phone, maybe not so well.

The attached podcast was recorded in low-fidelity (56Kbs) in order to minimize the file size.  As a result, it’s around 20MB for 48 minutes, with some awkward silences, “look at this” and barely audible mutterings.  I was there, so it’s hard for me to listen to my voice again; perhaps the podcast is for the deeply bored or insomniacs. On the other hand, it might help you go through the above agenda when you have spare time, and do some social cause digging of your own.

Doctors Without Borders sent me a thank you note, received on the day the marathon would have been held, including a poster now on my office door.  Here’s an image of it: 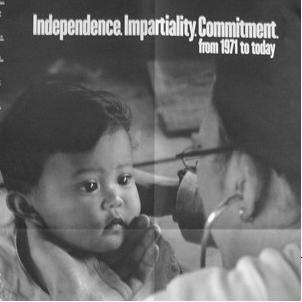 assume you're not JS, no close friend of JS and no ASUG member. now, read this blog and see if you understand a thing.

actually, I don't know what it is all about. If this is a more or less private thing I'd kindly ask you to blog it in an appropriate private space.

well, I am only one of 1.5 millions and maybe anyone else but me understands this blog. then I appologize for my 2 cents,
anton

Former Member
February 17, 2009 at 12:39 am
if I had been reading the blog until the end (which I didn't because I didn't understand anything until the middle) I would have found out that it is describing an attached podcast. of something that hadn't taken place ... or so.

sorry for my ignorance. anton.

I think SCN should, for better visibility of 'non-standard content, iconify blogs which only serve as carriers for audio or video stuff or tag them more visibly than with this little loudspeaker only.

Jim Spath
Blog Post Author
February 20, 2009 at 3:02 am
Anton - you were right, the blog was sketchy. I have revised the content, adding a lot of missing details.  Thanks for your feedback.
I'm happy to report that the community has met Craig's second revised goal for Doctors Without Borders and thanks all contributors.
Stay tuned!
JIm