How to Schedule MDM Inbound Processes with PI ccBPM

Scheduling of MDM inbound processes is required when an incoming data chunk is dependant upon another data chunk. There are cases where such dependencies can cause MDM import failures or data inconsistency.

The PI MDM Adapter together with Cross-component Business Process Management (ccBPM) provide an easy solution for this requirement.

MDM PI Adapter was first released with MDM 7.1. This adapter brings a new and wider scope of integration capabilities for MDM, leveraging the SAP PI and MDM 7.1 API features into a strong and usable infrastructure component. Messaging between MDM and PI is now direct, unlike prior communication which was FTP based. MDM messages monitoring is now possible with the PI runtime workbench and monitoring transactions.

This blog explains how to use these acknowledgement messages for scheduling MDM inbound processes.

Cross-component Business Process Management (ccBPM) applies business logic to PI message exchange processes. ccBPM is part of PI and provides a design tool and runtime engine for Integration Processes based on PI messages. The ccBPM Integration Process is designed as a flowchart containing steps for receiving and sending PI messages, and for processing those messages.

With ccBPM you can control and monitor the messages which are exchanged between PI and backend systems. 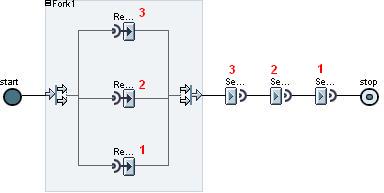 The Integration Process is as follows:

The Integration Process described here can be extended with more logic and message interfaces.

The PI configuration scenario for scheduling MDM inbound message should contain the following:

To monitor the scenario, you can use the PI runtime workbench and\or the SXMB_MONI transaction.

The SXMB_MONI transaction shows the acknowledgement status of the MDM inbound messages with the following icons: