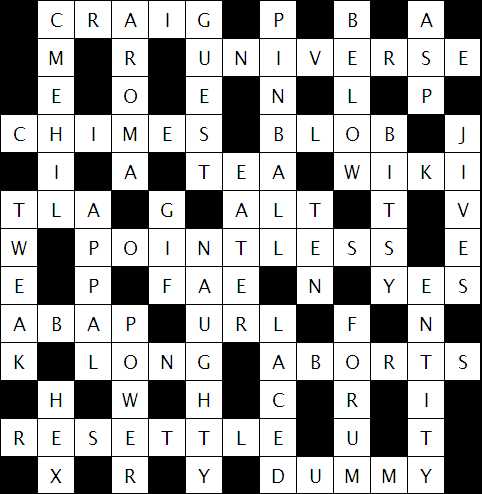 The letters of Rig Chemical, turned about, lead to our favourite community evangelist, Craig Cmehil.

7    Sounds like BOBJ and God are on the same songsheet, creating this. (8)

Being on the same songsheet can mean doing the same thing.  God created the universe, and Business Objects people often create universes – the domain of their data.

Both “Strikes bells” and “harmonious sounds” are synonyms for Chimes.

9    Yeaworth creature stored without format in the database. (4)

Jean Yeaworth directed the classic film “The Blob”.  And a blob is a way of storing unstructured data in a database.

Tea is a drink.  Tea and Sympathy is a play that ran to 712 performance on Broadway.

The initial letters of “Wisdom Is Key Indicator” form the word Wiki, which is a way of sharing and collecting knowledge collaboratively.

A TLA is a three letter acronym.  With four letters, it becomes and eXtended TLA – or XTLA.

With control-ALT-delete, you shut down many flavours of the Windows operating system.

Some community members who’ve violated copyright law by copying other people’s work without any attribution, and didn’t listen to warnings, got their points reduced.  They had less points.  And without benefit is “pointless“.

In the ABAP Testing and Troubleshooting forum, Siegfried has proved many times that For All Entries (FAE) is the vast majority of the time not preferable to inner joins.

Affirmative is “yes”.  And yes appears in the word polyester.

One stitch in knitting the purl.  Take the first letter (the head) off purl, and you get URL.

To long for something is to hunger for it.  And long is often a type representing a larger integer than the standard type.

Message type A is “abort”.  The letters of “or bats” mixed up wildly is “aborts“.

Ctrl-Alt-Delete is “reset”.  “Let” chaotically mixed up is “tle”.  And resettle (putting the two together), means “return to the land”.

A dummy is a counterfeit, and also a moron.

If you play the points system – point gaming – you might find your account disappears, and your posts will be attributed to “guest“.  If you conjectured a result, you’d have guessed.  Which sounds like “guest”.

A ball with pins – a pinball – would be a spiky sphere.  Pinball is one of the games that comes with the Windows XP operating system.

Cleopatra was bitten by an asp.  Asp is a server side script engine developed by Microsoft.

The program to adjust (or tweak) SAPGui is called Tweak SAP Gui.

Appal means both “shock” and “revolt”.

GIF is a popular file format for pictures.

Binary two is 10.  Which looks like ten to those of us who count on our fingers, rather than with electrons. There are 10 types of people.  Those who understand binary, and those who don’t.

Mix up wildly the letters of “A gun? Thy”, and you get naughty – which describes people who’ll do anything to get points.

The Entity is a horror film.   In software/database design, we use Entity Relationship Diagrams.

Might is power.  A bloom is a flower.  Lichenstein is represent by FL, and Portugal by P.  Swap the FL in flower for P, and you get power.

Laced is another word for netted.  A sticker is a decal, which is laced reversed.

32    Four bits represented in one within the xylophone. (3)

A hex digit represents four binary digits, four bits.  And the word hex can be found in the xylophone.