Follow RSS feed Like
0 Likes 198 Views 9 Comments
As long as it is still January it is O.K. to take a look back to all the great things that the SAP Mentors did in 2008.

I am sure this list is not complete. Please add your own highlights in the comments.

Therefore in no particular order:

One of the highlights that I unfortunately couldn’t join, was SAP Mentor meet with Herve Couturier, but I heard from several sources, that it was a very engaging conversation around development, NetWeaver and licensing. Apparently Herve said that this really gave him a great insight into what is really going on regarding NetWeaver in the market. From this meeting we at SAP got the task to come up with a developer licensing scheme to be presented to him this spring. Can’t wait to see what is coming out from that.

Michal Krawczyk is as far as I know the first non SAP Community Network member who’s SAP Mentor Monday: Michal Krawczyk influencing SAP Software. (Thomas Jung had to join SAP to do the same with his ABAP backport 😉

In this video he talks about how it came to be. 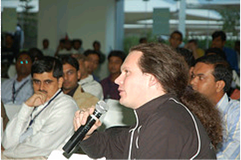 Gregor Wolf asking not one, but two questions at the Sapphire press conference in Berlin, where the mentors were participating for the first time as part of being influencers. Actually one was his own question and the other one Gregor got relayed via Twitter I think it was from Darren Hague or Nigel James. (I know the picture to the left is from the Community Day in Bangalore, not from the press conference, I still think it works 🙂 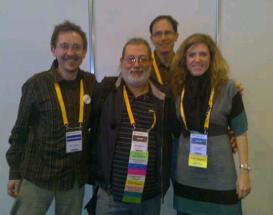 ESME one of the most fascinating developments of last year were in most part driven by SAP Mentors.

For me it showed a new way of coming to gether and collaborating on a worldwide scale, glued together by the passion and commitment to a great cause: Enterprise Micro Messaging. This collaboration was only possible because of trust that was built here on SCN.

This picture shows for the first time united at TechEd in Berlin the European ESME team, all of them SAP Mentors: Darren Hague, Dennis Howlett, Richard Hirsch and Anne Kathrine Petteroe. Even before they started their cool new podcast series created they created the most sought after Community Day sessions: The Hand-on Mentor Tracks. Unfortunately Dan and Ed couldn’t join Thomas and Rich in Berlin, so the two did it own their own. Even more amiable is the fact that Rich paid some of his trip out of his own pocket. (Craig would have loved to participate, but as master of ceremony, he couldn’t.)

What the Enterprise Geeks did for SAP Development at Community Day in Las Vegas and Berlin Ingo Hilgefort did single handedly for Business Objects. He ran the whole track of 4 sessions hands-on and people really loved the insights they got as well as the exercises. 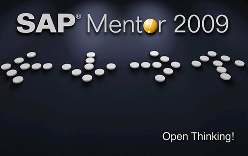 Oliver please provide a link, so that folks beyond the SAP Mentor circle can enjoy it, if they like.

We also started to have some regional Community Days: Lima Peru one was organized by Alvaro Tejada Galindo aka Blag. The driving forces behind the London one was Darren Hague and Nigel James. SD/CRM meets organized by Rajesh Banka in Mumbai. We are so happy, that nothing happend to him during the recent attacks. Ignacio did you organize one in Buenos Aires?

Quite a full year and I would like to take this opportunity to thank the SAP Mentors from all of my heart for all these amasing contributions. You are the ones that make me get up happy in the morning.