ESR strategy for customers with complex scenarios and landscapes

When businesses move to SOA they have to take different approaches into consideration depending on their landscapes. The landscape can be grouped into domains according to different criteria. Complex landscapes can be divided into three domains: development, test and production. In that case, the services are developed in the Development system, tested in the Test system and after quality assurance(QA), they will be used in the production system.

All domains use different registries because the services’ endpoints refer to different systems. It is recommended that every domain has also its own repository, but the same content to guarantee the integrity and consistency of the whole business. The repository contains all the governance guidelines and rules. It also assures that those are followed. The landscape can run one local Enterprise Service Bus (ESB) in each domain, but one central global ESB is needed that controls the flow between the different domains. 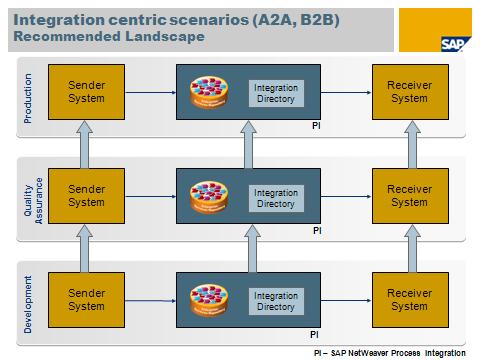 There are various challenges regarding the integration of different systems. We are going to discuss only a few complex scenarios in this blog.

A landscape incorporates old legacy systems in all domains, which do not support the Web Service protocol. These systems should be Service enabled with SAP NetWeaver PI 7.1 (SAP NW SOA Middleware – PI 7.1). First, the legacy system applications in the development system are service enabled and stored in the Enterprise Services Repository and the configuration objects are stored in the Integration Directory. Then the quality of the new services is assured in the test system before they will be moved into the production system. 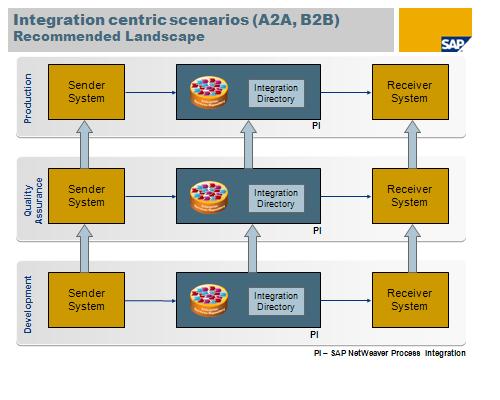 Follow up scenario A:
After upgrade to SAP NW PI 7.1, all old message interfaces are service enabled and stored in the SAP NW CE 7.1 Repository. Then the content of the repository of SAP NW CE is just copied to the new SAP NW PI 7.1 repository. The strategy followed then onwards is the same as mentioned in the previous scenario that is using the SAP NW PI7.1 Repository as exclusive and central one.