At TechEd Las Vegas and Berlin, I conducted a survey and a series of interviews with attendees regarding usage of ABAP, Java, most popular tools, adoption of SOA, and general conceptions about composition.  In most cases, the results were not surprising and put some facts behind general perceptions both within SAP and amongst our greater community.  There were a couple of unexpected findings, and of course, some more questions raised by the data. 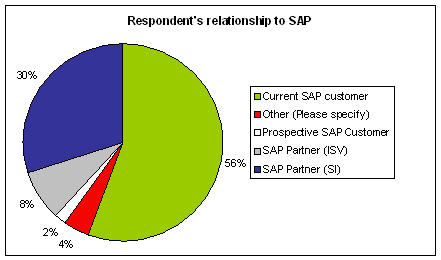 ABAP Development is Alive and Well

We asked a series of questions in the survey and interviews about ABAP development and tool usage.  Not surprisingly, nearly all respondents reported doing development in ABAP.  In fact, ABAP was overwhelming voted the most common development language utilized by the respondents.  Interestingly enough, Java environments from SAP NetWeaver and open-source based were next most common, and Microsoft .NET was the only other competitor that showed any significant primary usage by respondants.  Java environments from other commercial vendors showed very little usage by respondents.

In interviews, its fair to say that many of the attendees are fanatical fans of ABAP development.  When asked what they liked about developing with ABAP, the most common perceived advantages stated included:

Many of those interviewed felt that ABAP programmers tended to come from IT and Line of Business personnel who had technical aptitude.  This meant that these developers had intimate knowledge of business domain expertise, SAP data types, and functions.  The survey showed different results though.  Greater than half of all respondents had a formal computer science background (BS in Computer Science, or MS/PhD in Computer Science).  Amongst ABAP developers, an even higher % of formal computer science training was reported.  My theory is that nearly anyone with technical aptitude can learn simpler tasks such as forms modification.  The kind of people who attend TechEd will tend to be “Guru” or most senior-level developers, and computer science training greatly enhances one’s ability to achieve this level of expertise.

We did not ask about prevelance of using procedural ABAP vs. Object Oriented ABAP in the survey.  However many of the interviewees reported they were trying to do more new ABAP development in OO as opposed to procedural.  Nobody reported rewriting old procedural code into object oriented without a good reason.

Java is Not as Common for Custom Development

Despite the fact that we targeted many classes devoted to Java development and composition, ABAP remains a clear winner amongst our respondents.  In my opinion, this is mostly due to our customers relying on a proven technology base that works well for them, and in which they have invested to build expertise and talent.  I say this because SAP’s Java tools and open source were the next-most popularly reported development languages.  No other competitor showed any significant usage amongst our respondents, other than Microsoft .NET which was primarily reported for UI development. 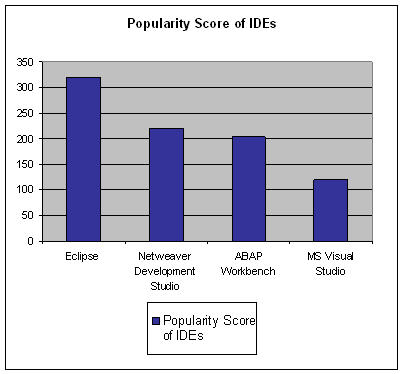 Interestingly enough, the ABAP workbench shows up as the third most popular IDE despite the overwhelming popularity of programming in ABAP.   My theory is that many developers may not think of the ABAP Workbench as being an IDE since this is accessed through the SAP GUI.  Microsoft Visual Studio was the only other competitive IDE with any significant reported popularity.

The interviews yielded interesting testimony that many respondents felt that Java can be harder to work with than ABAP for the following perceived reasons:

Many interviewers stated that available talent dictates many of their design decisions.  Some SIs reported that a few customers were now standardizing on ABAP since WebDynpro for ABAP allows companies to develop for the SAP NetWeaver Portal without having to use Java.

A Good Base of SOA Readiness:  Europe More Advanced, Americas Behind

With regards to SOA maturity, we asked respondents to rate their companies adoption of SOA along the following scale:

__ A) Not yet using SOA in custom development projects

__ B) Conducting pilot projects and limited scope proof of concepts

__ D) Advanced SOA design and governance – reuse as much as possible, custom built services are designed to maximize reuse

This was an area where we found differences between TechEd Las Vegas and Berlin respondents.  In the Americas, slightly fewer respondents reported being atERP 6.0.  A larger percentage of Americas customers reported investigating SOA as opposed to actively working with Web Services, or being at an advanced stage of SOA implementation. 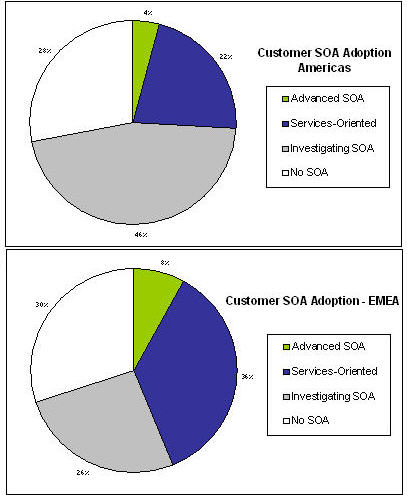 The differences between Europe and the Americas also stood out in the interviews.  In Europe, we found some system integrators that were developing business models around utilizing SAP NetWeaver CE.   They provide templates of industry-specific business processes and components that bolt onto SAP applications via enterprise services, and can be rapidly customized to meet customer’s unique needs.  I won’t mention any names of partners in this blog for fear of accidentally leaving out others that are worthy, but I will say that the ones I spoke with are frequent participants in the forums and blogs here on SDN.

Many Still Do Not Understand Benefits of Composition

In the survey we asked respondents to describe in once sentence what they consider “application composition” to be.  This was an unaided free response question.   We  found that most respondents at most understood only a general concept about composition.  Less than half the respondents associated aspects of functional reuse or managing business processes with the concept of application composition.  I take this to mean that SAP has more evangelizing to do on the topic now that the tools are available.

Different groups within SAP are considering the detailed results of this survey.  I invite you dear reader, to talk back with your recommendations and comments.