Sometimes we come across such a requirement where in we need to send messages to multiple receivers, either sequentially or simultaneously, from BPM. Through this blog I will explain how we can achieve this in BPM using Receiver Determination and Block Step.

Receiver Determination step in BPM gives back the list of receivers configured, for the corresponding message interface, in the Integration Directory and put into a multiline container element of type Receiver.

2)              Transformation step: To convert receiver message interface into sender interface (it is referring a one to one mapping).

3)              Receiver Determination step: To determine the receiver for sender interface.

For the sake of simplicity I have used an abstract asynchronous message interfaces as Sender and Receiver Interface. In order to differentiate between sender and receiver message, I have defined two container elements referring to same message interface. As shown in Fig. 2.

Set the properties of Receiver Determination Step as shown in following figure.Also check the Create New Transaction to see this step at runtime. 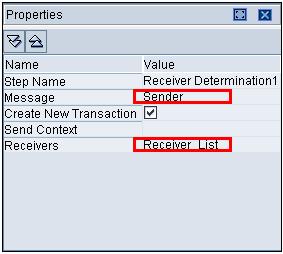 Set the properties of the Block Step as shown in following figure: – 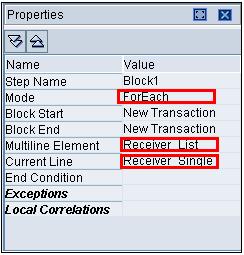 For the Send Step, in properties window select Receiver List in Receiver From, and mention Single line container element of type Receiver (i.e. Receiver_Single) in Receivers. At runtime this send step will use Receiver_Single to determine the receiver. Shown in following figure: – 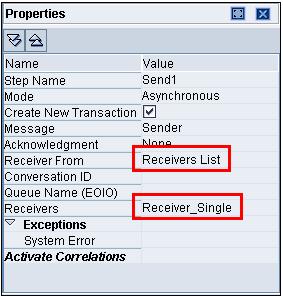 Import BPM into Integration Directory. Mention multiple receivers into the Receiver Determination corresponding to the Send step of BPM. Remaining configuration in Integration Directory, needs to be done as per standard configuration procedure, according to scenario. 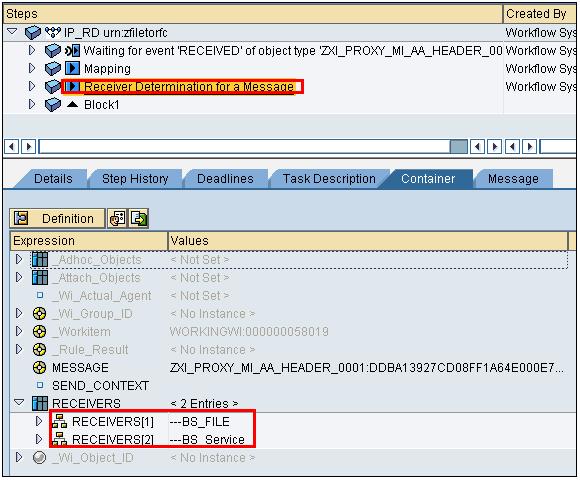 Case 1: Send one after the other

To send message to multiple receivers one after the other, Mode of Block Step is set to ForEach.

As we have mentioned two receivers in Integration Directory, Receiver_List will have two entries, i.e.BS_Service and BS_FILE. Hence , Block Step will execute twice in sequential(i.e loop) order ,as mode is set to ForEach.

To send message to multiple receivers simultaneously, Mode of Block Step is set to ParForEach.

As we have mentioned two receivers in Integration Directory, Receiver_List will have two entries, i.e.BS_Service and BS_FILE. Hence , Block Step will execute twice in parallel(i.e branch) order ,as mode is set to ParForEach.

Application of the this design

I hope this blog gives you an understanding of how to use Receiver Determination and Block step to multicast messages from BPM.