Continuing on the blog series for IFRS, in this blog we discuss the things in bold below

Many countries have adapted IFRS across the globe. They have clearly indicated a roadmap whereby companies in their respective countries have to adapt IFRS. The below graphic represents a rough spread in terms of which countries have adopted, are moving towards adoption 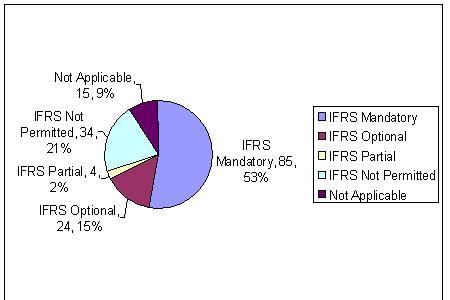 Information, updated as on August 2008, for 162 countries (or jurisdictions):

So you can note that about 113 countries have signed up mandatorily or optionally for IFRS.

Let us examine some of the countries perspective.

EU countries were the first to adapt IFRS and there was a mandate to get all of the listed companies to follow IFRS by 2005.

US has taken significant steps to move towards IFRS.  In late August 2008, the U.S. Securities and Exchange Commission (SEC) announced its proposal on the roadmap that could lead to requiring public companies to issue their financial statements under IFRS in 2014. However the final determination of the adoption would be made by 2011. For this SEC has identified few milestones that would enable it to take a decision on transition of US GAAP to IFRS

Large companies that meet the following criteria would qualify for this early adoption:

While the SEC has singled out about 110 companies that would meet this criterion, it expects to exclude large companies with activities in which U.S. groups are dominant from early adoption.

While the SEC has made no set decision, both companies and CPAs should be prepared for what’s to come. The roadmap presents a clear path to the transition to IFRS, but the SEC has decided to stay short on the decision, which has been postponed until 2011, and to leave open the discussion.

However, a company’s strategy to wait until 2011 for the SEC decision on the transition towards IFRS may backfire since once the decision is made, there would be almost no time to move properly to IFRS.

Experience shows that the transition to IFRS will impact not only company’s  accounting department, but the entire company because:

·        The reporting, including budgeting, will have to be revisited along with systems in order to maintain an effective management of the performance.

China decided that Chinese companies would adopt IFRS in 2006. This move was taken to boost foreign investment into china. However state run enterprises would be execmpted from the ‘related-party’ disclosures.

Japan agreed to move to IFRS by 2011. Japan’s claim was that its existing GAAP was similar to IFRS and saw no issue in Japenese companies moving to IFRS in that timeframe.

As seen above many of the leading developing countries have either adopted or specified a clear roadmap for adoption of IFRS. This presents a huge opportunity for the world to become unified in terms of financial governance and reporting.

IFRS is a combination of IFRS and IAS standards and is very exhaustive. The below list provides what each one is and what they cover:

IFRS 6 – Exploration for and evaluation of mineral assets

IAS 20 – Accounting for Government Grants and Disclosure of Government Assistance

You can see that some missing numbers in the above list , these are standards that have been combined into others or removed, and therefore they no longer exist.

Understanding the above standards in detail would be valuable for Business Process Expert consultants who want to implement IFRS.

We would continue further on this blog series as we move into more technical aspects of IFRS and logically move towards how SAP’s solutions are suited to enable IFRS.

Also refer Global convergence through IFRS – Part I of the blog series.