Riding the SAP Cluetrain to Berlin

On September 24, 2008 Craig Cmehil went public with his idea having a SAP TechEd ’08 Cluetrain. As I saw it I though what a great initiative. SAP TechEd isn’t just the lecture & hands on sessions, it’s about connecting with others facing the same challenges. So I though the Cluetrain would be a good opportunity to start connecting and collaborate even before the official start of SAP TechEd. I canceled my direct flight to Berlin and booked one to Frankfurt.

I got to Frankfurt a bit late but still was the 4th person to meet up at Cafe M near track 22 in Frankfurt (Main) Main Station. At 4 pm all got together awaiting the train. Unfortunately it was delayed 10 minutes.

Riding the SAP Cluetrain to Berlin

We got on the train and had a lot of space after the mess cleared up. Unfortunately Deutsche Bahn haven’t cleaned up the coach and it looked like there where transporting Zombies before. Could probably have been caused by soccer fans attending the Germany – Russia game yesterday.

The first topic we’ve talked about in a smaller group was Mirror neurons. Wikipedia defines it as “A mirror neuron is a neuron which fires both when an animal acts and when the animal observes the same action performed by another (especially conspecific) animal.”. Michael Schwandt brought up the idea of a golf player who plays better when he plays with a golf pro. 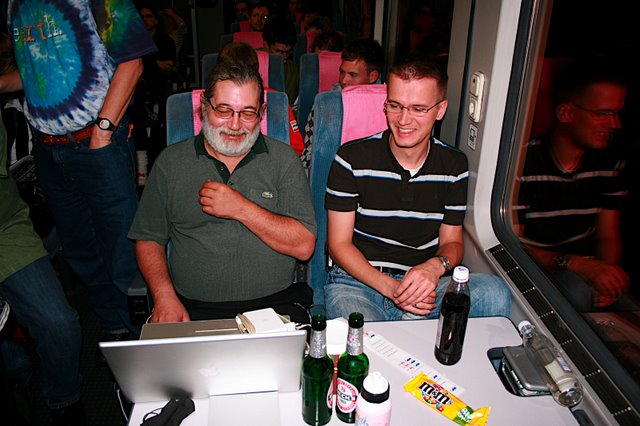 Then I got introduced to Charlet and Nicolle. We had a chat about SAP’s E-Commerce solution. Nicolle is currently in an implementation project using the 5.0 Version against a ERP 6.0. Great to know now someone to ask. We’ve explained a lot of things around interfacing SAP through the different ways like RFC or WebServices.

Martin Raepple told us about his OpenID-enable SAP NetWeaver project. It seems that it is also planed to have the SAP Community Network act as a OpenID Provider.

Don’t forget to check out the Blog’s of the other Cluetrain rides:

I think the Cluetrain idea worked out very well. I will definitely join it next year again. Talking about next year TechEd will be back to Vienna. There is a direct connection from Frankfurt via Passau and Linz that takes about 7 hours. Perhaps it’s better to start in Munich which provided many international flight connections too and from there it’s only around 4 hours.