The monthly figures are in and productivity results are printed in bold. Yet again, as a system administrator, you notice that the lack of Downtime planning has lead to your key productive systems being unavailable of over 30 hours against the permitted 20 hours.

Your have spent hours clearing your Alert Inbox every Monday which has been flooded with spurious alerts indicating system non availability – during all pre planned Downtimes.

You spend close to 3 productive hours every week on Excels, planning a Downtime, seeking approvals from all key stakeholders, notifying the necessary business & system users and yet find your Help Desk working 2/5ths of their time on system unavailability tickets

If you are looking for an option, to get over this mess and get around these unproductive and repetitive layers of chaotic excel work, read on further to discover Downtime Manager (DTM) provided with the System Landscape Management Work Centre of SAP Solution Manager.

Released with Solution Manager Support Package 15, the chief idea behind the inception of Downtime Management was to suppress the spurious alerts generated during planned system unavailability. Growing on this idea, DTM, in its basic flavor, now offers system administrators

In the “Planning” stage, DTM provides the user with the list of all satellite systems monitored by the Solution Manager. This includes both ABAP and Java systems, listed along with all the servers, instances, and logon groups.

Hence at any given point of time, the system administrator has a holistic view of his systems, which allows him to optimally plan Downtimes among related systems. Overlaps, if any, can be identified.

Downtimes can be scheduled as Single Downtime and Recurring Downtime. 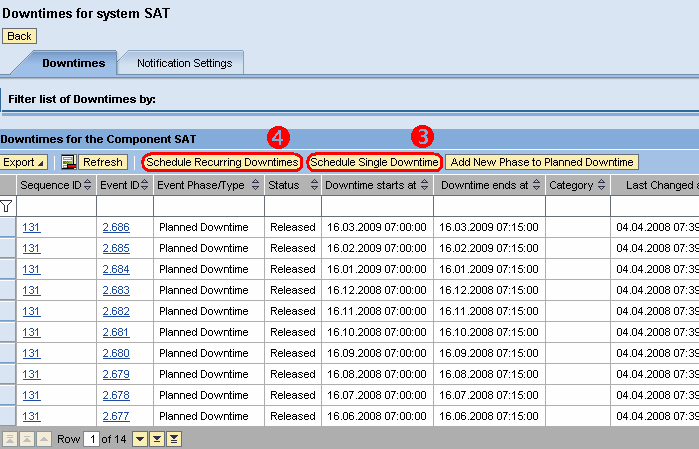 This is referred to as a “family” of Downtimes, each of them having a unique “Event ID”, but at the same time have a common “Sequence ID” This reduces the administrator’s calendar work neatly by a factor of over 95 %.

Example: The administrator can plan a Recurring Downtime every last Sunday of the month. He /she can choose – a monthly recurrence scheme- every 5th Sunday – between two calendar dates. Most normal months tend to have 4 Sundays, with the “4th” Sunday being the last Sunday in that calendar month, but consider a month of 31 days, that starts on a Sunday. In such a case, there would be 5 Sundays in that month, with the “5th” Sunday being the last

In a pre DTM scenario, the system administrator would have to tediously scan the calendar across the months, to locate the last Sunday of every month. But with the usage of DTM, it automatically recognizes the intrinsic purpose of such a recurrence pattern; picks the relevant dates & plans Downtime on the “4th” or the “5th” Sunday – whichever turns out to the last Sunday of that month.

In addition, to planning a regular Downtime, the other options available are

To handle scenarios, wherein, from a family of planned Downtimes ,a certain event ID/ a Downtime , clashes with a Critical Uptime, DTM provides the option of moving that specific event out of the sequence.

The advantage of such an exception handling mechanism is that, it ensures that the rest of the sequence of Downtimes in that family remain unaffected and proceed as previously planned – and the sole exception that was moved out of the sequence, can be “deleted” or “edited” to happen at a later time slot on the same day, complying with the business rules.

System administrators have the option of notifying the owners and users of the target system through email, SMS or system messages.

This feature gives you the option to suppress spurious CCMS alerts and save yourself cumbersome removal of alerts that you knew all along were not to be taken serious.

In addition, data from DTM is used in BI reports for availability reporting. For more details check SAP Note 1129052.

While DTM is already a promising and convenient tool to plan and record Downtimes, many improvements and functional enhancements are yet to be delivered.

Repeated customer concerns include the need to seek approval from several stakeholders – both IT and business related, before releasing a Downtime on a system. Currently, DTM addresses this concern, only by the option of putting a Downtime into an “In Review” status, exporting the planned data on to an Excel file and assuming that the workflow between the parties is done independently. In future, planning and seeking approvals for Downtimes, through a workflow process between custom built roles of “Owner” and “Approver” will be sought. This workflow is planned to be eventually integrated with the Change Request Management of Solution Manager.

This eventually translates into a scenario, where not only will a Downtime be planned, reviewed, released, executed and so forth, but it will also be connected to what is actually meant to happened during the Downtime (for example, maintenance work).

Currently DTM does not support optional Automation i.e. optionally – enabling system stoppages at the beginning of a planned Downtime. Tentatively planned with Support Pack 17 or latest Support Pack 18, this situation will change.  You will be provided the option to choose between “manual” and “automated” “Stop” and “Go” of a system. The manual option will provide you with a reminder, of an upcoming Downtime on a system, based on which the system has to be manually stopped. The automated option automatically executes the Downtime, by shutting down the system at the scheduled time.

I have tried to explain DTM through it basic functionality in this blog, but do keep visiting this page often to learn in detail on how DTM in principle operates with the CCMS world, which I will cover in the next edition.