Yesterday afternoon The specified item was not found. send a Tweet that Josh Weinberger is live Twittering from the Press Conference announcing “SAP and RIM Usher In a New Era for Enterprise Mobility“. I joined his Twitter Feed and also watched the Live Video Broadcast. From the Video Replay I’ve taken the following screenshots illustrating the native integration of SAP CRM in a BlackBerry Device.

Screenshots of the live demo

Mike de la Cruz told the story of a sales representative who got awake by the Alarm of his BlackBerry Device. After he switched off the alarm he opens up the calendar and sees an Appointment at 12.30: 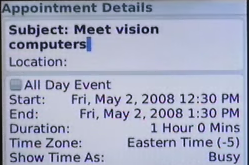 But in the Context Menu it is possible to jump to SAP CRM by choosing “View Account”: 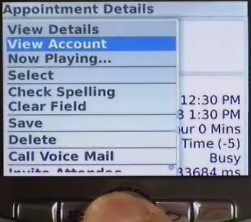 Now we see the Account Details of the Customer “Vision Computers Networks”. Note also the “MAP IT” button which allows you to display a Map of the Accounts location: 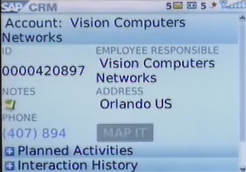 By scrolling down the “Planed Activities” and “Interaction History” can be viewed: 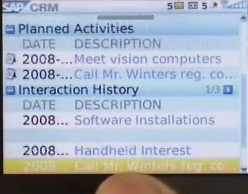 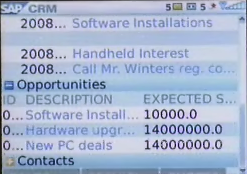 By choosing one of the opportunities details can be opened: 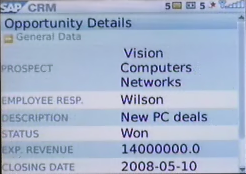 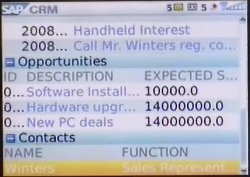 From here it is possible to initiate a call via the context menu: 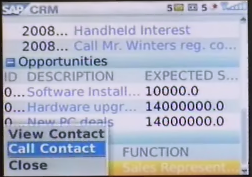 After finishing the call: 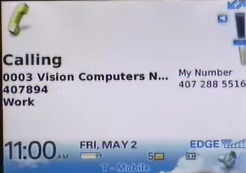 The call can be logged in CRM directly via the context menu: 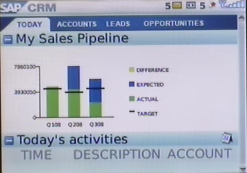 And also the new leads created in the marketing department. They are also indicated by a red star in the upper right corner beside the new mail icon:

I think that this new product which is a co-innovation development of SAP and RIM is a great step forward regarding acceptance of CRM in sales force. As announced at the press conference SAP and RIM have plans to extend this kind of solution also in the ERP and SCM area. If you attend the upcoming SAPPHIRE 08 in Orlando or Berlinyou should check out the booth where this Product is presented.