I started this blog in November 2007, right after getting back to the office after taking the ADM107 class.  I intended to put what I learned into practice “soon” so I would not forget what I learned.  Well, it’s now the middle of February 2008 and we have finally made time on the calendar to get back to this.

This addendum (#1) will describe prerequisites we met, the agent configuration in our sandbox system, show the results of the first few days with one monitoring agent, and talk about the next steps.

Life is relatively easy when you’re in a class, with a focused instructor, classmates working on more or less the same objective, a system or set of systems that have been tailored fresh out of the box, and a generally distraction free environment.  Go back to the office and guess what?  Priorities intrude, the system isn’t as clean and stable as in the lab, and most important, changes to even a sandbox system can interfere with developers projects and timelines.  The nice thing about using your own systems is that the date and time formats are what you expect, in your timezone.

Anyway, back to Chapter 1.  Install the CCMS agents.  Make sure they stay running.

Our topology for baby step #1:

Central Performance History (CPH) will reside on our Solution Manager system.  As of today, this is a single node.  Thus, no high availability, no path to production.  When the system goes down for maintenance, backups, etc., it’s down.

We will install agents on R/3, BW and SCM systems, starting with R/3.

So, which agents?  Basis said we shall have “sapccmsr” and “sapccm4x“.  So we shall.

Fast forward past the agent install, which apparently went online in November:

The agents we have are from September 2007, so they are pretty fresh.

The next step is to log into the SAP system to verify the agents are running.

Transaction RZ21 “Monitoring: Properties and Methods” is the starting place for configuration and verification steps.   As in many cases, a few menu paths lead to the same place.   Under topology, pick “Agents for Remote Systems”. 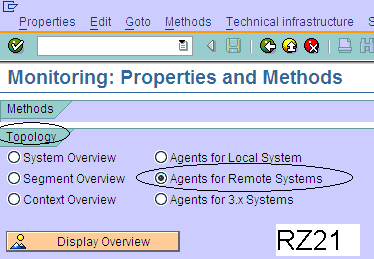 In class, we installed, configured, tested and used Windows agents.  At work, we have UNIX, so the OS start up routines are different.  In either case, the agent tests need to pass.  We found one “ONLINE” and one “SHUTDOWN”. 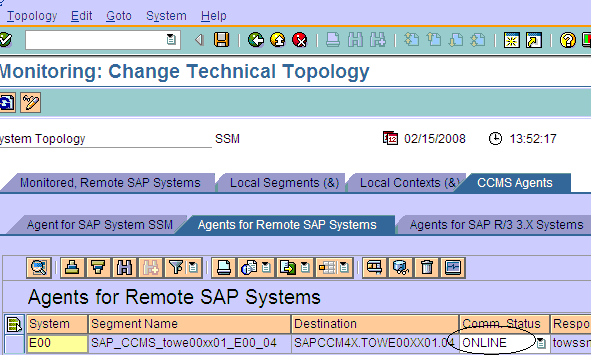 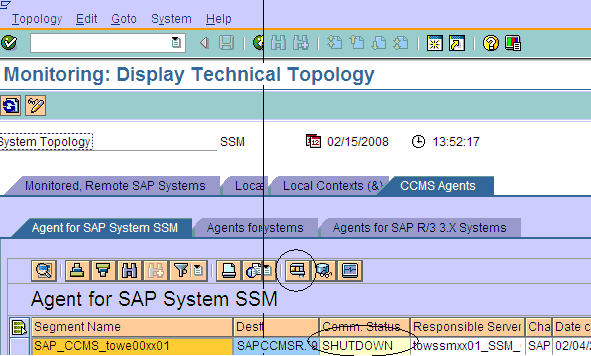 Being UNIX savvy, I checked and found only one daemon running:

If you look closely, the running daemon is “sapccmsr” while the reported shutdown agent is the “sapccm4x” one.  Don’t ask me, I’m an engineer, not a topologist! After the Basis team went back to their desks and threw some runes, these were running:

Then, clicking on the “Monkey Wrench” icon as circled above showed successful connection where it had not before. 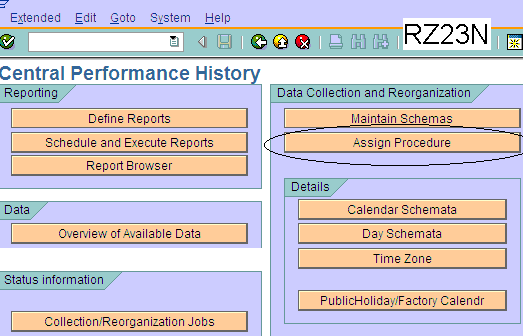 To verify that CPH is recording correct values, we can use a parallel test.  Here are 2 shots from the RZ20 monitoring tree drill down: 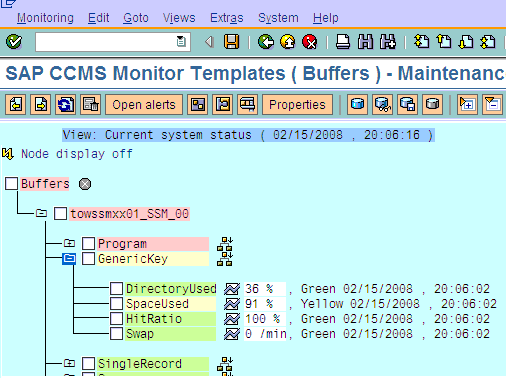 BAD – the hit ratio has dropped.  We shall see if this is noticeable with one-hour collection and daily aggregation.  It might be necessary to use 15-minute (quarter hour) intervals. 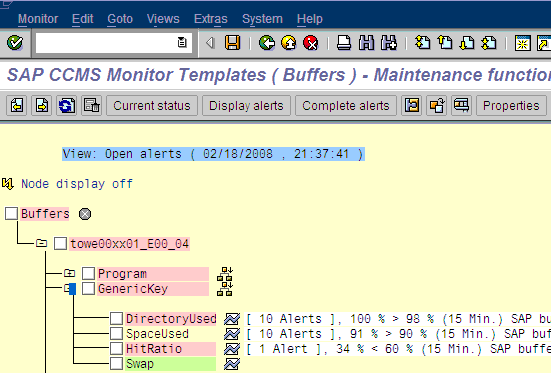 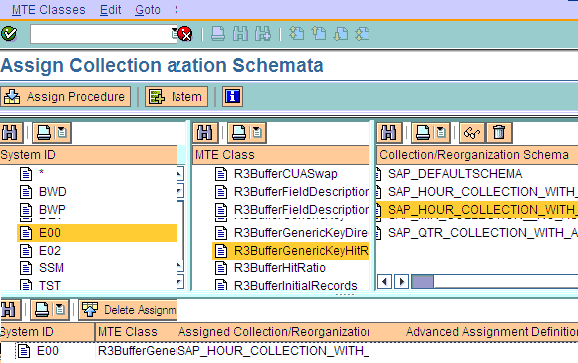 Here is verification that the background jobs are running:

This menu is accessed via RZ23N “Overview of Available Data” once the gears are turning.

Here is the CPH report grid in 2 dimensions, showing data have been collected over the past several days.  It works!

As noted, this is an ALV graphic directly created within CPH menus.  I’ve altered the Y-Axis to include a maximum 100% (it was 101%) and a minimum 95%.  I also selected one hour which showed up as red squares on multiple days.  That’s handy I guess. 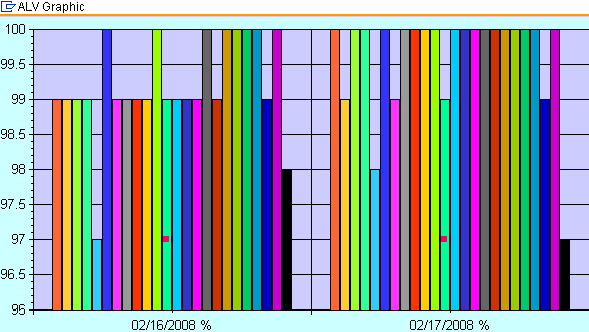 I then brought the same data into Excel and created a scatter diagram.  This is a little easier on my eyes. 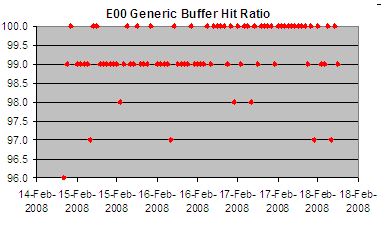 [All opinions expressed are mine.  No opinions were harmed in writing this blog.]

appreciate your blog on the set-up for CPH.

i have now started gathering the data but what did you do regarding reports or did you make use of the BI collection cubes.

I have placed the agents on all our SAP servers (CRM,ECC, EP) and an using Solman 4 sps15 as our central server (CEN) and have followed your steps in rz21 and rz23n.

But what next - where do we go from here?

Rather than answer the email, I thought I'd share this with the community, despite not having much more to share (yet).  We have configured our DEV systems to collect CPH data, aggregating in our Solution Manager system.  Just yesterday the Basis team asked for specs to size a second SolMan system, as we have been running without redundancy.

We began to configure specific transaction monitoring, and while data collection is working, the feed to CPH is not.  We tried to connect with Dieter Krieger in SAP Germany for advice, but have yet to find a time window.  Once that aspect is working, our plan is to set up quality and production systems.
As for trend reporting, feeds into BW are farther into the future.  I'm able to view trends for the parameters we are measuring, which is more than I could do using ST03 workload monitoring standard functionality.
Bottom line, this project has taken longer than I would like, but we continue taking small steps forward, and once I have more to show I will post addendum 2.
Jim