Graphical varaible will replace a lot of previously development effort for global variables. It makes the development process much easier and brings a lot of clarity on when a “global” value will be calculated.

This blog will go into the details on its advantages and usage.

Let’s take a look at the following mapping requirement:

Assign values to the 2 graphical variables:

NOTE: With where the variable is defined, it is clear as to when it will be executed and can be used.

Use the variables in mapping:

Even though the mapping shown here is quite simple, but when there is a complex structure, using variables (especially, when they have to be re-used over-n-over again) can save a lot of development and processing time.

Below is the result of the mapping. The graphical variables are not sent to the target structure. The “recCount” value for each row is only calculate once during the mapping, not for every row. The “fullName”, however, is calculated for each row. 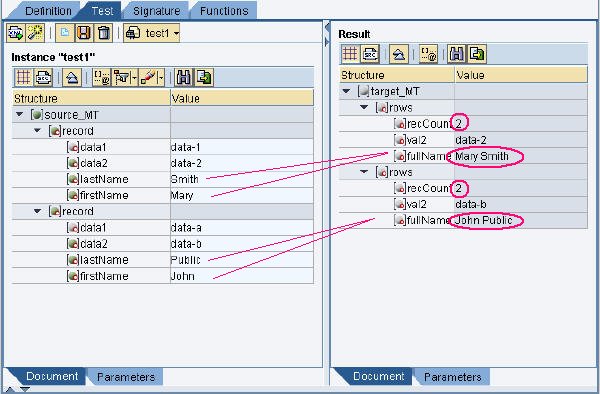 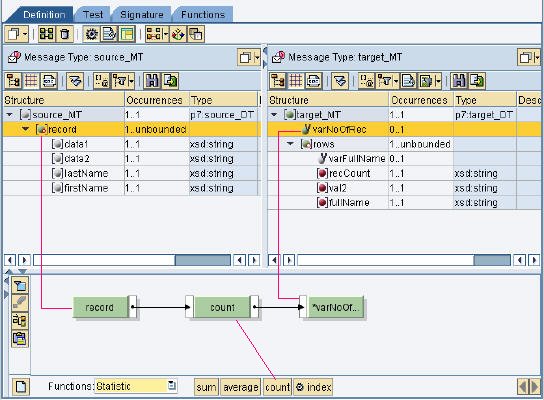 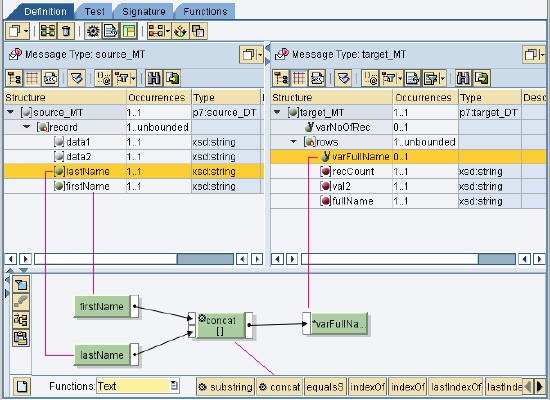 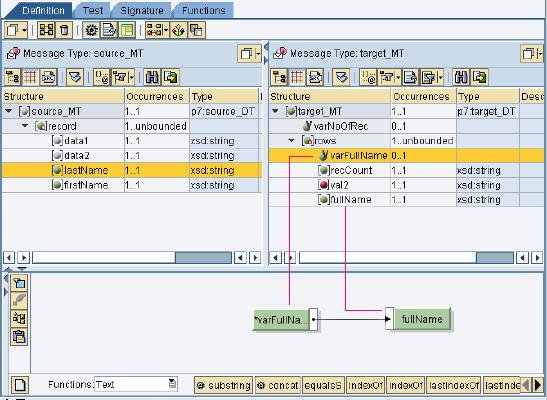 Prateek Raj Srivastava
February 14, 2008 at 2:40 am
Thanks.. 🙂
This will surely reduce the pain of the complex mapping scenarios.

Former Member
February 18, 2008 at 5:52 pm
Very useful feature. Makes mapping development a song. Where can I get a list of all the functions available [viz. count, concatenate etc.]

Former Member
Blog Post Author
February 18, 2008 at 7:38 pm
Hi,
All functions in message mapping can be used to map to the graphical variable.  Treat the variable just as another target element.

Former Member
February 19, 2008 at 12:43 am
what about the running value of variable for example I want only last value of graphical varibale or reset the value before start ever recrodset etc.

Former Member
Blog Post Author
February 19, 2008 at 4:41 am
Hi,
The value of the variable is calculated each time when its parent node changes.  Not sure if you can reset that value within the recordset.

As for getting the last value, you might be able to create a variable at the root level and map it with an UDF to get the last recordset.

Former Member
May 1, 2008 at 4:13 pm
This functionality is very useful and was missing in SAP XI initial version. Other mapping tools like Mercator and all have this functionality for long..and it's very handy..

I have tried implementing it in one of my complex mapping. Whenever variable has single value in it, its working fine.
But when the variable is array or its queue shows multple items, if i use if it gives an error message.

Is it like it only able to handle single value?

When the variable is added, the occurances is (0..1).  There is no way to change it.

All your blogs are going to help me to learn PI 7.1 without training 🙂

All your blogs are going to help me to learn PI 7.1 without training 🙂

nice blog. But I don't think that this feature is so important. With XI 3.0 / 7.0 you can use simple UDFs implementing global variables. This new variable feature can just handle single values, is quite unhandy (the name of the variable cannot be changed definded dynamically) and makes the graphical flow even more complex (by addding graphical variables to target structure).

BTW: I think you mismatched "source" and "target" in somce cases, for example: "This variable "varFullName" will be executed for each occurence of "record" in the target." I think you meant "source" as "record" is s source elemnt?

Former Member
July 8, 2009 at 10:24 am
This is a nice feature but at runtime the values from a variable are not displayed when you take the option - "Display queue" from the definition tab on the message mapping. This is not helpful when debugging. As per the example below, if you were to right click on the lastname in the dest dtructure tou would not be able to see the queue of values.

Why we cannot assign any variable type? I believe the default type is "xsd:string".

If the target field type is numeric, than variable require conversion in every mapping step?

I tried to use the same in one of my mapping. (in place of UseOneAsMany, i.e to replicate the header information in all line items ). When i tried to add more than 2 variables, I m getting Java Heap space error. and while trying to save it, i m getting NullPOinter Exception.

This is really useful blog .. But can we keep on increasing varCount on target depending on the source items dynamically ..
I mean to say if there are 3 items coming from source .. I need to get 1,2,3 as varCounts in each of target field ..