I’ve been rather quiet so far but I’ve not been without things to do. Recently, OK, yesterday one of those things was blogged about on ZDNet by Dennis Howlett also a blogger here on SDN and BPX and a fellow Irregular of mine. What he blogged about is a small application currently in a small pilot phase internally, I created the application out of the basic need for a Twitter like service but inside of hte firewall with a few additional features. 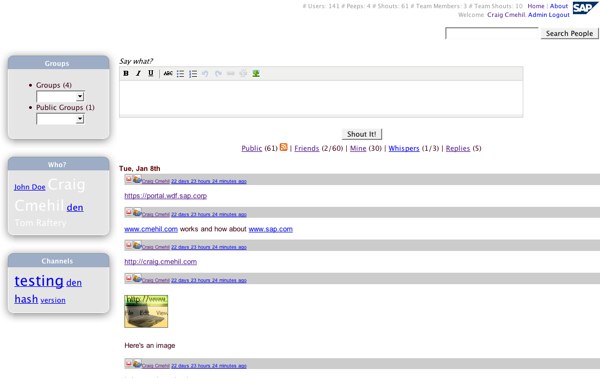 The screenshot there is the current UI as of last night about 10 mins before Dennis posted, but not in enough time for QA for me to send him an updated screen shot.

What followed within a few mins (while I was finishing QA) on Twitter itself was several pinging me and sending comments.

Star your favorite Twitter updates and they’ll be saved for you here!

As you can see looks like the project might be right on time for several people’s thinking. What I copied there was actually from my favorites collection there are several internmixed messages as well but those I marked as “favorite”.

The internal application is a prototype that I don’t expect to go far, rather I expect the concept and idea of it to maybe catch some attention and that is what I hope goes far. It is quite packed with features:

I used PHP 5 and MySQL to create the prototype and it consists of 23 files and 22 images, currently load time is measured in microseconds and the biggest hassle was the CSS for IE6, IE7, FF, Safari BUT it’s usable now in all of them. I estimate (no serious count done) at around 4000 lines of code or so.

Some might notice that the design is quite similar to a personal (NOT related to SAP) project i have as well – OK it is, I’m lazy when it comes to that on prototypes.

Some might think me bad considering I Craig’s predictions for 2008 to have potential in the Enterprise, all the while I was working to make it happen. I personally don’t consider that to be bad, I saw a need and a potential and I went for it. But what have I really done? I’ve given a whole new audience a safe environment to try a concept out, often times within a company many are not willing to step forward to try something because they are unsure of whether it’s safe to do so. I created that safe environment – all screen shots are from my dev system not the live one internal.

Ok, what’s next for this? The pilot is running and I’ll see if adoption occurs – if it does I will continue to push if it does not then I will move on to the next idea. In the meantime believe it or not I am dusting off my BSP glasses, refreshing in my NW install on my desktop and cotninuing to create a NW version of the tool – so far it’s moving slowly because I need to remember everything but I figure within the next couple of weeks “Shout It” (current code name) will be running 100% on NetWeaver as well.