How to communicate architecture  Technical Architecture Modeling at SAP (part 1)

How to communicate architecture – Technical Architecture Modeling at SAP

“The business of software building isn’t really high-tech at all. It’s most of all a business of talking to each other and writing things down.” [Tom DeMarco 1995]

There are many occasions where people need to talk about technology and architecture, for example getting requirements or approval for a design by customers, aligning development efforts with other groups, or reporting progress to management.

In some scenarios, you have to get technical information from people, in some you discuss with others and exchange experience, and finally in some scenarios you spread information to many people in a presentation or via a document.

Common to all scenarios is that both background and expectation of the communication partners may vary considerably. This requires an adequate abstraction from technical details.

Conceptual models are a means to support this communication. Models can establish a common language for communication. Using a graphical representation of models helps communication partners to conceive an idea more quickly, and in a discussion, there is something “to point at”, to focus the discussion.

SAP builds software on a large scale with division of labor. The need for communication about technology and architecture is therefore obvious. For this, SAP uses an internal standard for architecture models, TAM (Technical Architecture Modeling).

Why standard UML falls short or: Look at the reality

Isn’t UML the de-facto standard to describe software architecture? Well, it depends. UML has a good tool support and supports the majority of object oriented programming languages with their variety of language constructs. This leads to the complexity of the UML standard that has to cover all aspects from high-level to low-level modeling of software, supported by tools. This complexity is the main obstacle for using UML to communicate architecture.

Take a look at typical documents that give an introducing or an overview on the architecture of a product. They start with a system overview, where you find the major building blocks and their connections. In most cases, these are just “box-and-line” diagrams using an ad-hoc notation without clear semantics. Only in rare cases you find a UML compliant diagram. More exaggerated: The industry standard notation for conceptual architecture diagrams is – Microsoft® Powerpoint®.

SAP has recognized this problem years ago and now uses an internal standard for architecture models based on UML and FMC.

What is TAM (and what not)?

TAM stands for Technical Architecture Modeling and defines an SAP-wide standard for technical architecture models. TAM has a long history at SAP (the predecessor was introduced at SAP in 1990) and is based on best modeling practices. On the other hand, it is now based on the UML 2.0 standard, and defines a reasonable subset of diagram types and elements needed for SAP’s purposes.

Finally, TAM extends the UML meta model by the FMC block diagrams that have been used at SAP since 1990. They are the most important diagram type for conceptual modeling with TAM. 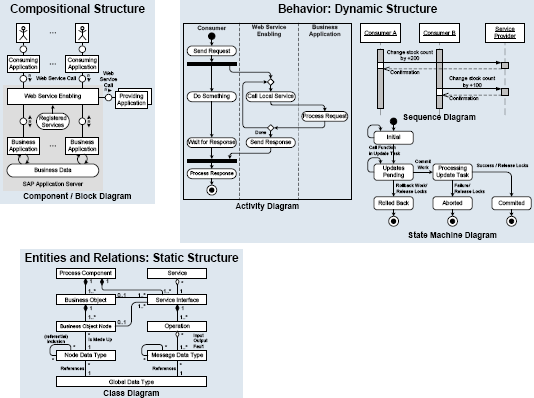 Figure 1: TAM on conceptual level: The three aspects and the diagram types

Block diagrams show the static structure of the system. Here you find agents that process data, storages to store or share data, and channels by which agents communicate. Only agents are actually doing something, storages and channels are passive elements. A block diagram does not describe any behavior, and it is an exemplary structure, a snapshot of the system at a certain point in time.

Behavior is the second aspect. Usually you either describe the behavior of one agent or the interplay among multiple agents. TAM offers three UML diagram types for that:

UML class diagrams are used in TAM for Entity-Relationship models on conceptual level, for example for topic maps or as a glossary. Of course, you can model data structures or relations between data stored in different storages or exchanged via channels as well.

Let’s have a closer look at block diagrams using an example taken from a report about SAP Service Provisioning [SAP2006a]. 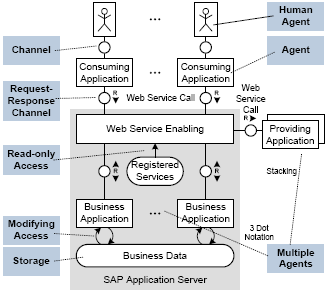 The most important building block is the agent, depicted by a rectangular shape, in figure 2 for example the business applications. Agents are the only ones that do something, that is they process and operate on data, and they communicate with other agents. A special case is the human agent, depicted by a stick man symbol. Agents communicate via channels that can be annotated by the kind of request or protocol (here: Web service call). The “R” and the small arrow can be used to indicate a request-response communication where the arrow indicates the direction of the request. Finally, storages are used to store and share data. Access arcs indicate which agents access which storages. The arrows show the direction of data flow, that is whether an agent has a read-only access (one arc from storage to agent), or a modifying access (two arcs, one for reading, one for writing).

Of course, figure 2 only shows a very abstract and coarse view of the system that is mainly useful to introduce the main building blocks of a system and its terminology. Figure 3 shows a more detailed view which refines the Web service enabling layer and adds some other components that were not helpful for the abstract view of figure 2, for example the HTTP communication layer. 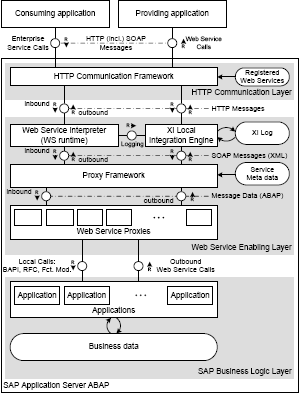 We see that the Web service enabling layer provides agents to parse and create Web service calls, and that a proxy framework routes incoming calls to the registered Web service proxies that do the actual mapping to the business applications using local calls. In comparison with figure 2, there are more technical details, such as protocols or data types. There are of course further refinements that get closer to the implementation. Look at [SAP2006a] for more information.

This was just a quick glance on what you can do with TAM. My next blog posts will go into details of the three aspects and the corresponding diagram types. But of course, there is more to architecture modeling than just the notation of diagrams. And finally, I encourage you to use TAM to create your own models and use them for communication. Stay tuned.

[TomDeMarco1995] Tom DeMarco: Why does software cost so much? And other puzzles of the information age. Dorset House, 1995

Dipankar Saha
February 12, 2008 at 2:43 am
Hi,
First of all thanks for this nice and informative blog and the session in TechEd as well.
I've a doubt regarding TAM while used in SAP application design. Unlike standard programming languages e.g. Java SAP Netweaver has added an additional layer over the package concepts i.e. Development Components and Software Components which actually overrides the standard access specifiers (public, private, protected) by defining public parts through which only component dependencies can be specified. How to model the DC, SC and the dependencies using TAM?
BTW, I'm very eagerly waiting for the next blog in this blog series.

no continuation to this article?

Dipankar, can u share some SAP architectural model documents, if you have any? incase you are active on EA space. thanks.