Unicode – Episode 0.005: Journey to the Edge of Quality

Planning for Quality and Production

Our landscape for this second phase is more complex: 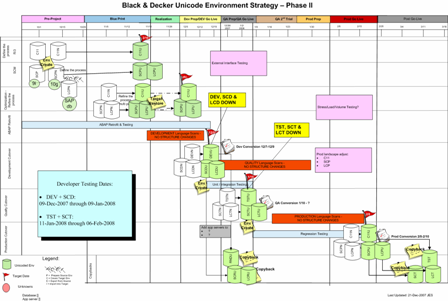 Each cylinder represents a working database, with disk storage up to 6TB, not including the file export space.

We expect to have under 100,000 vocabulary words to identify, similar to what we saw in our prior R/3 and BW conversions.

For the last several days, we pushed the TST servers average CPU values up and over 90%.

This is a tabular view of the above SPUMG status screen shot, showing progress on the preconversion steps.

Here is an extract from SM66, showing the background process jobs doing the table scans.  Some have been running for over a week.

Finally, here are the SQL statements for UMG_SCANNER that have done more than 10,000,000 disk reads…