Starting with NW 7.0 SP13 the software component provided by SAP SAP_BUILDT (includes the main build plugins) is enhanced with a new Development Component with the name tc/bi/fct/extlib. This facet DC can be used to simplify DC structures a bit by allowing developers to combine the functionality of an “External Library” DC with a “J2EE Server Component Library” DC.

You want to use some Java libraries that were produced outside of NWDI. Since you want to reuse those libraries within your application development you need to package these libaries in a component model format – a Development Component (DC).

For developments prior to NW 7.0 SP13 this meant you had to do the following:

With the new external library facet included since NW 7.0 SP13 the process is much simplier: 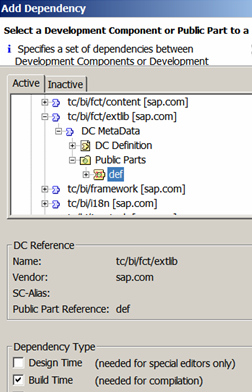 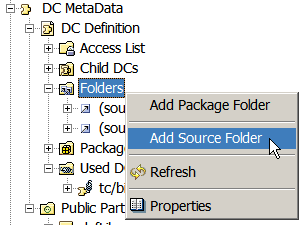 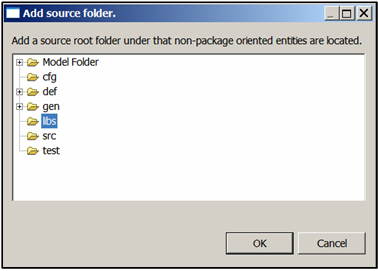 While this may not look much shorter in this list here you will find that it takes much less time and keeps the DC structure much more simple. Just try it.

If you kept to the explanation above you should have

Problem: The jar files of the external libraries are neither packaged into the SDA file nor copied to the public part.

Your DC MetaData should look like this. The libs folder is added as source folder in the DC metadata and a build-time dependency to tc/bi/fct/extlib exists. 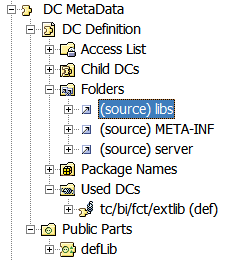 Daniel Graversen
December 19, 2007 at 1:41 pm
I have always spend a long time adding external libraries to my software components. I home this will help.
/daniel

Former Member
July 11, 2008 at 9:55 pm
Congratulations! Amazing approach! But as of NW7.0 SP14 was installed and I've created an external library in described manner and there was no public part available for another DCs. Is it normal behavior? In my case all the DCs are Local Development Components. Does tc/bi/fct/extlib component applicable for NWDI only? The metadata of external library projects is the same as you had shown in the presentation and all the needed jars was included into the deployable sda of the project but the case of usage such external library with the other DCs is not possible. The reason is that the dependency to the external library was declared but DC is unable to resolve any classes from external library neither from 'Organize imports' nor from manual declaration

Former Member
February 17, 2009 at 2:01 am
Same problem for me with 7.00.15.
The J2EE lib was successfully deployed, contains the jars and could be referenced, but no entities available in the deflib PP. Therefore no design time dependencies possible which makes this feature less useful 🙁

Former Member
March 5, 2009 at 6:04 pm
I tried to follow this recommendation but creation of a local 'libs' folder is not reflected in my NWDS. Here I still see the other folder types except for 'libs'.
Any suggestions?

Former Member
April 2, 2009 at 1:13 am
Hi I followed your steps
1.Created J2EE/Library Project
2.I put that DC in Used DC of my WebDynpro Dc.
3 Wrote the code but it is not recognizing my Jar file(For ex JXL.Jar workbook cannot be resolved)

Please give me some hints

Thanks and Regards,
Tulasi

Former Member
May 31, 2010 at 9:39 pm
Hi,
Nice blog. But even after following the steps we are still getting classpath error on building a Webdynpro DC.Incomplete classpath.

If you look at the build log of your WebDynpro DC the classpath of the generator should be logged. Do you see your Jar in that list?/lib/java/ folder if the build of the external library correctly put the Jar file into the public part.