Well, there are a couple of workarounds for this:

By doing this, the check is bypassed and the interface mapping object can be activated.

Convert the ReceiverDetermination interface into a synchronous interface

If for some reason you don’t feel comfortable circumventing the interface mapping check, an alternative option is to convert the ReceiverDetermination interface into a synchronous interface. But since the ReceiverDetermination object is a SAP delivered object within the SAP BASIS software component, we do not want to modify this object directly. Instead, we want to add it into our own software component and modify this instance of the object. This is done by making the SAP BASIS software component a dependent component via the Usage Dependencies feature. More info on setting up Usage Dependencies can found in this The specified item was not found. and on the SAP Help Portal.

Select Modify and then change the mode to synchronous. Since a synchronous interface requires an input message as well, you can reuse the Receivers message type used in the output message – it doesn’t really matter as long as some message type is used.

The object can be saved and activated at this point. Once saved, the modified version of the ReceiverDetermination object will have a symbol next to it indicated that it has been modified. 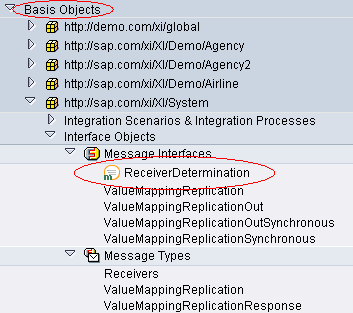 Now this modified version can be used in the interface mapping.  The remaining items in order to finish the enhanced receiver determination and scenario setup can be completed as normal.