Two Shots from the Past

As Mark Yolton pointed out in his SAP Community Network Reaches One Million Members! we have over a million members now in SDN and BPX Land. A good time to look back at the beginnings with two screen shots.

If you check the Internet Archive‘s Wayback Machine the first track of sdn.sap.com is this screen shot from July 12th 2003. We were totally closed back then, as we would only launch the site at TechEd in the fall.

Of course there was no Clubhouse, all we did at TechEd for most of the day was giving out SDN T-Shirts to everyone that let us scan their badge. Every night we would upload the scans and email the details to everyone on how to log in. 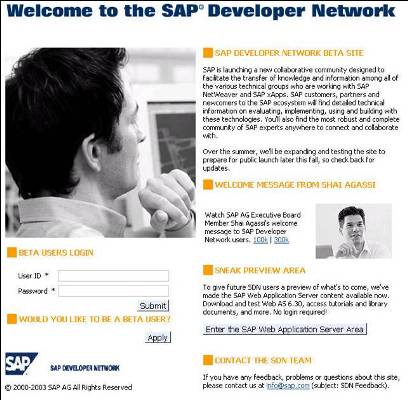 Starting at TechEd, you were able to create your own user. Back then most content was only available to you if you logged in. We had a lot of discussions around that theme and we switched to where 99% of the content that you want to consume here you don’t need to sign in, to participate of course you have to.

This second screenshot is a wiki page, internally we were using a wiki years before 2003 although not a very user friendly one. It is a status page of the different SDN forums from the end of 2003. Back then I had time to manually update that page. 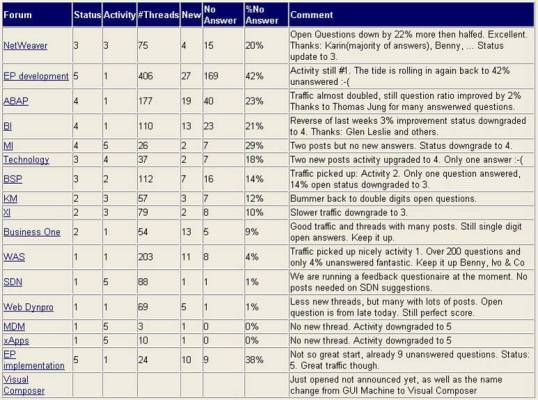 We had 17 forums and where still using the old SAP forum functionality, which to our defense was originally created just to have a threaded discussion at the end of a document. We really tried to twist it into a full forum, but quickly realized, that the functionality provided wasn’t enough. I think May 2004 we switched to the Jive forums and implemented the point system around this time too.

What makes us proud is that Jive forums are now an OEM solution in Netweaver, which shows the influence that SDN has on the SAP solution.

At the end of 2003 we had 120 forum threads, not per day, no per week. What was even worse is, that the percentage of answered questions was 42% in our most active forum 🙁

But there were already the first future Top Contributors at work: Thomas Jung in the ABAP forum and Karin Schattka and Benny Scheich-Lebek in the NetWeaver one.

In total we had about 1000 threads. Today 4 years and 2.5 million posts later, we are proud that our median time to first reply is below 20 minutes and that the percentage of open question (as in has not one answer) is in the single digits for most of our forums. Thank you all for keeping it lively and fun.