Yet another webdynpro (ABAP) se16 clone

Trying to understand how abap webdynpro works, i stumbled upon

about recreating transaction SE16 in a webdynpro application.I found it

very good, but as many step-by-step tutorials is too concerned with how

you do something than to explain why you are doing it.

So I tried to

get the same job done in a slightly different way,  both about the

coding and the comments on what’s going on.The main reason for which

good enough to explain it, but I hope it’ll be useful to other users

of the application described below is available as saplink  (http://code.google.com/p/saplink/) packages (see the readme file before importing, there are a couple of minor issues with saplink) on

, so here you’ll only find a few snippets.

MAIN and a webdynpro application with the same name. Of course the

applicartion will use the component I just created:

Not much to understand here, basically I only set a few names and descriptions.

If you have trouble importing the application slinkee, just copy whatr you see above and save it, it’s a pretty simple task.

The application has a single window with three views, with an interface that mimics the original SE16.

create the three views and leave them empty, with only the inbound and

outbound plugs required to manage a forward flow and backward one:

Then I set up the navigation path in the window: 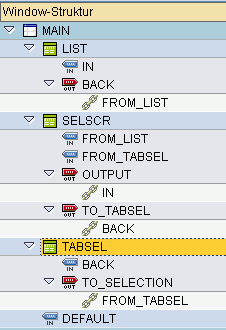 The default view is TABSEL.

), where the bold part is the name of the plug. Those methods could

have parameters too, but I don’t need any in this case because most of

the data is handled globally in the componentcontroller.

Every inbound plug has a handler method such as

HANDLEBACK, in which you could eventually add parameters like what you defined in the matching outbound plug(s).

this point I have a valid application, accessible through the URL shown

in the webdynpro application.Of course it still doesn’t do anything but

Before I start coding, in order to define language dependent texts I

have to define an helper class. To do so I simply enter the name of my

helper class ZCL_SE16_URB_ASSIST in the component header and let the

system authomatically create it when saving the modified

during the application startup and is accessible almost everywhere in

the component, so it acts a little like a global data and code

repository.Abuse of this feature may be very dangerous, an most

programming shortcuts, so I decided to only use it for messaging.

then added a public message manager attribute (MESSMAN), a method to

set it (DO_INIT), and another to show error messages using their

IDs.The latter is handy because the ‘some text'(T01) idiom doesn’t work

in a webdynpro environment, except in the helper class methods.

A little warning on the MESSMAN trick: I tested this on my system, but

I don’t really know what I’m doing: if the message manager can change

during a session it may be a BAD idea to store it in the helper class.

the job of DO_INIT in the constructor would be nicer, but I don’t think

it’s possible to get it there, let alone how to do it.

a reference of the context element. Used as a shortcut to move data

from SE16_PARMS to the context and back.Wouldn’t be needed if I could

figure out bind them together properly.

of type ZCL_SE16_CORE, which does most of the work. I described

technology.Later I’ll add a few methods to this controller to expose to the views the functionality provided by the attributes above.

helper class: this way I could use them directly from the views and

spare a few lines of code.While this approach wouldn’t hurt too much in

a toy application like this, it would be a terrible idea in the real

world, so I’ll try to behave like a nice guy and code as I’m expected

In a webdynpro component the data

is linked to the screen elements through the context.Every controller

has its context, and data shared between more than one view should be

put in the componentcontroller context.

In the global context I define a node PARMS with an attribute for every field in SE16_PARMS.

The next step is to use method WDDOINIT to bind attribute SE16_PARMS to the context:

*set up the message manager

“This will dump if the error occurred creating the message manager

As you can see from the code, I also initialize the message

manager I added to the helper class and then use it to report an error.

of all we copy and bind the context of the view with the global one. To

do so I simply open the context tab, drag node PARMS from the global

context to the local one and answer yes to the box below:

it’s time to actually draw the view, so I move to the layout tab and I

start dragging visual components in the screen area.Not much to say

here, the only interesting stuff is the tabname inputfield, with its

value property bound to TABNAME context element, and the execute

button’s action code, the other stuff is only there to improve the view

layout.Here you can see the layout tree and the properties of the 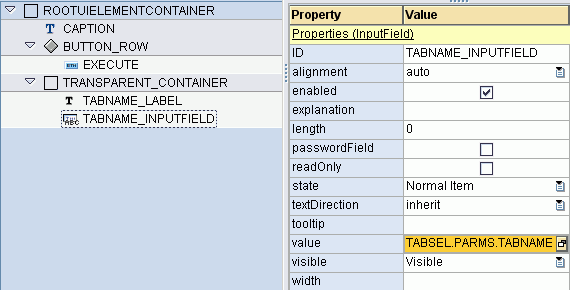 Here you can see the action method of the execute button, which is mostly a wrapper around a componentcontroller’s method:

Anyway it shows how to fire an outbound plug and how I use the helper class to display error messages.

For the next view (SELSCR) I need to use another webdynpro component, WDR_SELECT_OPTIONS.

so requires several tasks in different part of the application, the

component. I also add the SALV_WD_TABLE,needed in the last view.

First of all, I go to the properties tab and use the create button to add references to the component I just added: 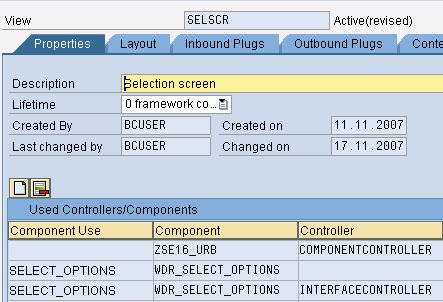 not done with this guy yet: as we’ll see it also needs some coding, a

VIEW_CONTAINER_UIELEMENT in this view and a setting in the window

structure to specify which component has to be embedded there.

I move to the view layout and design the screen.Some caption texts are

bound to context elements to display table name and description. The

last item we need is a VIEW_CONTAINER_UIELEMENT to put our select 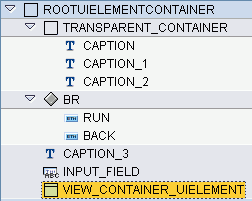 later I’ll move to the main window to embed the actual selection screen in this view container.

define two attributes for this view: SEL_HANDLER, a reference to

IF_WD_SELECT_OPTIONS used to create and manipulating the dynamic select

options, and OLDTABNAME, of type TABNAME, used to check wether we

should rebuild our select-options or not.

In the initialization method I’ll take care of initializing the component usage SEL_HANDLER:

*initialize a handler for select-options

I should  have added a little error handling here, but I was too lazy.

The only other significative methods are

HANDLEFROM_TABSEL and ONACTIONRUNQUERY, but they are only tiny wrappers for a few component controller methods described below.

perspective is the calls to the handler (a reference to

IF_WD_SELECT_OPTIONS) to clean and create the select options

dynamically.If the table hasn’t changed since the last time I ran this

method, no action is taken.

*loop to generate the select options

loop at wd_this->core->userfields into field.

The other interesting method handles the select options to the

selection screen, but has SALV_WD_TABLE as a component usage in place

of WDR_SELECT_OPTIONS and a component ALV_IF which is a reference to

ALV table screen in this view container, as shown below.<br /><br />Most of

on).For once doesn’t simply rely on the componentcontroller because it

has more to do with screen output that base logic, so I felt this was

* Retrieve data and put it into the dynamic context<br />

*Link the dynamic node to the ALV component<br />

containers. To do so I go to the main window structure and expand the

tree since I find the VIEW_CONTAINER_UIELEMENT items, then I select

‘Embed view’ from their context menu.In the last picture you can see

both the final window structure and the parameters I used to get it.