The first two blogs in this series introduced the new depreciation calculation (New DCP) for Asset Accounting in ERP 6.0 and then went into details on the fundamental change in how SAP calculates planned values.  This blog will cover another new item introduced in 6.0; time dependent depreciation parameters.

What are time dependent depreciation parameters?

Time dependent depreciation parameters refers to a series of fields on the Depreciation Areas tab of the asset master that can be maintained for specific time intervals.  These fields affect how the asset calculates depreciation.

What parameters can be changed?

The following fields are now maintainable on a period level:

Other fields in the depreciation area screen such as the Negative Values, Group Asset, or Changeover Year are not maintainable on a period interval basis.  These continue to operate as they did in prior releases which means that they are in effect for the life of the asset.  Any changes to their values will result in a recalculation of the asset’s value including prior periods (which may have already posted to the G/L).

Yes, but this is completely different.  So as not to confuse anyone, this new functionality is separate from the time dependent data that already exists on the fixed asset master record.  The asset data stored in table ANLZ which maintains the asset’s point in time assignment to a cost center, plant, tax jurisdiction code, fund, WBS element, shutdown interval, etc. has not changed.  The information in this blog is about time dependent depreciation parameters which is completely different.

Why is this important?

As mentioned above, the fields on the Depreciation Area tab of the asset master used to be in effect for the life of the asset.  This meant that it was not possible to specify depreciation key XXXX for a certain time frame and then use key YYYY for another.  Once you switched to key YYYY, the asset’s depreciation values were recalculated as if YYYY had been in effect since the asset was originally capitalized.  This was not consistent with US GAAP (maybe some other countries as well) and made it very hard to implement a “go forward” calculation.

Prior to making the change, the Posted Values display on the Asset Explorer shows the breakdown of the monthly depreciation amounts as shown below.  The $2,000 represents the initial calculated amount based on the initial $120,000 acquisition.  The drop to $1,500 in period 4 represents the partial retirement of $30,000.  This will serve as our “before” image of the calculation. 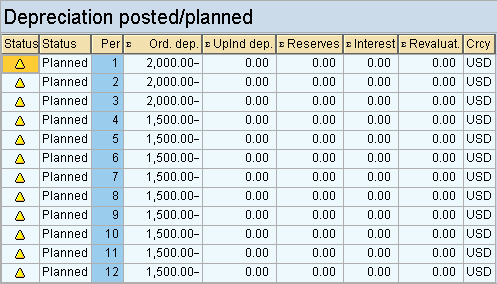 As of October 1st, it is determined that the asset should now depreciate over a total of 10 years instead of 5.  This change in depreciation should not affect the prior month’s calculation and should only be used on a go forward basis.

If this change would have been made in a prior ERP release, the useful life (UL) would be in effect for the entire annual calculation.  This would result in a change in the planned amounts for periods 1-12 of this year as well as all future years.  But in this example we want periods 1-9 to stay “as is”.  The change in UL should only effect the calculation from period 10 onwards and leave periods 1-9 with their current calculated amounts of $2,000 and $1,500.

Here is what the calculation looks like if it were made using the old depreciation calculation.  The doubling of the UL has caused a consistent 50% reduction in the planned amounts for all periods (again, whether or not the period has been posted to the G/L is not relevant).  This is not the desired outcome. 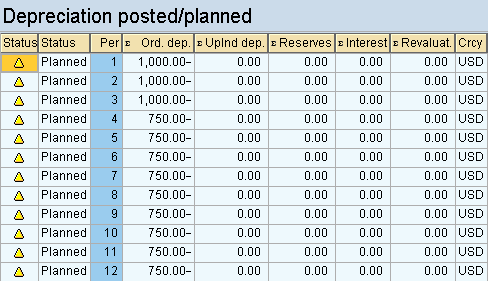 To make the UL change you have to access the detail depreciation area screen for the asset.  Notice the More Intervals button at the bottom of the image below. 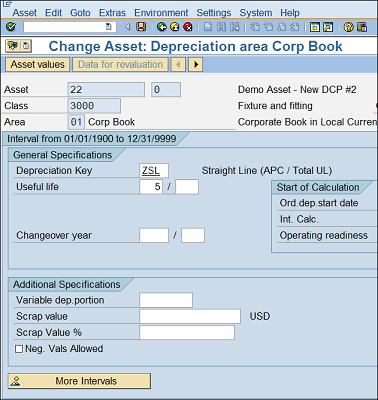 After pressing the More Intervals button, the following prompt appears requesting the start date of the new interval.

Once the interval has been specified, the new UL can be entered. 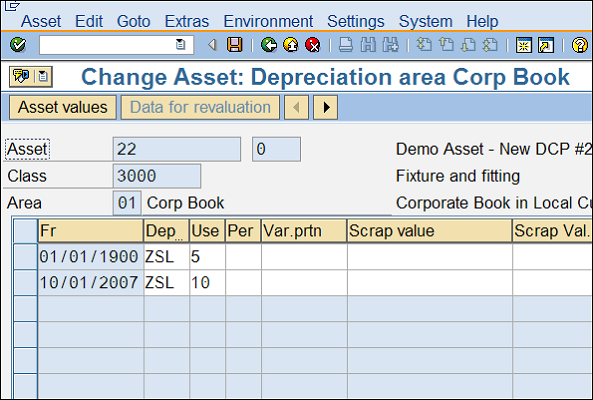 By looking at the asset’s values you can see that the ordinary depreciation for the fiscal year has been reduced from $19,500 to $17,250 because the change in UL spreads out the amount to be depreciated over a longer time period.  In addition to changing the period breakdown of the calculation, this has resulted in a different annual depreciation amount between the Old and New DCP techniques.  Using the previous calculation prior to 6.0, the annual planned depreciation amount would be $9,750…  this is not correct for this scenario. 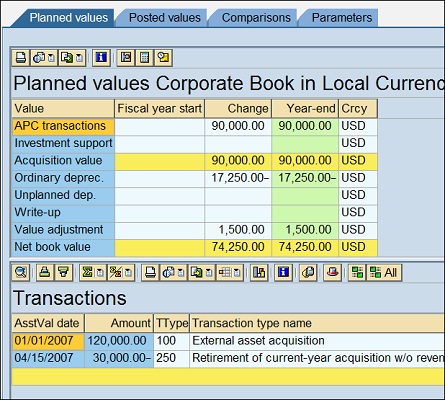 Displaying the depreciation calculation reveals that a new period interval has been created.  Note that the period factor has changed so that the 3rd interval is only in effect for 3 periods (.25) and that the rate has been reduced from 20% to 10%.  This shows that the change in UL did not affect all of 2007 but only affects periods 10-12.  The previous interval has also been reduced from .75 to just .50 . 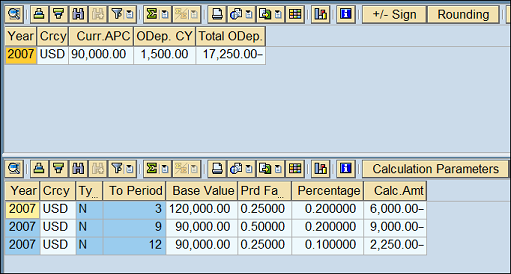 For moredetail you can see how the $2,250 of calculated planned depreciation is allocated for this 3rd interval.  As expected, the planned amounts of $2,000 and $1,500 for periods 1-9 are not changed and the doubling of the UL has resulted in a 50% reduction in the planned amount that was valid at that point in time. 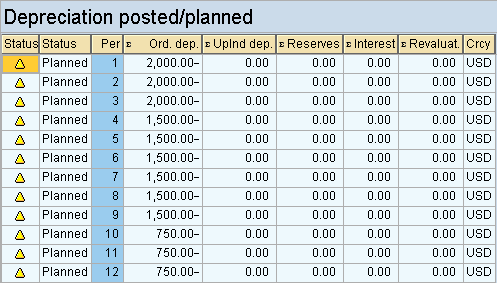 I have one more blog in mind for the New DCP related to the Asset Explorer.