How to Measure Operations on Internal Tables

The efficient handling of internal tables is one of the most important performance factors in ABAP programs. Therefore it is essential to know the runtime behavior of internal table statements. This blog describes how to measure operations on internal tables and how to ensure that the measurement results are reliable.

In ABAP, there are three table types: standard table, sorted table and hashed table; and two main types of accesses, read with index and read with key (which has some subtypes).

The expectations on table types and access regarding performance are the following:

This blog has two goals:

In a previous blog (Runtimes of  Reads and Loops on Internal Tables) the exact measurement results for several reads from internal tables have been shown.

One might assume that in principle the measurement of a READ from an internal table is very simple. You simply use the ABAP command ‘GET RUN TIME’ as

It is absolutely essential that the measurement does not contain operations other than the one you want to measure. This is really obvious but still often overlooked. Additionally, you will soon recognize that the results of such simple measurements show huge variation and do not match the expected behavior.

The following program has all the ingredients to measure internal table operations in a reliable way.

The explanation of the parameters, their effect and their proper setting are discussed step-by-step below.

3. The Effect of the Parameters

3.a. Variation of the Size n_max

The runtime of an operation on an internal table depends on the number of lines in the table, the machine power, the table width and other factors. So, if we measure only for one fixed table of the size n, for example n = 1000, then we do not learn much. We are mainly interested in the dependence of the runtime on the size of the internal table n, as all other parameters should not change. Therefore a variation of n is included in the test program.

The effect can be seen by running the test program with n_max = 10, pre-read off, i_max = 1, s_max = 1, l_max = 1, i.e. in default setting. For simplicity, 10 values have been predefined to cover the range from 10 to 10.000. Execute the tests several times to check whether this setting leads already to reliable data or not. The results are shown as black lines in figures 1 and 2. It is obvious that there is a lot of variation between the measurements. Also, the dependence on the table size is far from what we expect. So before we draw wrong conclusions, let us check whether the measurement can be improved any further.

3.b. Pre-read Cost of Initial Reads

The strangest effect in these first measurements is the rather strong increase of the runtime with the number lines in the table: for the hashed table we expect no increase, and for the sorted table maybe a small increase. It seems that a first read needs much more time than the subsequent ones, which are therefore a better measure for our needs. For this reason a pre-read was added, i.e. 20 reads on the table were executed before the actual measurement is done.

The effect can be seen by running the test program with n_max = 10, pre-read on, i_max = 1, s_max = 1, l_max = 1. The results are shown as orange lines in figures 1 and 2. The result is much smaller than the result of the first test, but there is still a lot of variation between the measurements.

The measurements are now in the range of a few microseconds and therefore extremely close to the time resolution of the GET RUN TIME, which is one micro-second. So measuring one execution is not reliable, the operation must be repeated several times to get runtimes in the ranges of 50 or more microseconds. This can be done by adding a DO … ENDDO. The cost of the empty DO … ENDDO must be deduced from the measurement.

This can be done by running the test program with n_max = 10, pre-read on, i_max = 1000, s_max = 1, l_max = 1. Note, i_max was increased until the results did change no longer. The results are shown the figures 1 and 2 as green lines. The result is much smaller than the previous results therefore the detail view was added. There is still a bit of variation in the results.

To reduce the variation of the results even further, it helps to the repeat the measurements several times and calculate the average. It can be assumed that the variations are caused by some uncontrollable effects, which should have only a negative impact. i.e. they can make the execution slower but not faster. Therefore we do not average over the different executions but use the fastest execution out of several measurements.

It is obvious that an operation like the sequential read, which scans the table from start to end, will find an entry at the beginning faster than one at the end. In this case it is also obvious that the runtime for an entry in the middle of the table is equal to the averaged runtime. However, in the case of a read facilitating a binary search, it is not clear which line would represent the averaged runtime. In general it is much better to execute the average over the runtimes of several reads accessing different parts of the table.

This can be done by running the test program with l_max larger than 1, i.e. with n_max = 10, pre-read on, i_max = 1000, s_max = 20 and l_max = 20. The program accesses l_max different lines equidistantly distributed over the whole table. The results are shown in the figures 1 and 2 as red lines. These are the best results and do resemble our expectations quite well. 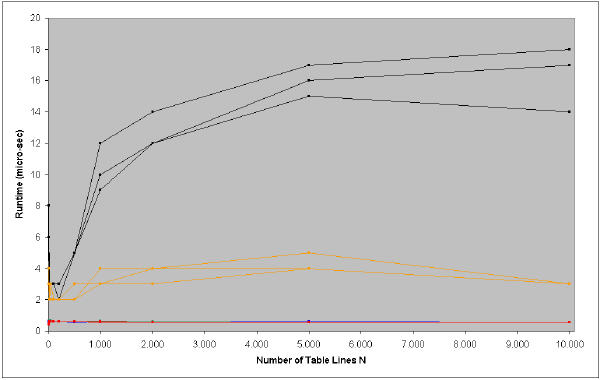 Measuring operations on internal tables in principle seems very simple. However, to get really reliable data bit more effort must be put into the measurement. How it should be done was discussed here. 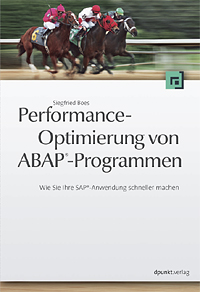 Former Member
November 9, 2007 at 2:28 am
Very good posts, both this and the previous one you linked to.
I have one doubt, that maybe was answered somewhere else by you already: why did you prefer to use GET RUN TIME in the code, instead of measuring with SE30? Was it not reliable?

Siegfried Boes
Blog Post Author
November 9, 2007 at 3:31 am
Thank you for your interest, I took the GET RUNTIME for 2 reasons:
+ the SE30 has more overhead than the GET RUNTIME
+ and for usability, how should I extract the results of the different measurements from the SE30 and display it in the result list?

Your blogs are extremely useful, Thank you very much for the clear explanations.