Using SAP Gui for Java on Mac for development

10 0 2,803
To set the record straight, I have to say I had been warned a lot against choosing the Mac platform because of the lacking platform support from SAP. I my opinion, the Mac is a superior platform in every way, and since it can run a virtualised MS Windows installation simultaneously by the help from VMWare, I decided that lacking support from SAP was not going to prevent me from using the best platform ever.

My need for SAP Gui is modest so to say. I primarily do Web Dynpro Java development and hence does not need to use the SAP Gui for much other than fetching RFC and BAPI specs and of course the occasional test drive of the two. Transactions SE37 and BAPI work terrific in SAP Gui for Java. In fact I’ll rather use the Java version as it seems a little faster than the WinGUI.

One exception is when I’m developing Web Dynpro ABAP (WD4A). The I of course use the gui a bit more intensive. I have recently discovered that there are some minor glitches in the Java gui regarding the WD4A extension to SE80. These glitches is mostly regarding context menus and the initial layout of property inspectors and tables. This of course  can related to the fact I’ve set Safari as the default browser and Safari isn’t supported by the Web Dynpro framework.

Seriously, installing the SAP Gui for Java is a breeze. I went to the SWDC and downloaded a installer packed as a jar file. Once downloaded I ran the installer and it created a Mac-ified application which integrates with the Mac OS X just perfectly.

And then the problems started to kick in, not that there is anything wrong with the software, it just appears that I don’t know how to configure it. Things work a little different than in the WinGui. Here is hvat you need to do:

After installing Gui for Java, run it and click the New button. It should look something like this: 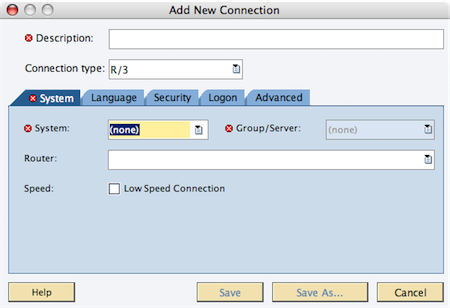 Click the advanced tab and check the check-box saying user expert…. and write a connection string in the textarea like what I’ve done below. Remember to substitute what is between the<and > with something from reality. 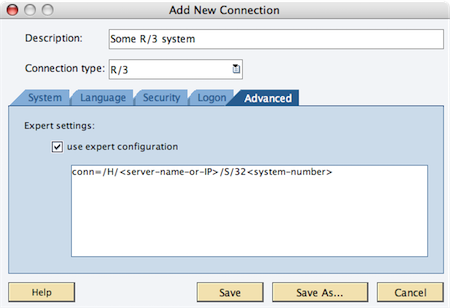 After this I was able to connect just perfectly.

When running the Java version of Gui, you won’t be able to use the new ABAP code editor with code-completion and syntax highlighting. I don’t see this as a loss as the ABAP code completion doesn’t really complete anything for me, and the syntax highlighting almost none existent when compared to Eclipse in which i used to work. I recognise the fact that a lot of ABAP’ers love and cherish the new features, so if you’re a highlighting completion lover, stay clear of Java GUI 🙂 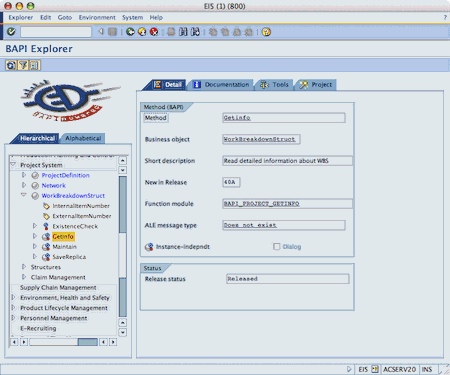 As stated earlier, the BAPI transaction works beautifully. I only use it to read documentation and as a shortcut helper to the function builder where I can perform tests. This is also the intended usage I guess. 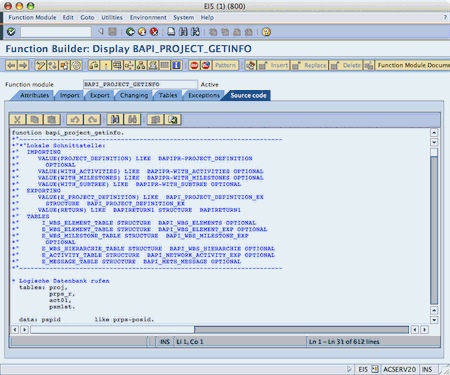 This describes the most common problem with Gui for Java. All properties sections are totally collapsed by default and their state gets reset every time the window is re-painted. Very annoying. 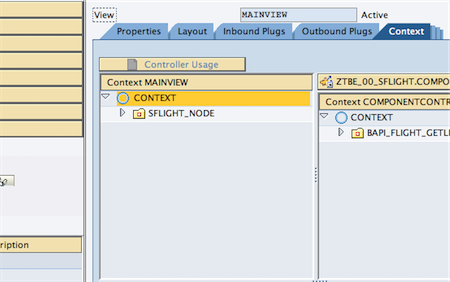 If you were to right click the context node in the views context, you might expect to se a context menu giving you the relevant context manipulation choices. However this is not the case as nothing shows up! This is a complete show stopper as there is no other way to get to these functions.

There is still a way to go for SAP before they have a working client on other platforms than Windows, or at least one that can be used for development. Perhaps SAP should make a native client for Mac as well? And what about the Linux user, I quess they’re left out in the cold as well.

I must admint I know nothing af the Screen Painter. I'm not an hard core ABAP developer, only  Web Dynpro and FC's.
But if you really want to put some efford into getting the GUI to work on Linux, you could try to install the windows version through WINE (http://www.winehq.org/) or Crossover Office (http://www.codeweavers.com/).
If you try, please let us know about the results.

Hans Derycke
October 29, 2007 at 10:57 am
The graphical screen painter is indeed not supported in SAPGUI for Java. Instead, you get to take a trip down memory lane with the "classic" screen painter.

Former Member
October 30, 2007 at 8:09 am
I too am a Mac junkie and have been running SAP GUI for Java on my Macbook for a while now with few issues at all.

SAP used to have a native Mac client (I'm thinking at least 8 years back).  But we will never see another one.  It's all Windows or Java.  There just isn't enough customer demand to warrant dedicating development for such a small niche.  Especially when the majority of functionality is achieved with the Java GUI.

I'm in the process of installing a NW instance on my Macbook in a VMWare Solaris session.  Maybe that'll be a good blog to write...

Former Member
February 21, 2008 at 11:08 am
Java have so many tools for development ? why SAP don`t use it ? Like Eclipse RPC Editor http://www.eclipse.org/eclipse/platform-text/development/rcp/examples/index.html or Visual Editor http://www-128.ibm.com/developerworks/library/os-ecvisual/

Other Tool with same problem is NetWeaver Workbench, even based in eclipse is only avaliable over M$ Windows

Please, think in java ! think cross-plataform ! Not for Windows or Mac, but for Linux, BSD, Solaris, etc too.
Put the Eclipse EDITOR(or liked) in SAPGUI even in SAPGUI For Windows, don`t let us need emulate it !!

Former Member
February 26, 2008 at 11:50 am
Well, i have searched in SDN, SMP, etc and found nothing of SAP iniciative about this, only found this post.

Lets wait and hope not be the same tool, or not come only for Windows like SAP NetWeaver Workbench.