The PICTURE Project – Introduction and Approach

0 0 82
Welcome to the PICTURE Blog in the Public Sector BPX community at SDN!

In this blog we publish – in loose sequence – information about the PICTURE project which is a research project funded by the European Commission under the 6th Framework Program. The project has started in February 2006 and will run for three years until January 2009. The PICTURE consortium comprises 12 partners from 6 European countries and is led by SAP:

PICTURE aims at exploiting the large potential for modernizing European Public Administrations (PAs) that lies in process reorganization with Information and Communication Technology (ICT). Municipal administrations often find it difficult to exploit this innovation potential because decision makers hesitate to invest in process reorganization projects and ICT infrastructure. This is largely due to the fact that the potential impact is usually unclear and hence large investments cannot be justified to the political leadership and the public. The result is that PAs focus on the optimization of single processes without leveraging the impact an investment can have on other processes in the PA.

The underlying conceptual approach of PICTURE comprises the following steps and is illustrated in the figure below. 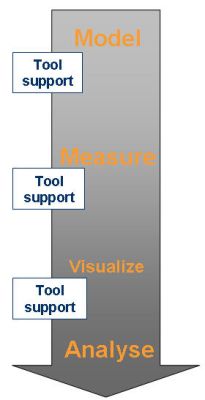 An example for applying the PICTURE approach is illustrated in the following figure (Please note that this is an artificial example and does not represent any real process. Any similarities are by coincidence): 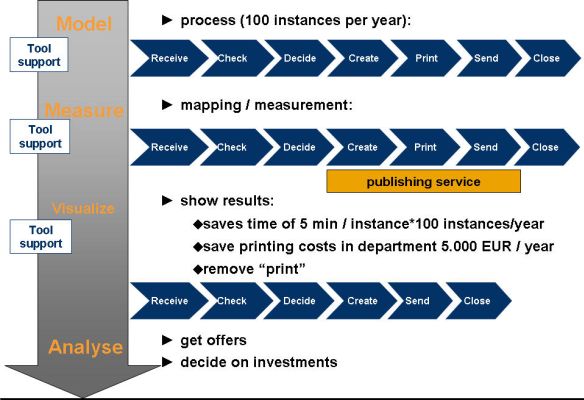 The PICTURE consortium is continuously disseminating the results of the project on scientific conferences as well as in events targeted at public administrations. For the latter audience PICTURE has been presented at the following major events (for a complete list see the PICTURE website at http://www.picture-eu.org/):

Also a dedicated PICTURE workshop was organized in March 2007 in five locations in the partner countries. The locations were connected via videoconference for a common part in which the project was presented. Then each location discussed PICTURE specific topics in their local break-out session.

This event will be repeated in a similar setup during November and December 2007. If you are interested to participate in one of the local sessions, please contact us and we will send you an invitation.