A Caveat: Ok. I know that Enterprise SOA  is more complex than just the focus on processes. I agree.  But the idea of the process plays a central role in this concept.  Furthermore, I thought that the title “E2E” was a cool one….

Now, before you start to say – “What is he talking about? These are two entirely different cups of tea”, let me say that I not saying that you can replace an ERP or CRM system with a wiki. These are two different types of Enterprise applications and the wiki will never replace an ERP system.  Both types of applications have their uses. The question is where is it possible to Web 2.0 technology to achieve Enterprise goals? How do the types of application complement each other?

A caveat: We must distinguish between the direct and indirect usage of E2.0 technologies in processes. “Indirect” refers to the fact that E2.0 technologies (for example, blogs which describe certain products – either in a positive or negative way, user review sites, comparison shopping sites such as Froogle)  are influencing how corporations in general – including their processes- respond to their customers.  “Direct” refers to the situation in which these technologies are embedded in corporate processes themselves.  This blog focuses on the “direct usage” scenario.

In my last blog, I discussed the typical characteristics of projects (structure, milestones and fixed responsibilities). In some ways, a process is an instantiation of a project in that it also has the same characteristics.  For example, a HR process dealing the famous vacation request process follows a certain pattern, involves certain roles and has clear responsibility for the involved tasks. I don’t think anyone questions these basic characteristics.  If someone decides that my vacation request does not get approved then I want to know who made this decision and perhaps why this decision was made.

Each process instance has a certain status (on-going, finished, just started, …) which is more less linked to a particular manifestation of the steps involved.  This suggests that once a step is finished that the following step becomes active and must now be accomplished. In a wiki, there is an entirely different metaphor at work.  Wiki pages continually change as more people change the content.  If a wiki page was part of a process, when would it’s status change to “completed” , so that the next process could be initiated.  Furthermore, who decides in such a collaborative effort that a wiki page is finished? One individual who monitors the content development. Or perhaps, a particular version of a wiki page could be frozen and determined to “finished” (what about a wiki plug-in for the SAP NetWeaver Development Infrastructure NWDI)? What happens then as the process continues as does the development of the wiki page?

In the abstract sense, many process steps deal with decision-making. One question might be whether E2.0 tools provide the ability to really make decisions about particular events. Andrew McAfee discusses this distinction in a blog “Input by Many, Decisions by ????“.

We now have novel and powerful technologies for aggregating formerly dispersed knowledge and tapping into the wisdom of crowds. I agree with Surowiecki that these tools are currently underexplored within companies, and much of my teaching and writing at present aims to show business leaders new opportunities and encourage experimentation.

But I don’t think I’ve ever said “turn over as many decision rights as possible to the crowd assembled by Enterprise 2.0 technologies.” This would be extraordinarily rash advice. There are many good reasons to assign important decision rights clearly and cleanly to individuals within companies, and we should proceed very carefully indeed before we move away from this practice.

Of course, it is possible to say that the all those involved in the wiki make a collective decision about the content on a particular page.  Each individual has the right to change (which might not be equal to “improve”) the contents of a wiki page. Thus, the page evolves and is (or can be) the product of those collaborating. How could this possibly work in a process?

This isn’t to say that a wiki might not be present in a process. I could imagine a scenario with a process dealing with product improvements. The idea is that a company wishes to improve certain processes that involve the interaction between external customers and internal business units (call centers, help desks, etc. (See the Community Project for more details). The wiki could be used to collect the requirements of those interested or involved. At some point, maybe based on a certain deadline, the contents of the wiki is transferred to the next step of the process where the initial collaborative effort is transferred into some product management system for further processing.   The ability to move wiki content into other forms (perhaps more appropriate to ERP and Enterprise SOA-based systems) depends on how the wikis are structured /formatted and what conversion tools will be available in the future.

A Note: Currently, the one pilot in the Community Pilot is using scripts to capture the interaction of individuals who work in a traditional manner (for example using IM). They use whiteboards and following certain methodologies. As I suggested above, a project and a process have certain similar characteristics. What if the characters in a script used the wiki as a means to conduct a certain process/project step (For example, the definition of the process requirements)? We could describe how these fictitious individuals collaborate via the wiki to describe the process. Sort of a wiki in a wiki. We could create a fictitious wiki where these fictitious characters collaborate. This might provide initial results on the use of wikis in processes….

It is also possible to use existing Composition Environment (CE) technology – primarily using Guided Procedures and the basic Web Page Callable Object – in order to embed E2.0 technologies into processes.

But this use actually fails to deal with the new possibilities of the new technologies as well as avoiding the challenges that result from their usage. For example, since the creation of a wiki is a collective activity which user is assigned the task of changing the wiki? How is it limited to one page? Including a wiki page is sort of like including anentire WinWord document in a process step.  Based on the existing process metaphor, the use of the wiki in this manner doesn’t seem appropriate and really doesn’t use the full potential of this technology.

Another possibility might be to use these E2.0 technologies to support process instead of active participation in these processes. I could imagine that the ability of an employee to understand a process might be improved if, based on a particular step, he could read blogs on the topic or look at the corporate wiki that describes how others experienced this particular process task.

Since most E2.0 technologies are Web-based, it would be easy to embed this content to “support” existing processes. In Guided Procedures, there is the ability to have such supporting objects for actions via the technology called Info Callable Objects which can be called during runtime for delivering useful additional data, like reports, user data, etc. The screen shot below shows an example of embedding these E2.0 technologies in a process. 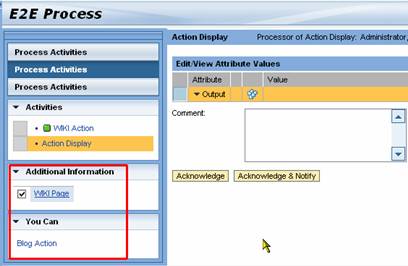 In my opinion, the use of E2.0 technologies as process support is inappropriate and should not be used.

We must distance ourselves from the idea that every process step must be the under control of one individual. Some process steps are based on the collective intelligence of those involved. This might actually help such decisions be more acceptable to those involved. The selection of these process steps will be the challenge.  E2.0 tools are based on the idea of empowering users which threatens the power of corporate institutions.

The question isn’t how we can change existing processes to use these tools. Rather how we are to expand the traditional definition of the “process” to embrace these new powerful tools and the philosophy on which they are based. .Once this decision is made, then the E2.0 technology must be adapted to fit this new environment.

I assume that changes in the corporate world as well as future technological developments (for example, dealing with implementation, modeling, monitoring,  etc) will be necessary to fully achieve the goal of empowering users – not only when they interact with others regarding the selection of a new car (for example in a social network outside of work) but also when they interact with customers in a business setting (for example defining the requirements for a new product that is not restricted to being behind the firewall but evolving across the firewall.) I think it is correct to assume that some point this artificial separation will also disappear.

Very nice blog -:) I'm actually very interested in BPX and ESOA...So your blogs are a great source of value to me -;)

I talked with Marco ten Vaanholt about it...So you can expect some BPX stuff from me in the couple of months -:) (Must read a lot before I can post my first BPX blog)...

Marilyn Pratt
October 12, 2007 at 8:26 am
"What if the characters in a script used the wiki as a means to conduct a certain process/project step ... We could describe how these fictitious individuals collaborate via the wiki to describe the process. Sort of a wiki in a wiki. We could create a fictitious wiki where these fictitious characters collaborate. This might provide initial results on the use of wikis in processes.... "
Actually that is some of the potential I saw a few years back in "Second Life".  The fictitious story becomes a game environment in which to virtualize or simulate an activity.  We know that simulations enhance skills in areas as important and complex as medical surgery or even defense logistics. Gaming/simulations can mitigate risk and lose and damage.  Why not in a business perspective?  Think "Monopoly" on steriods.  Very thought provoking stuff here.   Can't wait to continue in the clubhouse in Munich.  See you there.

Former Member
October 12, 2007 at 10:16 am
"In my opinion, the use of E2.0 technologies as process support is inappropriate and should not be used."

I don´t actually agree with your opinion. I believe that WIKIs and other collaborative tools could benefit users in many ways. For example, WIKI could support new users of an ERP system to reduce the efforts of learning the actions they have to take in a certain process step. The content of this WIKI page could be created/edited by more experienced users. Another usage could be a "whiteboard" for distributed companies to share ideas between employees from different locations.

I believe that many companies, large ones in particular, could take advantage of these web 2.0 tools. But by no means, they can replace ERP, CRM, etc. with them.

OK.... Maybe my comment regarding the process support was little bit one-sided.  I just feel that these technologies have the capability to do so much more than just provide support.  If they are restricted to this secondary role in processes, their innate potential - which I think is enormous - really cannot be used.

Regarding your idea of the whiteboard: I agree completely. The question is this a case of process support or rather a step in a process concerning process or product improvement. The critical step involves moving the information that origiantes in this E2.0 contexts into current "typical" (GP, etc.) process environments.