TechEd and the Subscriptions booth

TechEd Las Vegas is over, and as you can see, I haven’t won a dime or at least a fortune that would let me retire early. That’s why I am going to tell you what I did for my salary in Las Vegas. We were in the Community Clubhouse with a booth for the SDN Subscriptions program and got quite some interest.

Though originally there were some people, who misunderstood the message “SDN Subscriptions are here” and thought they’d have to pay now for the SDN, at our booth we (Izzy, Shay, Amir, Philipp and me) quickly were able to correct this. The majority of the SDN – read: articles, blogs, forum posts, eLearning etc. – are still for free. Everything that was free – remains free. 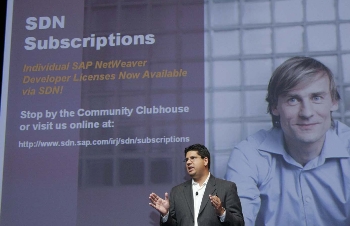 SDN Subscriptions means that through the SDN individuals can get full access to the SAP NetWeaver stack for testing, evaluating and developing. While this is nothing new for larger organizations, who had been buying the developer licenses through the regular license program, SDN Subscriptions are something new: we are offering individual licenses for freelancers, independent consultants, “one-developer-shops” and everybody who is interested to lay hands on NetWeaver.

What you couldn’t do up to now

Up to now, if you’re profile matched one of these role descriptions, it was difficult to get your hands on some of the components of NetWeaver. Though there are trial and sneak preview versions out there, some components like XI/PI, MDM or BI never were availaible for trial downloads on SDN, except parts of the overall solution. These preview versions are not identical to the actual GA software and have limited life span after which you need to reinstall.

Although many freelancers or independend consultants got access through the development licenses of their customers to those systems, often the kind of things they were allowed to do or test in those systems was limited. Take configuration, for example. Or using a different database or OS under the system.

And just forget about upgrades of trial systems and sneak preview versions. You were not allowed to do so, and that’s quite an important aspect of the skills of an SAP consultant.

Equally important, there was no easy way for you to keep your code in a system. If you were using a trial version, the system access expired after a couple of weeks. And if it was done in a customer system, your user usually “expired” after the end of the project.

What you can do now

Now with the SDN Subscriptions, you can have your very own systems to play around with, as well as do serious development. How “serious” demonstrates an important goodie: you have now the option to apply for your very own ABAP-namespace.

Get first hands experience on XI/PI, MDM and BI.

See also the benefits if you plan to take SAP Education classes and do personal certification. With a system at hand, where you can really prepare yourself for the next level of professional skills in certification, it is much easier to get past the tests and indulge in the knowledge.

Go through the full installation process of the NetWeaver stack on multiple platforms and databases. Gather this experience and be ready when your customer needs that knowledge.

“Mess up” – I mean – configure and reconfigure your very own installation without endangering your customers system and trust.

Other things you can do

Though you have only one development user, you still can create multiple concurrent users for testing purposes.

Having said all that, I don’t want to hear those types of questions at the TechEd in Munich anymore 😉

So check out the SAP NetWeaver, Development Subscription under  http://www.sdn.sap.com/irj/sdn/subscriptions/development
And don’t forget to tell us what you think through that feedback form.

Very nice -:) Now I know what I'm going to be able to do when SDN Subscriptions came to Perú on 2020 LOL Ok...I hope it doesn't take that longer...Still, I'm really happy about the people who could subscribe right now -:) Don't miss this awesome chance!

Venkata Ramisetti
October 12, 2007 at 3:59 am
"As long as your subscription is current, you are entitled to access any new version of NetWeaver." What do you mean by this? So Can I still able to access the purchased NetWeaver software even after one year subscription expiration? Could you please correct me if I am wrong?

Former Member
Blog Post Author
October 12, 2007 at 6:13 am
It means: as long as you are subscribed, you get access to the newest NW stack. If you do not continue the subscription, then you are not allowed to use the software anymore.

Former Member
Blog Post Author
October 22, 2007 at 6:20 am
You can. As I wrote in the blog, we host a Solution Manager for you, which allows you to not only get the license keys, but also access to the Support Packages and Patches.

Device Management IS
October 27, 2007 at 5:36 am
So this means I can develop my own product on this software and then via the use of transports provide this to paying customers?

Former Member
Blog Post Author
October 27, 2007 at 9:46 am
In order to sell your application, you need a separate license. We are currently working on including that into the SDN NW subscription.

Device Management IS
November 8, 2007 at 1:27 pm
Thanks Mario. Any ideas when that will be available?

One fyi for people ordering it- your one year starts the day you receive the package(?) not when you install it and start using it. So, if you are ordering it, better to have your hardware etc ready beforehand.

Former Member
November 14, 2007 at 8:33 am
From the very beginning, it was stated you could build applications - assumption being you could then sell it (check the earliest blogs announcing benefits of this program). Now, the subscription is for one year which is counting down for people who have purchased it but we don't have a date when this will be part of subcriptions.

Doesn't seem fair to me, not at all.

I had the opportunity to talk to you in person in Vegas, but I would like to leave my impressions documented here.

As you know, I have been actively asking for a subscription program like this for a while (I remember my first SAPTechEd). I got excited when the program came out. But I have to be honest, I got disappointed with this first version.... Here is why:
1 - The price is right, but only considering the premium access zone. Since we were at the SAPTechEd, we have that already. The subscription has no "discounted" price for SAPTechEd participants. This means we pay for the Premium Access Zone TWICE;
2 - We DON'T GET much more than what we already get from the SDN community itself. The vast majority of us are ABAP developers, we can get an ABAP stack from the SDN that will be very similar to what is in the package. I know it is cool to have it all (instead of pieces like SDN sneak peak versions) but it doesn't cut for me.
3 - Maybe the most important reason. WHERE IS THE ERP!!!!!! Again, the vast majority of us work with ABAP and leveraging SAP solutions (complementing it, enhancing it, interfacing with). Having another BASIS system only is not enough. We should have access to the ERP modules. That is what I've been asking about. Lots of us would like to have an opportunity to store our developments in our own system to demo and prototyping. You can't do that in this system, unless your solution is 100% apart from the ERP itself (what almost never happens);

See, I am still excited about the program but it is not for me yet; I will wait for the next version of it.

Former Member
November 14, 2007 at 8:30 am
The Package doesn't tell how to get the hosted solution manager key when installing. No instructions mentioned anywhere, how is one supposed to figure that out?

Former Member
Blog Post Author
November 14, 2007 at 11:25 pm
You find this information in the FAQ on the subscriptions page.