Breakfast with Blag and with Shelly – very nice, as Blag commented back to me.

Hands on session (so to speak) with Dieter K and Tim Higley.

Possible webcast/session on system availability & performance metrics; the wheels have begun to grind.

Why not have one base?

The business card SDN allows one to display can show a picture; that picture is different than the one on the blog section, and different yet again from the wiki picture.  This is a metaphor for the question Gretchen raised in the TechEd keynote address, which was how to control the myriad of underlying security systems in an ever-growing SAP landscape.  If SAP itself has the same issues with its premier customer facing application, how do the rest of us handle it? 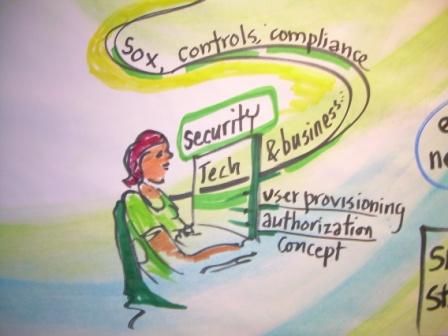 Mark Yolton revealed to me that SAP is using conference badge stick-on ribbons with different colors and different messages as they saw how successful ASUG uses them to help attendees identify their peers, subject matter experts and chapter colleagues (i.e., physical neighbors).  I’ll propose that ASUG.COM and SDN/BPX build a merged set of these for virtual identification.  A good place for this might be on the business card [e.g, “I Wiki”]

Self Identity feeds into brand allegiance (think of those pervasive Wal*Mart smiley face stickers given to children).

My bag?  Up until Tuesday (10/2) I was sporting a TechEd 99 bag.  Given the cool factor of a Timbuktu logoed SAP Mentor brand identity, it didn’t take much for me to switch.  The learning curve of “where’s my stuff” has been mercifully short. 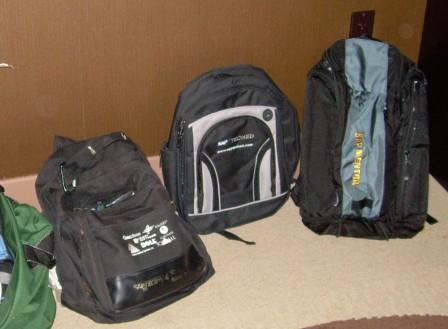 My hat (digression starting with Monty Python, going through Douglas Adams the plytmath and ending up with a set of logo hats I wear)?

Now I’ve got an SAP mentor hat, and wearing it.

Butch McNally at Las Vegas airport – he missed the Community Day as he attended the Portals half-day session.

Butch didn’t get mentorized, as I dropped the connection point I could have made.  But he wants the recognition, and has earned it. 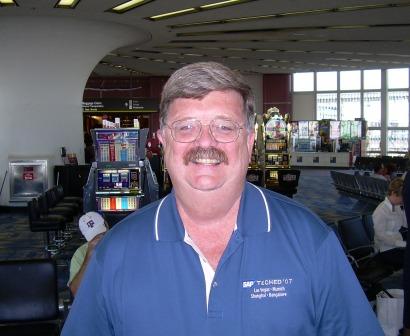 Random thoughts back on the conference:

Sat with Ron Peebles, Chris Hanshew, Georg Fischer, Ken Campbell and Irene Hopf at the breakfast table.  Ron hadn’t seen me for a few years, so when I re-introduced myself his statement was “Oh, you’re that Jim.”  Made my day, as did Chris’s revelation of SCOV, all before 7:30 AM.

Had a 10-second howdy with Tami Morrison of the Benchmarking Performance and Scalability team.

ASUG BITI volunteers get on the board in the Community Clubhouse 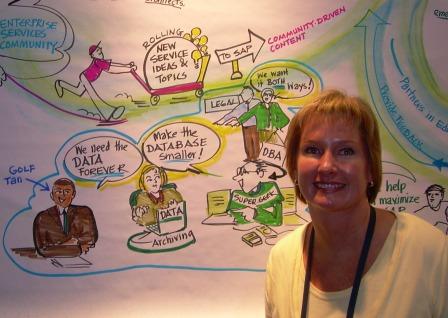 The only person on my list of people to meet this week was Evan Stoddard, of the Solution Manager team, which seems appropriate as our Solution Manager system hasn’t given us a lot of return on the investment so far.

Met Michael Wang of Oracle Corporation, who has assisted us with several mission critical escalations in years past, as he works on the SAP support queue for database specific issues.  It’s always good to meet folks like this face to face, so that later remote contacts can be more effective.

I introduced one of the Black & Decker attendees to the team at the PBS booth, so he got a 5 minute explanation of how archiving and SAP works

Landing outside the Las Vegas NV Zone of Influence

[All I Need to Know I Learned in Kindergarden]
[Any questions? – what isthe meaning of life?]

I thought I read about “Gusty Winds May Exist” in one of Robert Fulghum’s book, but I found the comment today in a Douglas Adams essay

“… the best thing is just to mention a traffic sign on the freeway from Albuquerque. It says, in large letters ‘GUSTY WINDS’and in smaller letters ‘may exist.'”

Nice blog -:) And sure...Breakfast was really nice -;) Thank again for the pin you gave me...Really cool!

I'm actually looking forward to get more involved into BPX...So I'm going to be a Geek with Suit clothing -;)