The Second Life of TechEd: And Then There’s the Dancing…

Yesterday, I opined in a blog comment that ustream.tv was the next-best thing to being at TechEd. Today, I’m inclined to differ. Although I didn’t actually *hear* the KPI session from 9:45-11am today in Second Life, I did see a lot of activity, and I even danced with a zebra… And judging by the quantity of people wandering around sick or about to be sick both in the office and at TechEd, I’d say attending events via Second Life has its advantages — if you can figure it out and get the audio to work. I arrived in SAP Second Life’s Open Forum conference room at around 9:30, and there were a few other people present already. Craigster and Payo Kayo were on stage, and Paulie Rowlands was wandering around the stage and in the audience. Frederic was there, smoking, and a couple of the Phloxs as well as Dash Fullstop were present.

There was a video playing on the screens in the front of the room about the KPI wiki. You can check out the Business KPI Community wiki right here on the SDN by going to the Wiki tab, then choosing Business Process Expert, then Business KPIs from the list of children.

Sadly, I never got my voice capabilities to work and since this was a voice session, I missed out on all the dialog. I went away to try to figure that out and when I came back, the session was wrapping up. That’s when the dancing started. By now the room had really heated up, and in addition to Payo and Craigster on stage, there were about 14 people and one large zebra named NonSmokerGirl in the audience. 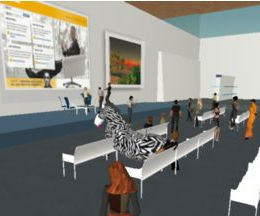 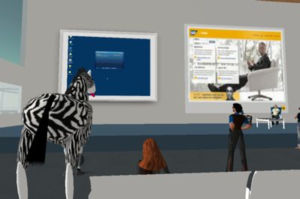 Since I couldn’t talk, I went ahead and tried some dance moves – and if you’ve never seen a zebra dance, I recommend it. NonSmokerGirl really knows how to kick it.

Eventually, there was a dance party of sorts in the aisle and more people were arriving for the Equipment Status Enterprise Widget Demo, set to start at 11am in Second Life as well as in Las Vegas.

I definitely plan to come back for the SDN and Adobe Hacker Night tomorrow night at 8:30pm — but this time I hope to have voice enabled. If not, I guess there’s always the dancing…