Tell you friends. Plus notes from Community Day

Of course it had to happen, I just didn’t thought it would happen already before the end of Community Day.

I walked back from the excellent Tim O’Reilly Keynote, psyched that Tim was wearing our “Go ahead, make my Community Day” shirt. He even briefly mentions it saying something like a company that is printing T-Shirt with such a slogan gets it.

By the way, my boss was saying: “You have to take a picture.”
My reply was: “I am crowd-sourcing that one. Someone will post a picture on Flickr.”

To my surprise so for I haven’t found one 🙁 May be it isn’t labeled correctly. Or Web 2.0 is a hoax 😉

On the way back to the our evening event of the Community Day I bump into Edward Herrmann who told me: “I just talked to a couple of my Colgate colleagues and they are bummed that  they didn’t know about the Community Day. They would have come too.”

That is just super sad. We have to work on a better promotion of our events.

Well, for Munich it is not too late. Tell your friends to sign up or add the Community Day to their TechEd conference.

I love this picture from the speed networking XI/PI table, where Doug Munford took out his laptop to show some connections that they have developed. Needless to say that this speed networking session spilled into the break. 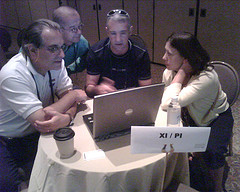 Quick notes: Humbling experience to get the critique from the back-channel about your own presentation performance.

Lot’s of people knew each other from last year already and they wanted to use the speed networking more to reconnect with old friends.

Once people have found their topic table during speed networking they cling to their seat.

May be fewer BoF tracks for less competition.

Very enjoyable was also the round-table of Geeks and Suits.

Tim O’Reilly was just Tim, as usual down to earth and very likable, that he was wearing out T-Shirt just made my Community Day.

There could have been some more and some tougher questions during the Townhall, but the re only the community is to blame.

Lot’s of laughter at the end with Boom Chicago with Me MySpace, iPod and I.

Oh and here are some short videos from the day.

Marilyn Pratt
October 3, 2007 at 1:38 am
Gali also has some. I posted the same night to our group Flickr pool. http://www.flickr.com/groups/sapteched/

Former Member
October 3, 2007 at 1:47 am
Again, it seems like SDN has outdone itself from previous TechEDs and events. I am in awe of how you keep on reinventing and improving the SDN concept.

It seems very strange being back here in Norway, but there was absolutely no way I could have made it this year.

Have a great time!