Don’t Make Me Come to Vegas: Searching for SAP TechEd in Second Life

Las Vegas is great for a lot of things. Like the Cirque. And the desert. And… SAP TechEd. But times are changing and this year I’m looking for Vegas without leaving my seat.

That’s right — several events at SAP TechEd 2007, which kicked off with Community Day today in Las Vegas, are also slated to take place in SAP’s The cat is out the bag, so to speak and we are in SL. In part thanks to this nearly incredible promise, I dusted off my avatar and took a crash course last week on how to walk without bumping into walls and fly without crash-landing. 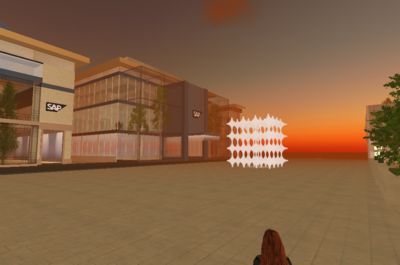 With those goals only half-achieved, I set off to Silicon City last Friday. SAP’s Second Life office is built in this city, which sits on the south side of Silicon Island and as such is almost completely surrounded by water. There seem to be three main SAP buildings: an Open Forum – a conference center of sorts, the main office across the street, and a building next to that. The sides of the offices drop straight down into the water (and I spent a significant amount of time flying out of this after misguided teleports).

On my first visit, I found another green dot on the map, indicating that another avatar was present. I eventually located him via awkward fits and starts in different directions. He promised me wonderous things if I would only follow him to some strange place. While I attempted to figure out whether I, a female avatar, should feel strange about this, the ambient color of the display turned red and dark. Figuring that I was about to crash my Second Life client, I started to bid my new friend farewell – but discovered that it was merely sunset. 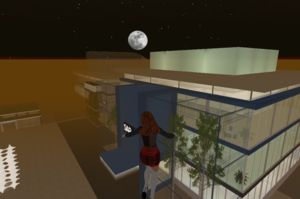 A low orange light filled the western sky and I wandered off alone to look at the view. I discovered that a large, true-to-phase waning moon was rising in the east and was a bit taken aback when I found myself admiring the view. I found a place to sit and quit the client for the day.

During my second visit to SAP’s Second Life office, I ran into a fellow SAP employee who works in the Walldorf office. Since I don’t have voice chat enabled, I have to type everything out, which makes for slightly awkward conversations. I’m also still learning how to move, and when I unintentionally kneeled on him he was undaunted and invited me to the Community Clubhouse Schedule Widget ’07 taking place in Second Life tomorrow at 9:45am, coincident with the “1st life” Vegas session.

This appears to be the hardest thing in Second Life so far (aside from walking and flying) – to locate what is happening where. Note that I have not hooked up with the all-knowing creator Craigster Hax yet, so I am still pretty much on my own, which hampers some of my exporatory efforts (this is a social medium, after all!). 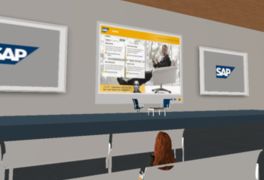 Now it’s Monday at 3:30pm PST and I’m taking a look around to see if anybody is here. They are not — I am still alone. Outside of the Open Forum, I hear birds chirping and the wind blowing. It looks like dusk. Why does the sun set at 3:30, I wonder? I say “good night” to the moon again, and I go back sit down in the Open Forum building, waiting… waiting for something.

Moya Watson
Blog Post Author
October 1, 2007 at 4:16 pm
alas -- within the (palo alto) mothership, i could never get the ustreams - even post-recorded! so i was reduced to wandering around alone in second life...

Moya Watson
Blog Post Author
October 1, 2007 at 5:36 pm
...for the nice offices, craig! it's quite beautiful there on the sea (and nicely situated with the southern exposure...). looking forward to seeing more people there tomorrow.