The SQL Trace, which is part of the Performance Trace (transaction ST05), is the most important tool to test the performance of the database. Unfortunately, information on how to use the SQL Trace and especially how to interpret its results is not part of the standard ABAP courses. This weblog tries to give you a quick introduction to the SQL Trace. It shows you how to execute a trace, which is very straightforward. And it tells how you can get a very condensed overview of the results–the SQL statements summary–a feature that many are not so familiar with. The usefulness of this list becomes obvious when the results are interpreted. A short discussion of the ‘database explain’ concludes this introduction to the SQL Trace. 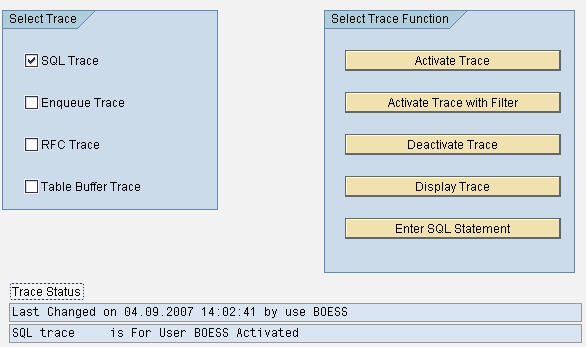 Note, the trace can also be switched on for a different user.

=> In this section we showed how the SQL trace is executed. The execution is very straightforward and can be performed without any prior knowledge. The interpretation of the results, however, requires some experience. More on the interpretation will come in the next section.

When the trace result is displayed the extended trace list comes up. This list shows all executed statements in the order of execution (as extended list it includes also the time stamp). One execution of a statement can result in several lines, one REOPEN and one or several FETCHES. Note that you also have PREPARE and OPEN lines, but you should not see them, because you only need to analyze traces of repeated executions. So, if you see a PREPARE line, then it is better to repeat the measurement, because an initial execution has also other effects, which make an analysis difficult.

If you want to take the quick and easy approach, the extended trace list is much too detailed. To get a good overview you want to see all executions of the same statement aggregated into one line. Such a list is available, and can be called by the menu ‘Trace List -> Summary by SQL Statements’.

=> The extended trace list is the default result of the SQL Trace. It shows a lot of and very detailed information. For an overview it is much more convenient to view an aggregated list of the trace results. This is the Summarized SQL Statements explained in the next section.

This list contains all the information we need for most performance tuning tasks.

The important measured values are ‘Executions’ (col. 1), ‘Duration’ (col. 3) and ‘Records’ (col. 4). They tell you how often a statement was executed, how much time it needed in total and how many records were selected or changed. For these three columns also the totals are interesting; they are displayed in the last line. The other totals are actually averages, which make them not that interesting.

For each line four functions are possible:

=> The Statement summary, which was introduced here, will turn out to be a powerful tool for the performance analysis. It contains all information we need in a very condensed form.  The next section explains what checks should be done.

4. Checks on the SQL Statements

For each line the following 5 columns should be checked, as tuning potential can be deduced from the information they contain. Select statements and changing database statements, i.e. inserts, deletes and updates, can behave differently, therefore also the conclusions are different.

For changing statements, errors are fortunately much rarer. However, if they occur then they are often more serious:

=> In this section we explained detailed checks on the statements of the SQL Statement Summary. The checks are slightly different for selecting and changing statements. They address questions such as why a statement does not use the table buffer, why statements are executed identically, whether the processing is slow, why a statement was executed but no record was selected or changed, and whether a statement is executed too often or selects too many records.

The ‘database explain’ should show the SQL statement as it goes to the database, and the execution plan on the database. This view has a different layout for the different database platforms supported by SAP, and it can become quite complicated if the statement is complicated. 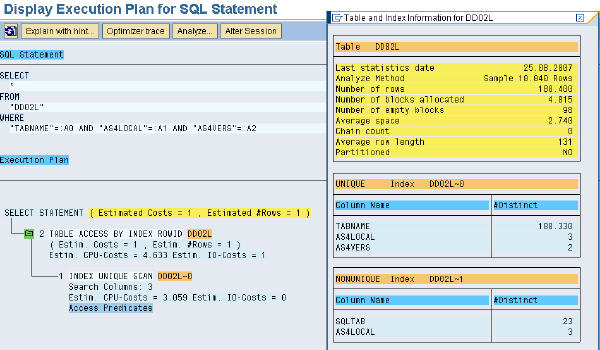 In this section we show as an example the ‘Explain’ for a rather simple index-supported table access, which is one of the most common table accesses:

Some databases display the execution plan in a graphical layout, where a double-click on the table gives additional information, as shown on the right side. There the date of the last statistics update and the number of records in the table are displayed. Also all indexes are listed with their fields and the number of distinct values for each field, with this information it is possible to calculate the selectivity of an index.

From this example you should understand the principle of the ‘Explain’, so that you can also understand more complicated execution plans. Some database platforms do not use graphical layouts and are a bit harder to read, but still show all the relevant information.

=> In this last section we showed an example of a database explain, which is the only way to find out whether a statement uses an index, and if so, which index. Especially in the case of a join, it is the proper index support that determines whether a statement needs fractions of seconds or even minutes to be finished.

Please try the SQL Trace by yourself. If there are any questions or problems, your feedback is always welcome!